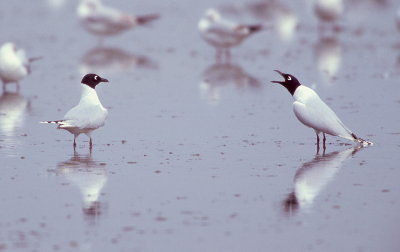 Despite prolonged national and international protests, South Korean President Roh Moo-Hyun has announced the resumption of a highly controversial project to reclaim the internationally important Saemangeum wetland for industrial development. Saemangeum is one of Asia's most important tidal wetland sites and the most vital on the Korean peninsula because of its critical importance for migrating threatened species.

Three years after work was halted on what is the largest reclamation project in the world (following warnings over resulting water pollution and damage to fisheries), construction of a 33-km dyke has been continuing. By the time of its proposed completion, which could be as early as next year, the most important shorebird site in the Yellow Sea will be entirely lost, with very serious consequences for eight globally threatened species dependent on the wetland.

Among these, a recent count found the world's highest numbers of the Spotted (Nordmann's) Greenshank Tringa guttifer, which numbers fewer than 1,000 globally and is classified as Endangered. Other rare species to be found at Saemangeum (all classified as Vulnerable) include large numbers of Saunders's Gull Larus saundersi, Baikal Teal Anas formosa and an estimated 10% of the global population of Spoon-billed Sandpiper Eurynorhynchus pygmeus. In addition, Saemangeum supports around 30 other species of waterbirds, including more than 80,000 Great Knot Calidris tenuirostris.

The South Korean Government argues that it is too late to stop the project and that local people want the wetland to be developed as an industrial zone. It claims that planned artificial lakes and undeveloped water reserves will maintain bird populations. However, BirdLife International completely refutes these assertions. "The ecological value of Saemangeum is as a wide tidal flat comprising two free-flowing estuaries that supports an important percentage of migrating shorebirds. Artificial lakes are a completely different habitat, and threatened species such as the Spoon-billed Sandpiper and Spotted Greenshank cannot thrive in such a different environment," comments Simba Chan, an expert in Korean bird conservation from the Wild Bird Society of Japan (BirdLife in Japan). "Also, it is certainly not too late to abandon the project, and many, many Koreans, as well as all local environmental organisations are against the reclamation."