One of the UK's favourite butterflies — the Small Tortoiseshell, continued its fight back this summer after years of decline, despite enduring the coldest August since 1993, results from the Big Butterfly Count have revealed. The species' population has declined by 78% since the 1970s, but saw numbers rise by almost a quarter compared to last summer, making it the fourth most commonly seen species on the Big Butterfly Count. This is the highest-ever ranking for the Small Tortoiseshell in the Count — the world's largest annual insect citizen science survey — and represents an amazing comeback for a species that had become scarce in parts of southern England. 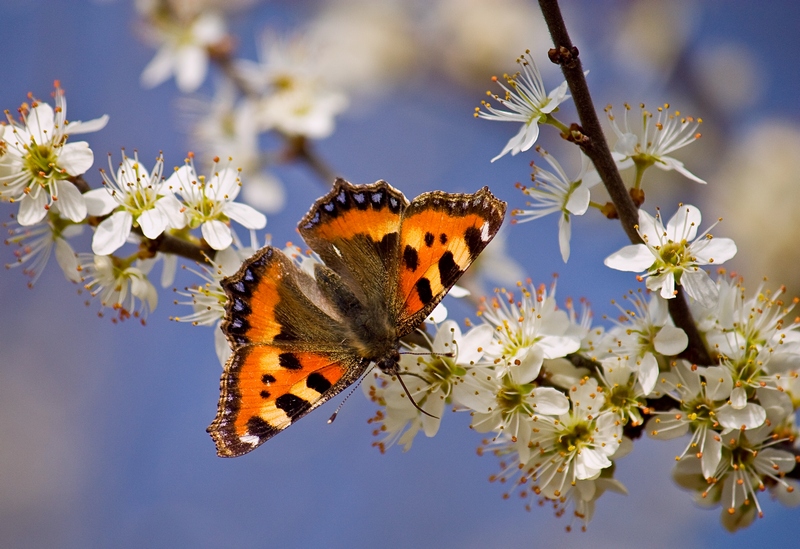 Despite a warm July, August was the coldest for more than 20 years according to the Met Office. This drop in temperature had a knock-on effect on the majority of the UK's common summer butterflies, curtailing the flight period of some species and hastening others into early hibernation. The average number of individual butterflies seen per-count dropped from 23 in 2013 to 15 in 2014. In all, 15 out of 21 of the target species decreased compared with 2013, only six species increased year-on-year.

The big winners were the Common Blue (up 55%), Red Admiral (up 43%), Speckled Wood (up 28%) and Small Tortoiseshell (up 22%). The summer was also good for Peacock, which was the most abundant butterfly in this year's Count — its highest-ever placing. The common white butterflies all recorded a disappointing summer. The Large White was down by 65%, the Small White by 60% and Green-veined White by 47%. The Count's two migrant species — Painted Lady and Silver Y moth also had a lacklustre year.

Nearly 45,000 people took part in this year's Big Butterfly Count, spotting almost 560,000 butterflies during the three-week recording period. Although the majority of species declined compared with 2013, most were still well above levels recorded during the washout summer of 2012. Butterfly Conservation Surveys Manager Richard Fox explains: "After a good summer in 2013, the big question this year was whether butterflies would continue to recover and build up even greater numbers or slip back again. Thanks to another amazing turnout from the public, we know that the answer is a real mixture. The Small Tortoiseshell had a good year in 2013 and this seems to have acted as a springboard for the species, enabling it to increase massively again this summer. It's fantastic news for a species that has lost three-quarters of its population since the 1970s. Others such as the Gatekeeper held their ground this year, but sadly, many common butterflies appear to have sunk back from last year's peak in numbers."

For the fifth year running, the Big Butterfly Count took place in partnership with Marks & Spencer as part of its Plan A commitment to be the world's most sustainable major retailer by 2015. Mike Barry, M&S Director of Plan A said: "At M&S we're always keen to ensure our business makes a positive contribution to the environment. Supporting the Big Butterfly Count is a great way to engage our customers, farmers and employees on the importance of butterflies and we're pleased that so many of them took part in this year's count. It's great to see the Small Tortoiseshell stage such a successful comeback and we want to keep working hard to ensure that butterfly numbers overall pick up again in 2015."