The start of the year began just as it had ended, with the continuing, crisp, snowy spell of weather across Shetland and indeed, most of the United Kingdom. I was eagerly optimistic that our isles could well be graced with an exotic Arctic visitor, maybe a Ross's Gull, Gyrfalcon or Snowy Owl. My mind drifted back to last winter's delightful Ivory Gull, which I discovered on my native island of Fetlar. Shetland can be such an exciting place at any time of the year! 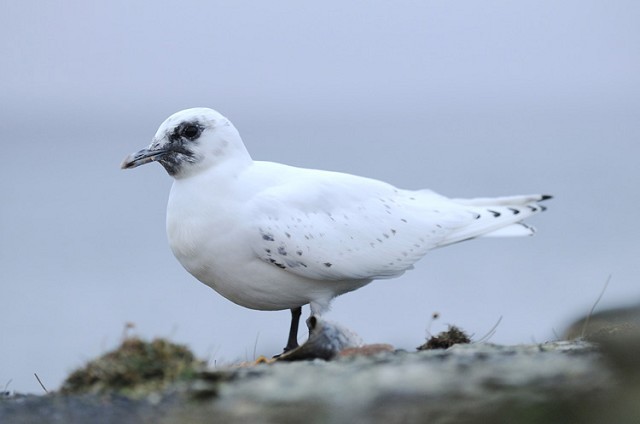 Then on 4th January I received a phone call from Ian Nicholson of Aywick, Yell telling me of an 'unken' (unusual) seal hauled out on a grassy bank right up at the head of the Mid Yell Voe. It seemed that our visitor from the Arctic was to be in 'flippered' not feathered form! Although not certain, Ian had seen one over a decade before on the exact same bank, and was fairly sure it was a Bearded Seal. Fortunately, along with my wife Vaila and two month old son Casey, I happened to be on the island of Yell at the time, just about to board the ferry to Fetlar from Gutcher. Needless to say we rapidly pulled out of the queue of cars and did an about-turn! Knowing Ian's keen eye for sea mammals and having waited many years to connect with this very rare visiting Arctic seal, obviously, we wasted no time and went straight there.

On arrival a quick scan along the bank Ian had directed us to immediately revealed the seal, still hauled out on the snow-covered bank. It was indeed a Bearded and a wonderfully authentic encounter for us as we enjoyed our first-ever Bearded Seal as the snowflakes fell all around us. Given the weather conditions and landscape, it could just as easily have been Svalbard or the Canadian Arctic we were in, and for a moment it felt like it was! 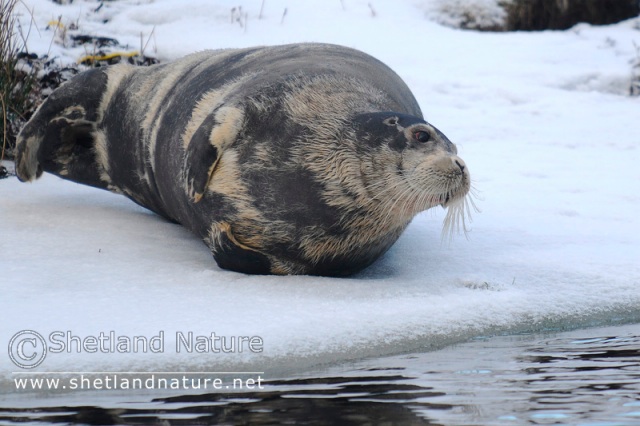 This record represents the 12th occurrence of this very rare visitor from the Arctic in Shetland, and the third for Mid Yell. It was first recorded in the Isles in 1956. The most recent sighting was in 2007 but, unfortunately, after its identity was confirmed news of the seal's week-long stay was not released. On this occasion we released the news immediately and therefore this year's animal has delighted many observers since and has been regularly reported on BirdGuides. It is still present at the time of writing. Incredibly another has been visiting Orkney over the same period.

Away from Shetland there are a mere handful of records, with fewer than half a dozen sightings since it was first recorded in England in 1892. It has only reached the shores of Ireland on one occasion. 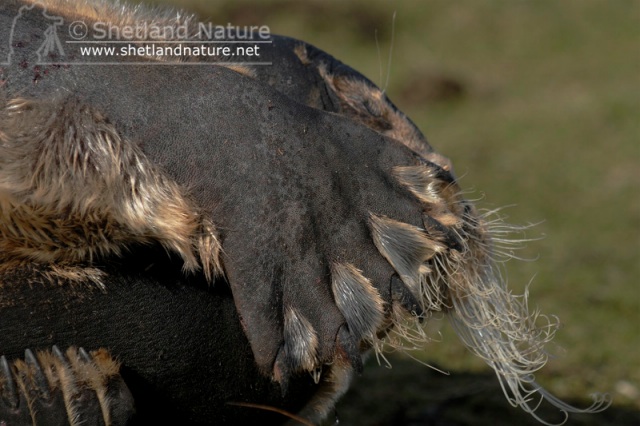 Across the Arctic, where it has a fairly widespread distribution, it is a primary food source of the Polar Bear and also for many of the Inuit people living traditionally along the Arctic coasts. Bearded Seals can reach up to 2.7m in length and weigh up to 340kg when fully grown. Unlike most seals, there is little or no difference in the size of males and females. The majority of food is found on the sea-bed, where they use their charismatically long whiskers to sense and feel for food, which consists mainly of squid, clams (and other shellfish) and fish at depths of 450m or more.

So what does next winter have in store? Personally I am praying for a male Walrus. But the fascination of wildlife watching here means every day is different: we'll never know until it happens! 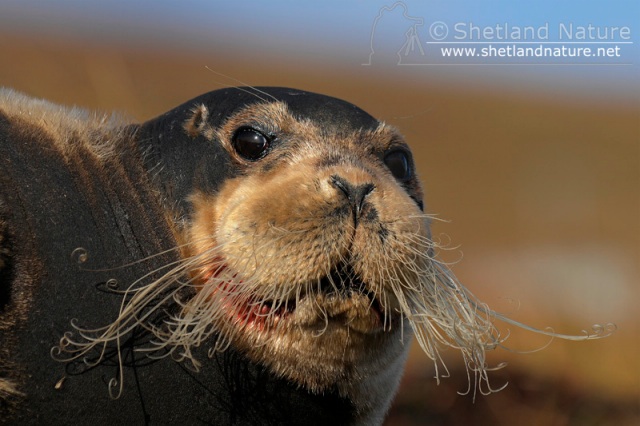