Twelve young Scottish Osprey have been released on the north Spanish coast near Bilbao, as the first stage of a five-year project to restore breeding Ospreys to the Basque Country. Last year, the Biscay Regional Council and the Urdaibai Bird Center asked Scottish Natural Heritage (SNH) for permission for the project. SNH issued a special licence in 2013 to Roy Dennis of the Highland Foundation for Wildlife to collect 12 young Ospreys from nests with more than one young in the Scottish Highlands and Moray.

In the past 10 days, the 12 Ospreys have all been released in the Basque Country — on the Urdaibai estuary to the north of Bilbao — and are faring extremely well. Five days after being released, one of the birds has even caught its first fish in the estuary. Once released, the young birds were able to come back to nest platforms containing a daily supply of fresh fish which they would take away and eat, as if a parent had provided food for them. The Urdaibai estuary is regularly used by migrating Scottish Ospreys, travelling to and from West Africa in spring and autumn. In fact, it was the temporary home in spring 2008 of the famous Osprey Logie, tracked by Roy Dennis using the first GPS satellite transmitter fitted to a British Osprey. At that time Aitor Galarza, who is now involved in the Osprey reintroduction, found and photographed Logie. This resulted in a partnership between Scotland and the Basque Country to restore breeding Ospreys. 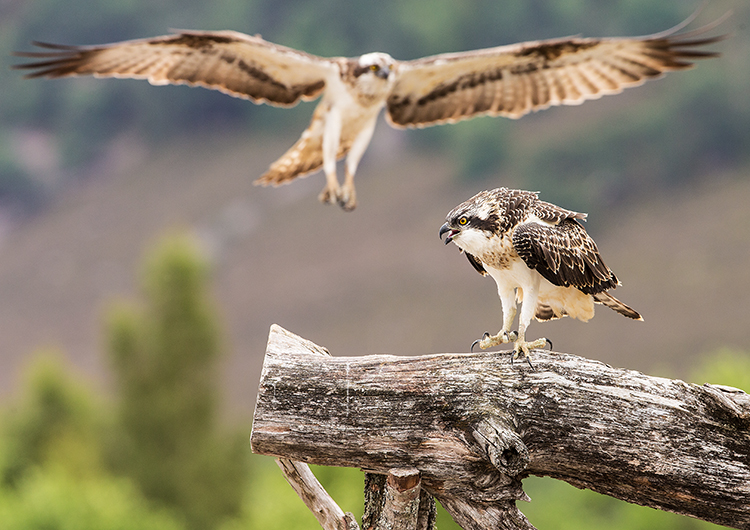 Scottish Ospreys have been used to supplement a Spanish re-introduction (Photo: John Fielding)

This project follows the successful reintroduction of Ospreys to Andalusia in southern Spain, which involved birds from Germany, Finland and Scotland. The first pair to breed in 2008 was a Scottish female and German male. In 2013, the project team in Andalusia identified 13 breeding pairs. The species had been extinct for many years in mainland Spain. Roy Dennis commented: "It's been really great that we have been able to help the Basque people try to restore breeding Ospreys and we are very grateful to SNH for their support and to all the people who helped us with the collection and translocation. We wish the project success."

Susan Davies, SNH's Director of Policy & Advice, added: "Ospreys are doing well in Scotland, so we're in a terrific position to be able to help reintroduce these wonderful birds. A population of breeding Ospreys in the Basque Country should make the overall population in Europe stronger," while Dr Aitor Galarza, the project director, commented: "We are so pleased that we have young Ospreys flying in Urdaibai Biosphere Reserve at the start of an exciting project. There is huge public interest and we are most grateful to Scotland for their support."

In early July this year, suitable nests were visited between Caithness and Strathspey and 12 young birds were selected. They came from nests on private land or Forestry Commission Scotland land. Birds were inspected by Jane Harley of the Grantown-on-Spey vet practice on 8 July and at dawn the next day they were taken to Aberdeen airport and flown by British Airways to Heathrow. Roy Dennis and Dr Aitor Galarza from the Biscay Department of the Environment accompanied the Ospreys and were able to feed them en route to Spain at the Animal Reception Centre at Heathrow Airport.

Later that night, they reached the specially built cages overlooking Urdaibai estuary to the north of Bilbao. Three birds were placed in each cage and were fed by the bird centre staff on fresh fish delivered through openings in the back of cages. The young Ospreys were unable to see the people feeding them and during July they grew to full size, learnt to fly and were able to watch activities on the estuary.