Scots are being urged to report any sightings of Hen Harrier, one of Britain's rarest and most threatened birds of prey.

Male Hen Harriers perform a spectacular, acrobatic courtship display which, together with the graceful and seemingly effortless flight of the birds, have earned them the nickname 'Sky Dancer'. They used to be a familiar sight on Scottish moorlands, but the latest numbers indicate there are only around 500 pairs. Factors affecting the birds' survival include illegal persecution, a loss of nesting habitat and feeding ranges, and foxes, crows and other predators eating eggs and young. 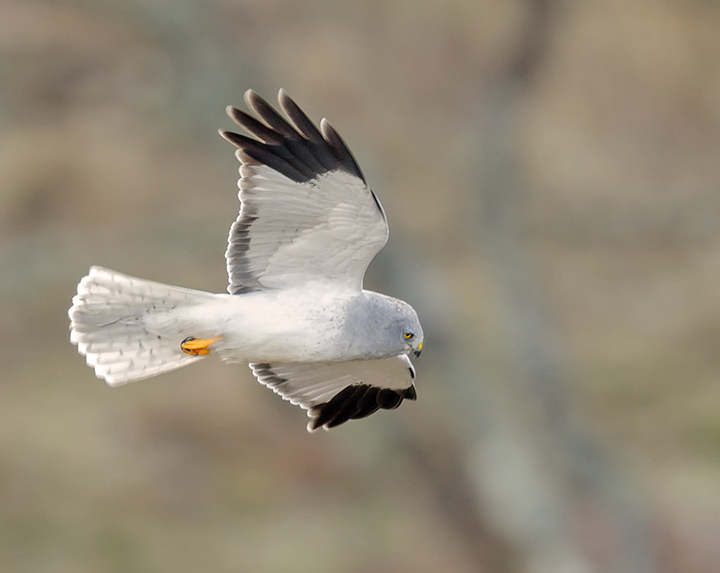 In response, the Partnership for Action Against Wildlife Crime Scotland (PAW Scotland) has set up a 'Heads Up for Harriers' group. It is raising awareness of this majestic bird, determining the current number of Hen Harriers in Scotland, and identifying specific threats to their survival, so resources can be directed to safeguard and ultimately increase the population.

"Several national surveys of Hen Harriers have found they are faring well in some areas, but declining or absent all together in others. In some places, there are no harriers at all because of persecution and a range of other factors. Working within PAW Scotland, we're trying to develop a clearer picture of the distribution of harriers, and the work needed to improve their prospects."

"Although we receive a lot of records from members of bird groups, we need to add to these to get a complete picture of how Hen Harriers are faring in Scotland. We ask people to email any sightings to us at HenHarrier@snh.gov.uk or call 07767 671973. This will help us improve our understanding of where harriers are seen and then remain to nest, move on or die for natural or persecution-related reasons."

"The Heads Up for Harriers Project is engaging all sectors of the uplands, including landowners and managers, conservation organisations, ornithologists and where necessary enforcement organisations. This initiative builds on other projects such as The Langholm Moor Demonstration Project, which is the main test bed for new management techniques which will help to ensure long-term security for the harrier alongside other moorland management objectives and where landowners are playing a leading role. This year, five of our members in different parts of Scotland are working with SNH staff to use time-lapse nest cameras to try to discover reasons why harrier breeding attempts are prone to failure. It is by working together in such projects that we can secure the future of these special birds."

Wendy Mattingley of the Scottish Raptor Study Group (SRSG) is collating and following up on these reported sightings, and commented:

"I urge people to reports any sightings of Hen Harriers — they are wonderful birds to see on the hill, and we are determined to do what we can to extend the distribution of these birds."

How to identify and report Hen Harrier sightings

Male Hen Harriers (see above) are distinctive, with a pale, ash-grey colour, black wing tips and a wingspan of just less than a metre.

Female Hen Harriers are slightly larger, with an owl-like face and mottled brown plumage, which helps to camouflage them when they nest on the ground. They have obvious horizontal stripes on their tails. 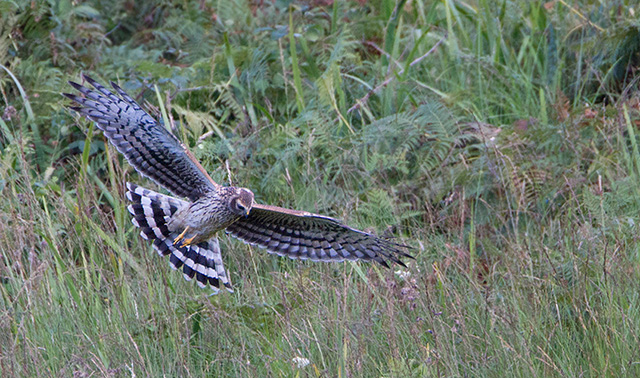 Email sightings of Hen Harriers to HenHarrier@snh.gov.uk or call 07767 671973. Please provide details of places where birds are seen (a six-figure grid reference is best), the time and date of the sighting and any notes on behaviour (for example hunting low, flying high up, calling or skydancing) when possible. For more information, see http://www.gov.scot/Topics/Environment/Wildlife-Habitats/paw-scotland/what-you-can-do/hen-harriers