Sixteen White-tailed Eagle chicks, gifted to Scotland from Norway as part of a major reintroduction project, have been settling into their temporary home at a secret location in Fife. The eaglets, welcomed at Edinburgh Airport on Friday [24th June] by Norwegian Consul Mona Røhne and Environment & Climate Change Minister Stewart Stevenson, are the latest additions to the East Scotland Sea Eagle reintroduction programme, a partnership between RSPB Scotland, Scottish Natural Heritage and Forestry Commission Scotland.

Now in its fifth year, the initiative has been reintroducing the species to eastern Scotland, with the long-term hope of restoring the birds across the full extent of their former range. After travelling from nests in Norway to Edinburgh on Friday, the chicks were taken to purpose-built aviaries, where they will remain until they are strong enough to fledge.

Stewart Stevenson, Minister for the Environment & Climate Change, said: "The reintroduction project has been a long haul but the care and effort invested has achieved remarkable results — the White-tailed Eagle is now a frequent and glorious sight in Scotland's skies. Undoubtedly a major draw — both for local and visiting wildlife watchers — the return of these magnificent birds to take their place in Scotland's rich biodiversity has also provided a significant tourist attraction. This successful programme strengthens the link between us and Norway and I would like to thank them for their continued contribution to Scottish wildlife. I would also like to congratulate the partner organisations for their hard work in restoring this iconic species to Scotland and hope to see them flourish further in the years to come."

For the first time, an official representative from Norway was there to greet the young eagles on Scottish soil. Norwegian Consul Mona Røhne added: "Norway and Scotland have a long-standing collaboration in releasing White-tailed Eagles in Scotland and we are delighted yet again to see the arrival of the Norwegian White-tailed Eagles from the west coast counties of Hordaland, Sogn og Fjordane and Møre og Romsdal. In Norway you will find White-tailed Eagles in the southwest region of Vest-Agder up to Finnmark in the north, with Bodø city having the largest population in the world. We are thrilled to know that we have played a part in helping to bring back White-tailed Eagles to Scotland." 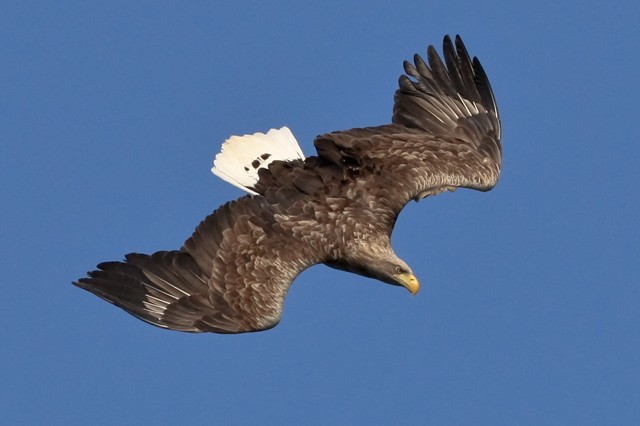 Affectionately known as 'flying barn doors' due to their massive 8-foot wingspan, White-tailed Eagles were only reintroduced to Scotland in 1975 having previously been wiped out by human persecution. Recent figures show that there are now a record-breaking 52 breeding pairs in Scotland. Although the majority of the Scottish population remains in the west of the country, the species is now regularly spotted in eastern and central Scotland too.

Claire Smith, RSPB East Scotland Sea Eagle Officer, explained: "All the birds in the east-coast population are fitted with radio and wing tags so we can keep track of their movements. Since the project began in 2007 we've had well over 2500 reported sightings; this includes birds in the surrounding area of Tayside and Fife, but also further north in places like Orkney and four birds have wandered into northern England, being spotted in Northumberland, on the Solway and Lincolnshire. We're also pleased to see that east- and west-coast populations are mixing, which is a positive sign for the future."

Susan Davies, SNH's director of policy and advice, said: "So much has been said about these fantastic birds but nothing quite captures what it's like to see one soar above you, with their amazing two-and-half metre wingspan. It's quite an achievement to see such a reintroduction success with over 50 breeding pairs and 200 White-tailed Eagles now in Scotland, and more eaglets bolstering these numbers. It's also essential that conservationists continue to work with landowners and farmers into the future to ensure that this spectacular bird's future is secured for future generations."