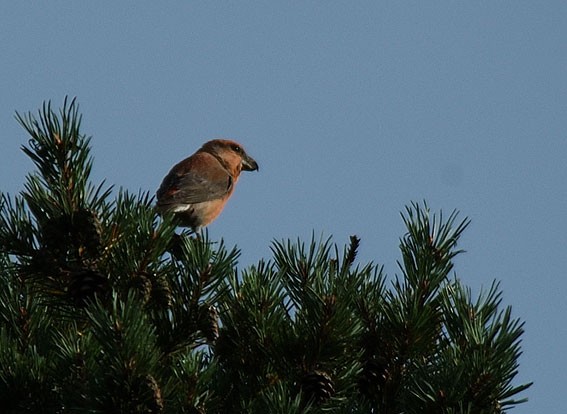 A lengthy scientific study by the RSPB has helped to settle one of the longest-running disputes in ornithology, confirming that Britain possesses a unique species of bird: the Scottish Crossbill.

Researchers have discovered that just like native Scots, these Highland finches have a distinctive 'accent' when compared with crossbills from other parts of Britain. The distinctive call is thought to be the way Scottish Crossbills ensure they only pair with mates of their own species.

Although the British Ornithologists Union - the organisation which maintains the British bird list - has classed the Scottish Crossbill as a distinct species since 1980, many ornithologists, including RSPB scientists, have always believed there was insufficient scientific research for its formal acceptance.

The quest to establish whether Britain has it own unique species of bird has been complicated by the fact that Scotland's conifer woods are home to three types of crossbill, each with a differing bill size used by the birds to extract seeds from different types of conifer. The Common Crossbill - a widespread bird in the UK - has the smallest bill, best suited to extracting seeds from spruce cones. The Parrot Crossbill has the largest bill for prizing seeds from pine cones, while the Scottish Crossbill - with its intermediate bill - can extract seeds from the cones of a variety of conifers. All three finches are similar in size and plumage, and DNA tests have showed that the birds are genetically similar, casting prolonged doubt on the Scottish Crossbill's status as a distinct species.

The small differences in bill size cannot be used reliably in the field by ornithologists to identify crossbills. The calls, though, can be distinguished by sonograms, or sound pictures, made from recordings. Crucially, this provides the basis for a method to survey crossbills and, for the first time, gain a clear picture of their numbers and distribution in Scotland.

The next steps in the Scottish Crossbill study are to establish the bird's population size and habitat requirements. With the current world estimate of only 1,500 birds being little better than a guess, a detailed survey is vital to understand what is required to ensure this bird's survival.

RSPB Scotland's senior researcher Dr Ron Summers, who led the study, said: "This research proves that the UK is fortunate to have just one bird species that occurs here and nowhere else - this is significant."

"Now that we have shown the Scottish Crossbill exists and is endemic, we must focus our conservation efforts in making sure that it not only survives, but flourishes and that Scotland has plenty of the habitat that supports and maintains the population of these birds, of which we should be justly proud."

Dr Jeremy Wilson, head of research for RSPB Scotland, said: "RSPB Scotland hopes to carry out the first full Scottish Crossbill survey in 2008, after which we will be better placed to understand how best to manage conifer woodlands in Scotland to secure the future of a bird found nowhere else in the world."