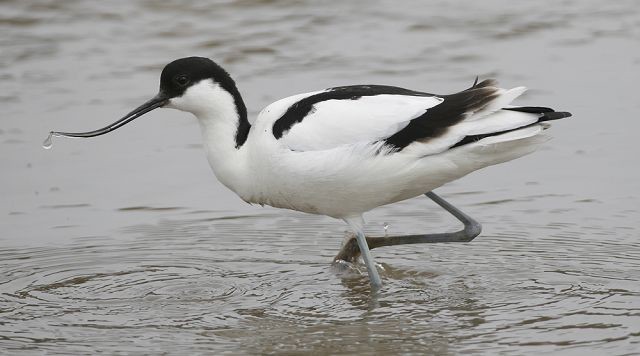 The changing currents of a tidal river are threatening to swamp an RSPB reserve - and its important population of birds.

Read's Island in the Humber estuary is being eaten away by the river and rising sea levels could now accelerate the process. As a result, the reserve looks set to disappear in the near future. The reserve is a home for Avocets - the bird on the RSPB's logo and an icon of bird conservation - which breed on its rare saline lagoons. About 100 pairs breed on the island out of a UK population of around 1,000 breeding pairs.

The fragility of wildlife habitats on the Humber has been further highlighted by the news that the RSPB's other reserve on the Estuary - Blacktoft Sands - has been flooded. A high spring tide swept in to the reserve on Thursday night, raising water levels in the reedbeds by more than half a metre and washing away the nests of the reserve's Bearded Tits. Staff at the reserve reported that the frantic nest building and feeding of recent days had been replaced by silence. The hope is that the flood has come early enough in the season that the little birds can rebuild nests and breed again.

More serious is the situation facing Read's Island and its Avocets. This year is the 60th anniversary of the Avocet's return to the UK in 1947, a century after it was driven to extinction by land drainage, hunters and egg collectors. When Britain faced what seemed to be certain invasion in the 1940s, the coastal marshes of East Anglia were flooded to hinder the German troops. This also provided ideal habitat for the Avocet, which took the opportunity to mount its own invasion of the suddenly deserted coast. Protection by the RSPB at Havergate Island and then Minsmere in Suffolk, allowed the birds' range to gradually increase, with breeding populations concentrated around saline lagoons, like those found on Read's Island.

The imminent loss of Read's Island to the Humber threatens to put more pressure on the area's Avocets, which already face losing habitat to the man-made problem of sea-level rise. Every year the UK is losing hundreds of hectares of coastal habitat to the sea and the RSPB is among those organisations working to create more. On the Humber, new habitat is being created in anticipation of future losses through the managed realignment of flood defences by the Environment Agency. This should act as a 'pressure release valve' for the estuary and offer new homes for birds like the Avocet.

The RSPB is supporting this process through a project called Coastal Futures, which involves local people on the Humber in discussions about the inevitable changes to their coastline that sea level rise will bring. Dr Mark Avery, the RSPB's director of conservation said: "The 60th anniversary of the Avocet's return to the UK is a cause for celebration, but it is also a reminder that we have already lost this bird once. While the loss of Read's Island to the scouring force of the River Humber may be entirely natural, it is happening at a time when our coasts are being destroyed by rising seas caused by climate change. To the Avocets, the result is the same - nowhere to nest. This combination of natural and manmade loss shows just how important it is that we all work together to create new wildlife habitat, to help shield vulnerable species like the Avocet from the pressures of climate change."

On the Humber, Avocets bred at the mouth of the river Trent in 1837 but had their eggs stolen and one adult bird was shot. After a 155-year absence, they returned to breed at Blacktoft Sands in 1992 and the population has increased to over 200 pairs around the estuary.
Written by: RSPB
Login to leave a comment
Return to List