As some of Britain's most-watched Ospreys return, the Wildlife Trusts offer a guide to the best places to catch up with these impressive birds over the summer.

One of the first regular birds back on territory was '03(97)', landing back at Rutland Water on 20th March. This bird fathered the first Osprey chick to hatch in England 10 years ago, and has since successfully raised 23 chicks with three different females.

Britain's oldest breeding Osprey — named Lady — returned to Loch of the Lowes on Monday [28th March], her 21st consecutive season. Lady is 26 years old, and only last year gave webcam viewers a scare when she appeared close to death on the nest. But she made a miraculous recovery and now looks no worse the wear for having made yet another arduous journey to and from West Africa. In her 26 years, Lady has laid 58 eggs, successfully fledging 48 chicks.

Staff and volunteers at Cors Dyfi Nature Reserve, run by Montgomeryshire Wildlife Trust, expect to see the return of their birds over the next week and it is hoped that 2011 will see the second breeding pair ever recorded in Wales.

Many sites now have live webcams, which give a unique insight into the family life of Ospreys, from hatching right through to fledging. In some places, cameras also help monitor the birds as part of 24-hour surveillance operations, including at night through infra-red pictures. Nest cameras can make for exciting viewing and all from the comfort of your own home or on site at The Wildlife Trusts' visitor centres.

Where to see Ospreys with The Wildlife Trusts

England: Lyndon Nature Reserve in Rutland offers two fully accessible hides overlooking a nest where a pair raised three chicks last summer. The Rutland Belle also offers 13 evening cruises and four early-morning cruises from May to August 2011: a great way to see fishing Ospreys. You can find out more on the website. Leicestershire and Rutland Wildlife Trust's Rutland Osprey project shows live CCTV images from the nest on a big screen in the Lyndon Nature Reserve Visitor Centre and also on the project's website. You can also follow them on Twitter. 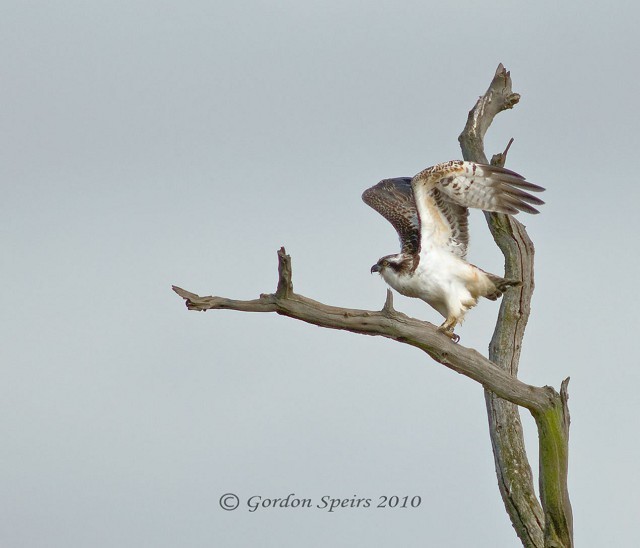 Wales: Cors Dyfi Nature Reserve offers nest-viewing through telescopes from the purpose-built hide or via the nestcam on large screens in the visitor centre. The artificial nesting platform was erected by Montgomeryshire Wildlife Trust in 2007 on the saltmarsh next to the Dyfi Estuary. Both returning Ospreys are unringed, so their ages and origins are unknown, but staff and volunteers use plumage patterns to identify them. One bird also has orange eyes instead of the usual bright yellow of an adult Osprey. Find out more on the web, via Twitter, or Facebook.

Scotland: Scottish Wildlife Trust's Loch of the Lowes nature reserve, near Dunkeld, offers a bird's-eye view to the nest of Britain's oldest-known breeding Osprey. Hides overlook the Perthshire loch and footage from the nestcam is streamed live to the visitor centre and online, so bird-watchers can follow all of the action throughout the breeding season. Visit the project blog or watch the live webcam.

April: Once settled, the female will lay between one and four eggs during the first part of April. Five weeks later the chicks will hatch. To complete his breeding duties, male Ospreys must provide food for the female as she sits on the nest, bring sticks to maintain the nest's condition and protect the nest from other males, known as interlopers.

July: After hatching in late May to early June, the fledging period is another great time to visit. Many hides are quite close to the nests which mean visitors may be treated to really spectacular views of the juveniles' first flights and progress as they master the art of flying and fishing before heading off to Africa in late August to September.

September: Over the last decade, Ospreys have spent increasing amounts of time in the Lee, Colne and Mimram valleys, north of London, during their autumn migrations. The quality wetland habitats provide fish and plenty of waterside trees where the birds can roost, and Herts and Middlesex Wildlife Trust have also installed three artificial nesting platforms at key sites in the counties. In recent years, the most regular migration site is the Mimram Valley between Hertford and Digswell. Look for Ospreys from the car park at the bottom of Thieves Lane in Hertford. From here there are wide and long-ranging views west along the valley.