The White Stork Project has announced that one of its reintroduced birds has reached Africa.

The stork, named Marge, crossed the Strait of Gibraltar on 23 September and has been lingering in northern Morocco ever since.

Marge was one of 24 juvenile White Storks released in Sussex and Surrey back in August with the hope of re-establishing a population of this impressive species in Britain, following an absence of some 400 years. 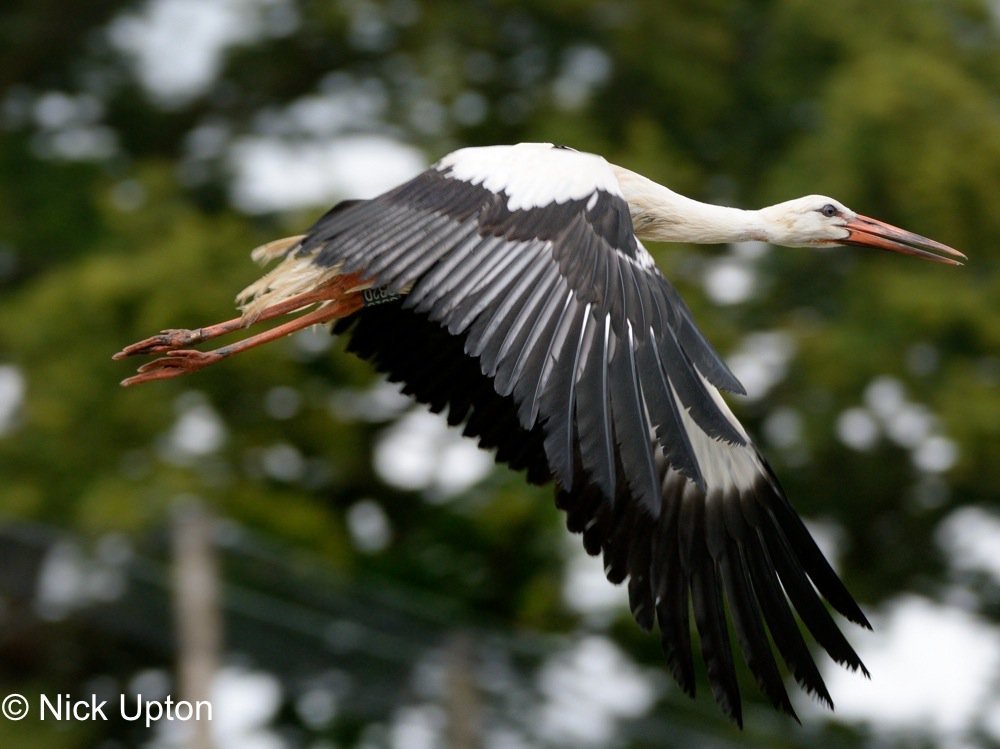 Marge can be recognised by her colour ring, inscripted 'GB2D'. Here, she is pictured on release in August (Nick Upton / White Stork Project).

Marge's epic journey began on 15 August, when she crossed the Channel to France – just two days after being released. She meandered south-east for a couple of days before making a distinct southward turn on 19 August – it is at this point that the White Stork Project team believe she encountered a migrating flock of wild White Storks, joining up and migraing south with them.

By 23 August, Marge was in north-east Spain, reaching an area south of Madrid by 27th. Here she lingered for a fortnight, rarely straying far from a landfill site at Alcázar de San Juan. Landfill has become an important source of food for White Storks in Spain, with many now opting not to migrate further south and instead linger at these man-made food sources throughout the colder months.

However, rubbish dump life was not for Marge and she left to the south on 13 September, lingering in the Seville area for five days from 14th. The 23rd represented a milestone day for the Project, for Marge plucked up the courage and made a successful crossing of the Strait of Gibraltar. She settled near Rabat shortly afterward, where she initially frequented a rubbish dump but has subsequently been ranging more widely around the area until at least 23 October. 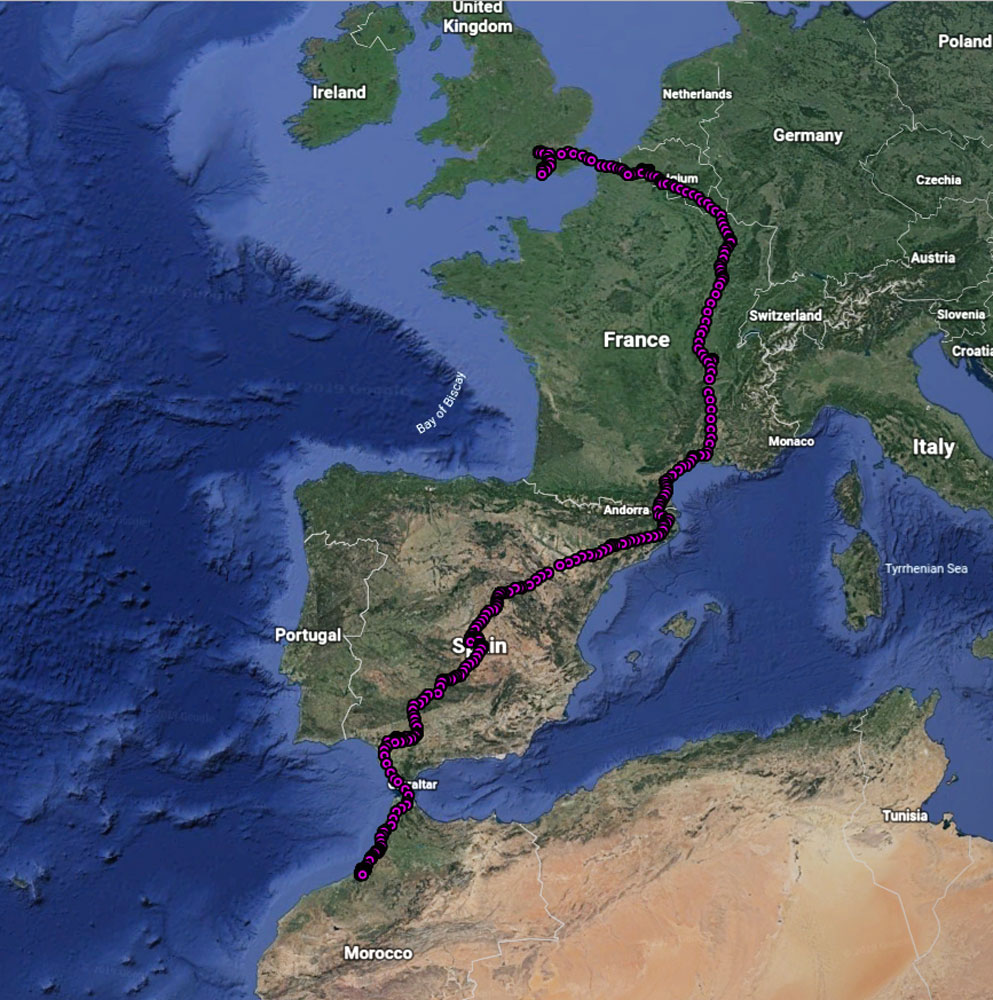 Lucy Groves, Project Officer for the White Stork Project, commented: "We have all become quite addicted to logging on in the morning to look at the GPS tracks to see where Marge is. The day she crossed the Strait of Gibraltar was a momentous day for us all here at the White Stork Project and we are over the moon that she has become our first juvenile to migrate to Africa!

"By using the GPS tags we are able to monitor the individuals, investigate foraging and movement behaviour and identify management measures which will enhance the success of the reintroduction.

"We are excited to see whether Marge continues south or stays in Morocco and we will be watching expectantly early next year in the hope that she will return."

As well as Marge, the team has been keeping an eye on the other individuals from the release. GB8E, a young female from the release, spent a week or so at Sunnyside Farm near Arne, Dorset, where she put on a show to large numbers of visitors. GB8E has since moved south-west to Porthcurno, Cornwall, where she is being seen on a near-daily basis. Another of the juveniles returned to Knepp early in September and is spending its time exploring the surrounding area with the free-flying adults on site. 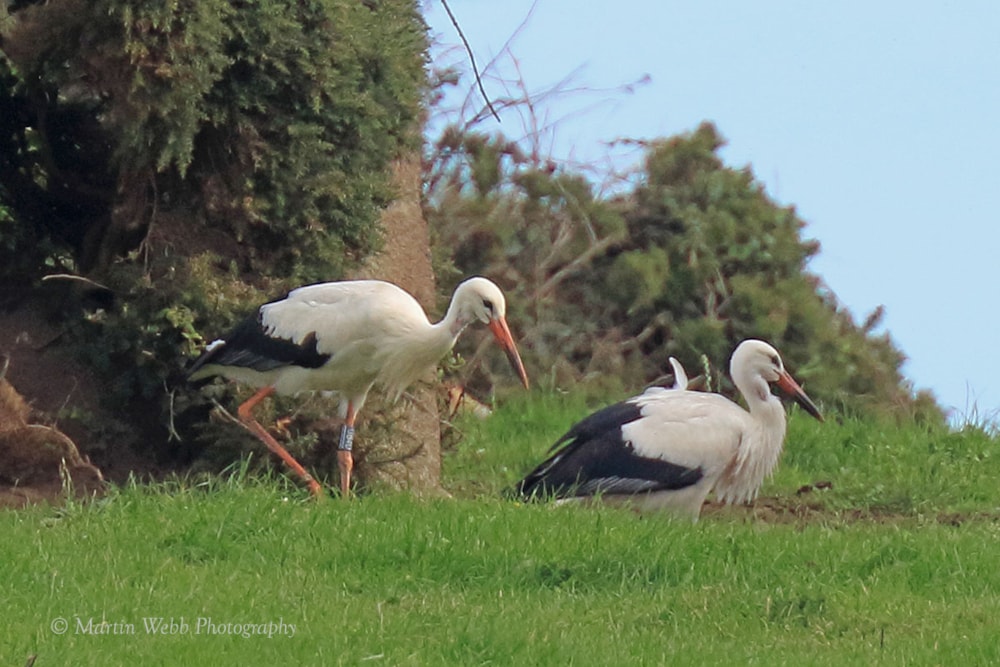 Several of the Knepp White Storks ended up in Cornwall in late August and early September, with some seemingly crossing from there to France (Martin Webb).

However, it is believed that other storks also crossed the Channel in late August. Lucy Groves explained: "We have had reports coming in from both France and Spain.

"Unfortunately, as we only have a handful of birds with GPS tags and we are relying on sightings of rings, it is difficult at this stage to determine the success of these individuals. However, we will have our eyes to the skies early next year in the hope that they return to Knepp on their spring migration.

"We would like to thank everyone who has posted tweets, emailed, reported sightings and sent photos to us; it has been vital to the project and we have been blown away by the support from the birding community."

To report a colour-ringed White Stork, please send as much detail as possible (date, nearest postcode/grid reference/GPS, plus ring number and colour) and any photos you may have to whitestorksgb@gmail.com or report the sighting via the website at www.whitestorkproject.org.