New figures compiled by RSPB Scotland and Scottish Natural Heritage reveal that in 2011 there are 186 breeding pairs of Red Kite in Scotland, a rise of 22 on the previous year. During this year's breeding season, a record 314 young fledged, the highest since reintroductions began in Scotland in 1989. The Red Kite reintroduction programme is arguably the most successful scheme of its type in the UK and perhaps also more widely in Europe. It is now estimated that, following reintroductions, the UK holds between 7 and 10% of the world Red Kite population. Highlights of the 2011 season in Scotland included: 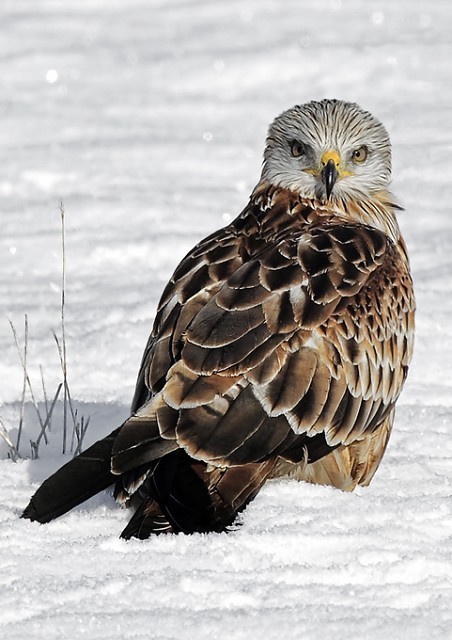 However, severe gales in May did take a heavy toll on some local populations, particularly those in Central Scotland, with nests and eggs being blown from trees or nesting trees blown over. A total of 76 young fledged in Central Scotland compared to 93 the previous year. Other populations were much less severely affected by the weather. Duncan Orr-Ewing, RSPB Scotland Head of Species and Land Management, said: "There was real concern for Red Kite breeding this year after May's severe storms. The wind came at a critical time of the breeding cycle when the eggs were on the point of hatching or there were small young in the nests. Fortunately, it appears that the majority of Scotland's Red Kites escaped the worst of the extreme weather, and the overall population continues to grow."

Andrew Stevenson, SNH's ornithological adviser for the Red Kite project, said: "It is great news that Red Kite numbers have increased again in Scotland this year with the population showing resilience to the exceptionally poor spring weather. It's also very encouraging that the central Scotland and Aberdeenshire populations of these spectacular birds are starting to link up."

Harsh weather, this time prolonged snow and ice during the winter months, may also have affected the northeast England population of Red Kites, as the North East Red Kite Breeding Report for 2011 explains. The result was a 'standstill year', with no increase in breeding pairs or fledged young, and successful nesting once again confined to the core area around the Derwent Valley and the Causey and Beamish district (Co Durham). There was no indication of a spread into surrounding districts and, for the first time since breeding recommenced after a gap of 170 years, no evidence of nesting within Northumberland — although birds were seen regularly in some localities, particularly along the Tyne Valley. However, the encouraging news was that three pairs of Kites succeeded in fledging broods of three young, compared with only one set of triplets in 2010. 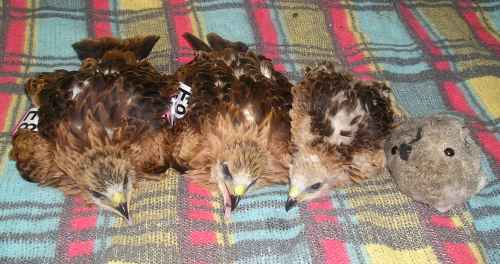 A brood of three chicks — and their toy seal head (FoRK).

2011 was the second year in which responsibility for monitoring was undertaken by the Friends of Red Kites (FoRK), the organisation made up of former volunteers with the Northern Kites project that released 93 kites from the Chilterns over a three-year period. Ringing, wing-tagging, completing BTO Nest Record Cards and reporting to the Rare Birds Breeding Panel was also undertaken by FoRK.

The 2011 youngsters were fitted with white tags with black lettering on their right wings with the normal Northern project tag of pink on the left wing. Anyone seeing a tagged kite can report it through the FoRK website.