Plans Unveiled to Bring Rare Birds Back To The Region 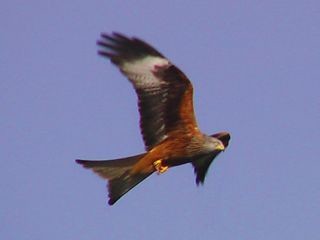 One of the UK's rarest and most stunning birds could return to long-lost haunts in the northeast of England next year, after plans to re-introduce Red Kites to the region were announced today by English Nature and The RSPB on behalf of a partnership that includes Gateshead Council, Northumbrian Water, The National Trust and Forest Enterprise.

Once common throughout the country, the Red Kite is now one of the UK's rarest birds of prey. The kite's distinctive profile of raked back wings and forked tail was once a familiar sight in the skies over northern England. However, human persecution took its toll on the kites and the birds became extinct in the region more than 130 years ago.

Until recently the only Red Kites left in Britain were restricted to a small area of central Wales. However, during the past fifteen years young Red Kites have been translocated from healthy breeding populations and released into the wild in suitable areas of England and Scotland. This work, overseen jointly by English Nature, Scottish Natural Heritage and the RSPB, has seen breeding populations successfully established in several areas of the UK from the southeast of England to the north of Scotland.

New proposals have now been put forward by English Nature and the RSPB to extend this work into northeast England. The proposal has already attracted the support of a number of key organisations that share the vision of establishing Red Kites in the North East. Northumbrian Water, Gateshead Council, The National Trust and Forest Enterprise are all supporting the project. Gateshead Council have pledged £50,000 per year to the project and Northumbrian Water £15,000 for each of the first two years.

If additional support and funding can be found then the first group of up to 30 Red Kites could be soaring in northeast skies as early as next summer.

The proposals put forward by the North East Red Kite Project include:

The proposal is for the project to run for five years, with releases of kites taking place each year. If all goes to plan, then the conservation organisations hope that Red Kites will once again become a regular sight in northeast skies and a self-sustaining breeding population will be established in the region.

John Barrett of English Nature, said: "We are absolutely delighted to be taking the first steps towards restoring this magnificent bird to its rightful place in the northeast countryside. The support of such a diverse range of partners is a fantastic boost to our plans and we look forward to working with them and the people of the northeast to ensure the success of this project".

Patrick Thompson of the RSPB added: "Red Kites are beautiful and majestic birds and popular with the public. Evidence from other re-introduction areas suggests that local communities, tourism and the regional economy have all benefited from the return of the Red Kite."

Councillor Michael McNestry, Gateshead Council Cabinet member with responsibility for the Local Environment, said: "We are very happy to support this project, which builds on the considerable work we are already doing to enhance wildlife in Gateshead.

"We have seen what Ospreys have done to boost the Lake District's economy and I'm confident that this project can do something similar for Gateshead. I hope that, in the near future, the sight of Red Kites soaring over the River Derwent will become a familiar one to visitors and local people."

Dr Chris Spray, Northumbrian Water's Environment Director said: "Providing opportunities for people to appreciate, watch and learn from wildlife is important to our company and Northumbrian Water is consequently proud to be a partner in the re-introduction of kites to the North East.

"Much wildlife is often to be found in the rural areas and the major challenge is getting the environmental message into urban areas. We believe that kites released close to Tyneside will carry that message in flight to those who live in the towns and cities."

Graham Gill, Forest Enterprise, Forest Manager said: "We hope our woods in the Derwent Valley will become nest sites for the Red Kites in future. In Chopwell Wood, we already have a very active environmental education programme run by our Ranger along with the local community group, the Friends of Chopwell Wood, and we are excited about the possibility of adding Red Kite as a wildlife viewing opportunity."

Evidence for the former presence of Red Kites in the region includes historical records of local names - 'swallow-tailed falcon' - and 'Glead' or 'Glede' (from the Anglo-Saxon word for 'to glide'). Several northeast placenames also hint at the past presence of the birds including Gleed Hill, Gled Law and Gledscleugh.

The Red Kite re-introduction project was initiated in 1989 by the former Nature Conservancy Council and the RSPB when young Red Kites were released at sites in southern England and northern Scotland. From 1989 to 1994 a total of 93 kites were released at each of the two sites, those released in England coming from Spain and those in Scotland from Sweden. New release schemes began in the English Midlands in 1995, in central Scotland in 1996, West Yorkshire in 1999 and southwest Scotland in 2001.
Written by: David Hirst, RSPB
Login to leave a comment
Return to List