The latest UK breeding figures for the Stone Curlew – one of our most threatened birds - show that it has reached a conservation milestone, seven years ahead of target. However, the RSPB and Natural England today [Thursday 27th November] are warning that the recovery may be reversed if measures to create suitable habitat for this bird are not implemented quickly.


Stone Curlew from BirdGuides.com on Vimeo.

This summer’s population count revealed that 351 pairs nested, which means that the Stone Curlew has met its 2015 Biodiversity Action Plan target of 350 pairs, well ahead of time. It is one of the few species of bird achieving this level of success. This crow-sized wading bird has its strongholds in the Brecklands of East Anglia, and Wessex, centred on Salisbury Plain.

But the survey also revealed a dramatic drop in the number of young birds being fledged. This year, on average every 100 pairs between them only fledged 49 chicks, making this the lowest level of success since at least 1988. The UK’s Stone Curlew population this year only fledged 172 young, compared to 238 in 2007 - an average year. The Stone Curlew likes open ground, and it is believed that the combination of a wet spring and summer, prompting grass growth and making it hard for the birds to find insects on bare ground, and the scrapping of set-aside, where farmland is left un-cropped, had a significant impact on this year’s breeding success.

The RSPB’s Robin Wynde has been monitoring the fortunes UK’s Stone Curlew population for over a decade. Commenting on this year’s figures, he said: “Whilst it is great to see the population going up again we are concerned at how few Stone Curlew chicks were produced this year. We fear that numbers could drop over the next couple of years because there were too few young produced to replace natural mortality. Stone Curlews used to nest on fallow land or on bare patches within crops. This year there was very little open ground, particularly in the latter part of the summer, and it was a short breeding season as a result.” 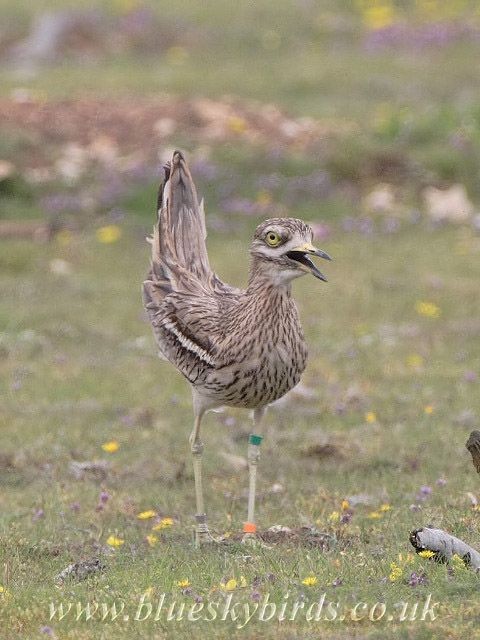 Pete Brotherton, head of biodiversity for Natural England, said: “The recovery of the Stone Curlew is fantastic news and shows the difference farmers can make when they manage their land with wildlife in mind. Together we are bringing this bird back from the brink of extinction and we will continue working with farmers and the RSPB to ensure it thrives in the future. As our countryside faces increasing pressure for food and energy production, we must ensure that our wildlife doesn’t lose out. A healthy natural environment is good for us all.”

Since 1990, the UK’s Stone Curlew population has risen, due to wildlife-friendly farming schemes - like Environmental Stewardship - and set-aside. However, this success could be partially undermined by the scrapping of set-aside earlier this year as it provided the ideal conditions for these birds to nest and feed.

Gareth Morgan is the RSPB’s head of agricultural policy. He said: “When the European Commission axed set-aside, Hilary Benn did a fantastic job in securing compensatory measures. The challenge now is to seize these opportunities for the benefit of the stone-curlew and other threatened farmland species.”