At least 42,500 Pink-footed Geese were counted coming out of roosts off Caerlaverock on Sunday morning, shattering the previous count record for the area.

It is thought that the unprecedented numbers are due to birds moving away from roosts in the northwest of Scotland as the snow and cold weather continues. WWT's Dr Larry Griffin was at Caerlaverock on the Solway coast at dawn on Sunday morning, and commented: "The sky was full of skeins of geese for a full hour, coming off their roosts on the mudflats and flying up the River Nith. Having called some of the other goose counters who were out, we can safely say there were at least 42,500. The highest count in the last 20 years was 30,000 and numbers of between one and five thousand are more usual." 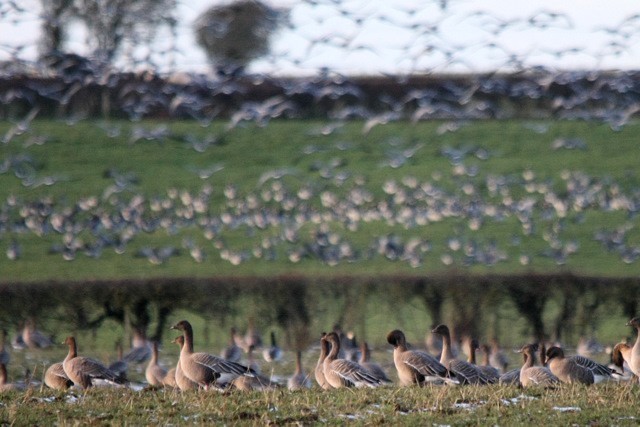 "This is only one section and I'm guessing numbers of Pink-feet across the estuary could be over 50,000. It's likely they've come west from the Moray Firth, Vane Farm and Slamannan Plateau as the snow has covered over the fields, making it impossible for them to feed."

Dr Griffin and his colleagues were out counting the geese as part of regular waterbird monitoring. Monitoring wildlife is crucial in spotting conservation problems and channelling money and effort to where it is most needed.