Conservationists are investigating what has caused the largest roost of corn buntings in living memory to settle in a farmer’s field in Bedfordshire. The farm in the village of Stotfold in Bedfordshire currently has 700 Corn Buntings — thought to be around 4% of the entire UK population — occupying one field. RSPB experts are working with farmer Steve Bumstead to find out what has attracted so many of the songbirds to the farm. 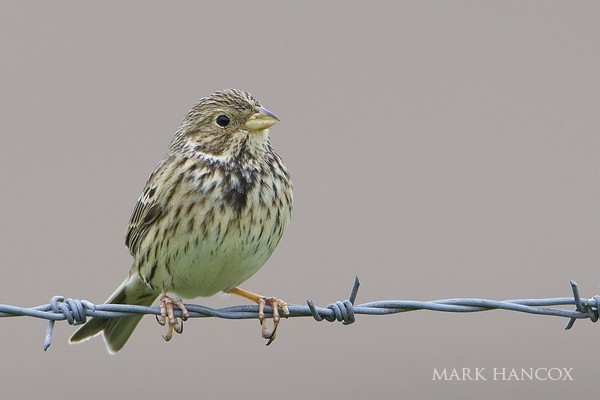 Steve has always farmed with wildlife in mind and regularly leaves field margins and winter stubble on his land to provide habitats and food for birds as well as putting up owl boxes. He also spreads the sweepings and unsaleable leftovers from his barley crop on his fields in winter and believes this may have helped attract the birds.

“I’m astonished at the excitement it has caused,” said Steve. “But I’ve always done things for wildlife on the farm like putting barley sweepings out in the fields, so it’s business as usual for me. It was a member of the public walking in some nearby woods who first saw the Corn Buntings and they told the RSPB who got in touch with me. I’m only too happy to help, I believe farmers are the custodians of the countryside and if there’s anything we can do to benefit wildlife then we should do it.”

RSPB farming advisor Richard Winspear said: “I’ve never seen anything like this, it’s quite extraordinary. Corn Buntings regularly gather in this area at this time of year but this breaks all records, nobody at the RSPB has ever recorded a flock of 700 before. Birds will flock together like this when food is scarce as there is a strength in numbers. Being in a group means the birds can forage more efficiently as well as being safer from attack by predators. What we now need to do is investigate exactly why these birds have all arrived in this field during this exceptionally cold winter. Hopefully this will help us learn some lessons that we can use in future when we are advising farmers on how they can help wildlife on their land.”

Corn Buntings are of high conservation concern and are currently listed on the official list of endangered birds in the UK. Their populations have declined by nearly 90% in the UK over the past 40 years and the RSPB works with farmers across the UK to try and halt the decline by putting environmental measures in place on their land.

As Corn Buntings feed on grain farmers can help provide a food source for them in winter by leaving over-winter stubble for them to forage in rather than ploughing their fields before Christmas. They can also sow winter seed mixes. Farmers will receive payments for both these measures through the Entry Level Stewardship scheme.

RSPB conservation researcher Rosemary Setchfield is currently working with farmers in the area to help corn buntings by trialling plots of nesting habitat. As birds in this huge flock are likely to breed on her study sites over the next two years, she is now planning to catch some of the Stotfold birds, fit colour rings and release them. This will allow the movements and nesting success of individuals to be followed. It is hoped her research will give the RSPB a greater understanding of Corn Bunting behaviour and identify measures that will help ensure the species’ recovery.