A dead Raven found on Ruabon Moor, near World’s End, North Wales, has been confirmed as deliberately poisoned, triggering a police investigation. The bird was found dead on 28 August 2018 by a wildlife photographer.

Thinking it may have been shot, the unnamed photographer contacted the RSPB’s Investigations Unit. Following liaison with the North Wales Police, Welsh Government arranged for toxicology tests on the bird. This revealed that the Raven had been deliberately poisoned with the highly toxic insecticide bendiocarb, which had likely been applied to a bait. Police enquires in the area have thus far failed to identify anyone responsible. 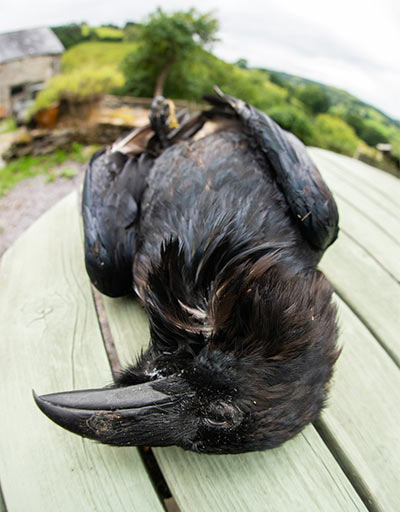 The Raven was found dead at the scene (RSPB).

The photographer commented: “I was coming home from Wrexham when I noticed the bird on the ground, away from the road in a little clearing of grass. It was upside down, its eyes sunken, and its feet in the air. It didn’t look like it had been dead for long.”

Ruabon Moor holds a significant proportion of the Welsh Black Grouse population and is an area managed for Red Grouse shooting. In 2018, two Hen Harriers went off the radar in this general area. The birds had been fitted with satellite-tracking devices as part of the EU-funded Hen Harrier LIFE project.

Jenny Shelton, from RSPB Investigations, said: “It would seem that Ravens and birds of prey are not welcome in this area, and naturally people will be asking why. There is a history throughout the UK of birds of prey and Ravens being targeted on areas managed for intensive grouse shooting, due to the perceived threat these natural predators pose to the grouse. However, the law is plain: killing birds of prey and Ravens is illegal.

“On top of this, placing poison in a public area is hugely irresponsible. Many people will be bringing their families to places like this as the weather warms up. To think that a child or a family pet could have found this bird is outrageous. These crimes must stop before someone is seriously harmed.”

North Wales Police are now appealing for information and Rob Taylor, North Wales Police Rural Crime Team manager, said: “The deliberate killing of a bird by poisoning is a serious risk to humans and other animals such as certain birds of prey who frequent the area. We are continuing our investigation and we ask members of the public who have information to contact us or ring Crimestoppers anonymously.”