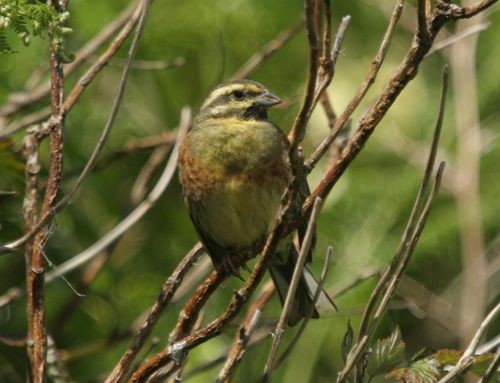 A rare and threatened bird that currently only breeds in one county is spreading its wings in a new location thanks to a pioneering project aimed at safeguarding the future of the species in Britain.

In the first reintroduction of its kind in Europe, more than 70 Cirl Buntings have been released in south Cornwall as part of an innovative project by the RSPB, Paignton Zoo, Natural England and the National Trust.

Although previous projects have reintroduced birds of prey such as Red Kites and White-tailed Eagles and returned Corncrakes to The Wash, this is the first European reintroduction of a small farmland bird.

The RSPB's director of conservation, Mark Avery said: "We're delighted that this ambitious collaborative project has got off to such a good start. It's fingers crossed now that these birds survive the winter and settle down well in their new home."

He added: "This project really is about putting wildlife back in the landscape and redressing some of the losses that have happened in our lifetimes. If we succeed - and things are looking good - then it sends a very positive message that farmers and conservationists can create a countryside which is richer in wildlife."

In order to carry out the reintroduction, Cirl Bunting chicks were collected under licence from the former English Nature from a number of sites in south Devon during the summer and then hand-reared by aviculturists from Paignton Zoo before being released back into the wild.

Paignton Zoo's curator of birds, Colin Bath said: "We're really proud of the way our two aviculturists have excelled themselves during this first summer of the project. It's great that we found not just one but two keepers who possess boundless patience and all important nimble fingers, essential for rearing tiny chicks."

The Cirl Bunting was once a common bird in Britain, found all along the south coast of England and even into north Wales, but changes in farming practices and loss of suitable habitat to built development led to its decline and saw its range restricted to a small area of south Devon.

In 1989 only 118 pairs of the bird remained, but since 1993 the RSPB has worked with farmers, landowners and partner organisations to ensure Cirl Buntings have appropriate places to live, feed and breed. As a result, the population has increased to more than 700 pairs.

RSPB conservation officer, Chris Townend has been managing the reintroduction project. He said: "'Cirl Buntings are stunning birds to look at but are rather lazy, never moving more than about a mile from their birthplace."

"Their numbers may have increased but until now they were concentrated in one small area, so if anything happened to that population it would mean the end of Cirl Buntings in Britain. This is why they need a helping hand to secure their future here."

The re-establishment of Cirl Buntings in other parts of southern England is the target of a Government-backed UK Biodiversity Action Plan for the species, but the birds will also need farmers and landowners on their side if the reintroduction is to be a real success. The birds need weedy stubble fields where they can feed on seeds and spilt grain during the winter and, in summer, insect-rich land with hedges to nest in.

Farmers in Cornwall are already lending the birds their support, as the hand-reared Cirl Buntings have been released on farmland in the south of the county. The actual location remains a secret in order to minimise disturbance to the birds, which could effect whether or not the project succeeds, in terms of whether birds released this year breed next spring. A trial release in Devon proved successful, with Cirl Buntings surviving the winter and joining the wild population.

Chris added: "All the birds from this first year of the project have been colour-ringed, so that individuals can be identified and monitored to see how well they are doing. In the meantime, we're hoping more local landowners will sign up for Environmental Stewardship to give the reintroduced Cirl Buntings the best chance."

Cornwall was chosen for the release because it met the criteria set during a study of potential reintroduction areas. It used to have Cirl Buntings until a few decades ago, has suitable habitat thanks to National Trust tenants and others and a temperate climate (Cirl Buntings can be very vulnerable to prolonged cold weather and snowfall). It was also considered more likely to be able to support the greatest number of pairs compared to other sites.

The project has been partly funded by the Countdown 2010 Biodiversity Action Fund, a grant scheme launched by English Nature late last year. It supports projects carried out by voluntary organisations which can achieve Government backed targets and objectives aimed at maintaining biodiversity in England.

The Cirl Bunting reintroduction project will run for the next three years, to enable the release of enough birds to create a sustainable population.

The need to help Cirl Buntings to expand their range is recognised in the Government's Biodiversity Action Plan for the species. The RSPB and Natural England believe that the Action Plan’s long-term objective, to see Cirl Buntings re-established in other parts of southern England, is only likely to be achieved in the near future through reintroduction. This is because Cirl Buntings are strict residents and most birds spend all their lives within about 1-2 kilometres of their birthplace. Natural recolonisation is unlikely and if it were to occur, it would be slow and restricted by large areas of unsuitable habitat.

The Cirl Bunting reintroduction project is a partnership between the RSPB, Natural England (formerly English Nature), the National Trust and Paignton Zoo. Paignton Zoo has invaluable experience in hand-rearing birds. Two aviculturists are employed by the Zoo to care for the birds whilst they are in captivity. The National Trust have allowed access to many of the sites that birds are taken from and have provided a suitable location for the birds to be hand-reared. Both the RSPB and Natural England have invaluable knowledge and expertise on Cirl Bunting requirements and previous reintroduction projects.
Written by: RSPB
Login to leave a comment
Return to List