Rare Birds, Where and When: An analysis of status and distribution in Britain and Ireland. Volume 1: sandgrouse to New World orioles by Russell Slack 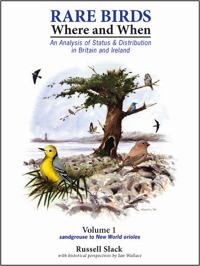 The seeds for Rare Birds, Where and When were sown unwittingly many years ago. As a youngster desperate to gather birdwatching acumen I was fortunate enough to chance upon a copy of Discover Birds by Ian Wallace. The fusion of images and words in Ian's accounts of rare bird days were motivational. Like many of my generation I was hooked. Rare Birds represents the culmination of a long-standing interest in rarities and vagrancy patterns.

Primarily a self-finder, I derive my greatest pleasure from vagrants by stumbling across my own sightings. Countless hours spent wandering around prime rarity habitat on my local patches in Yorkshire have left me with much time to ponder why rare birds seem to appear in some places but not others. Especially so during those seemingly frequent days when sites elsewhere seem to be straining under a deluge of scarcities and rares, yet the bushes in front of me are depressingly empty.

Geographically positioned on the edge of Western Europe, we in Britain and Ireland are well placed to receive vagrant birds. Our location together with our notoriously mercurial weather conditions conspire to produce perhaps the richest vagrant avifauna anywhere on Earth. Around half of the national list is comprised of such species, a tally bolstered by vagrants originating from every possible direction: species from the high Arctic, Nearctic, North Africa, Southwest and Central Asia, Siberia and wanderers from the world's oceans.

Many serious ornithologists probably have little interest in rarities which, after all, represent the glamour end of the ornithological spectrum. Mad dashes by car and charter flights to offshore islands are all very non-environmentally friendly in the noughties.

Rarities as barometers of change

Not only are rarities hugely entertaining and popular but also for a number of species they can be indicators of changes in population, range and migratory strategies. The huge increase in the number of Siberian vagrants reaching our shores nowadays can not be attributed solely to increased observer effort or changes in weather as evidenced by the parallel upsurge in records from constant effort sites such as the Bird Observatories. Likewise the increased prevalence of wintering by Siberian vagrants in Western Europe suggests changes in migratory strategies amongst a number of species. Bird populations and movements are dynamic and changes in vagrancy status for some species reflect changes in population size, distribution or the adoption of new migration strategies. As an insight into how analysis of rarity records can be useful, let's consider two species whose status is going in opposite directions for different reasons.

Blyth's Reed Warbler, Flamborough Head, East Yorkshire Once identifiable only with the help of a mist-net, this species epitomises the rapid advances in field identification, such that in-the-field claims are made without too much fuss nowadays. Whilst the increase in numbers partly reflects observer ability, it is actually fuelled by the westwards range extension that has recently taken it into Norway. A mixed pairing with Marsh Warbler has occurred in The Netherlands. Could this species breed in Britain at some point? (Photo: Steve Morgan)

As a relatively inexperienced youngster in May 1984 I travelled to Spurn, mainly for a Thrush Nightingale that had been reported there but also for the good numbers of scarce migrants present on site and the likelihood of more turning up. There were no national news services back then and on arrival we were greeted with the news that a mythical Blyth's Reed Warbler had been trapped. To put the record into context, it was only the second since 1928 and the first to enjoy mass appeal. The sense of disbelief at the appearance of such a mega rarity was widespread through the crowd that day. Little did those of us under the leaden sky realise, but we were witnessing the vanguard of an imminent change in status for this subtle Acro.

Since 1984 this species has failed to make the national archive in only six years and the century of sightings is about to be surpassed. No fewer then 15 were accepted for 2007 alone and a staggering 53 were documented between 2000 and 2007, including one of the most urban rarity finds ever at Canary Wharf in London.

Blyth's Reed Warbler epitomises not only the huge advances that have been made in field identification for many tricky species since the mid–1980s but also the fact that changes in distribution can sometimes occur very rapidly. The increase in spring records in recent years reflects an increasing number of overshoots from the expansion of the breeding range north and west into the Baltic States and Finland. Breeding was first proven in Estonia in 1938, Latvia in 1944 and Finland in 1947. Nesting first took place in Sweden in the 1970s. In 2007 a record 15 singing males were present in Norway. Autumn birds tend to occur later than the main departure period for the western part of the breeding range, so it seems likely that many records in that season are from the increasingly bolstered populations farther east.

Last of the rice birds?

At the other end of the spectrum, Yellow-breasted Bunting is in freefall. Increased observer numbers, mobility and coverage accumulated a national total of 55 birds during the 1970s and a further 62 in the 1980s. Despite its frequency, this attractive bunting was difficult to come by away from Shetland. This species stood alongside Pechora Pipit, Pallas's Grasshopper and Lanceolated Warbler on the podium of Fair Isle specialities. Average annual numbers on the island increased from 1.0 per annum between 1960 and 1969 to 2.7 between 1970 and 1979 and a heady 3.8 between 1980 and 1989. During these years an appropriately timed visit would virtually guarantee success. However, the scant cover of the island and its constant coverage also provided an early pointer to the fact that Yellow-breasted Bunting was in trouble. 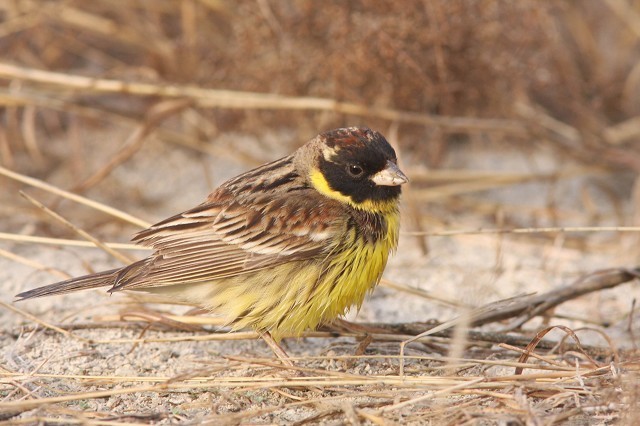 Yellow-breasted Bunting, China Records of spring or summer males have always been at a premium. Once one of the more frequent and expected rarities of the autumn and one of the Fair Isle specialties, numbers in Britain have plummeted. A number of factors appear to have contributed to this decline, notably excessive trapping and range contraction. (Photo: Steve Wilce)

Formerly one of the most abundant breeding passerines across vast swathes of Siberia, climatic amelioration from 1850 onwards had pushed the Yellow-breasted Bunting population westwards as far as Finland, where up to 200 pairs were present in the late 1980s. Numbers have declined rapidly since then to the point where there have been only two birds recorded in Finland since 2004. The westward range extension was clearly associated with the upsurge in records here.

Recently the species was been upgraded to Vulnerable by BirdLife International, as evidence suggests that it has undergone a very rapid population decline. This is thought to result from excessive trapping at migration and, in particular, wintering sites. Roosting flocks in reed beds are caught in mist-nets to be cooked and sold as "sparrows" or "rice-birds". Formerly restricted to a small area of southern China, this practice is now more widespread. It is estimated that over a million individuals are killed annually to be sold as snacks or the males stuffed and sold as mascots because their presence in Chinese homes is thought to confer happiness.

Additional pressures such as agricultural intensification, loss of winter stubble and loss of reedbeds for roosting sites have all played their part in ensuring that a species that we once took for granted as a frequent rarity is now exceptionally rare. In 1993 Fair Isle Observatory logged its first blank return since 1970. Numbers for the 1990s as a whole were down to 2.1 per annum and since 1999 there have been just two records on this well-recorded island.

So, whilst rarities do indeed give many of us a buzz at having encountered a rare and remarkable species many miles off course, they can also add a surprising insight into the varying fortunes of species in our islands and beyond. Rare Birds, Where and When is packed with insights into the ups and downs of the birds we all long to see or find, or hear about on Bird News Extra. As well as providing detailed information on the status, distribution and vagrancy patterns of rare species here it also teases out trends in occurrences and links these to distributional or population changes and migration routes.

More details about Rare Birds, Where and When can be found at: www.rarebirdbooks.co.uk. You can order this book from BirdGuides now: please click here.

Sample pages can be found for the following species: