Last year, more than 23,000 people enjoyed a 'Date with Nature' in the New Forest — visiting Lyndhurst's Reptile Centre to view live footage taken from the nests of breeding birds of prey. Many more followed the story of the magnificent aerial predators and their chicks via an internet video link. However, preparations for such a popular attraction take much time and effort and, with this year's 'Date with Nature' due to start on 1st April, the Forestry Commission has already been hard at work identifying a Goshawk nest for filming and assessing the impact of this year's particularly bleak winter. 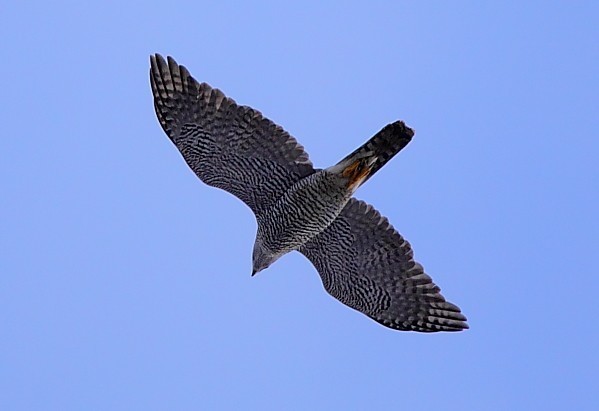 The Forestry Commission's Head Keeper, Andy Page, explained: "A severe winter can have a detrimental effect on Goshawk numbers. The birds hunt mainly avian prey and if, for example, bad weather affects quantities of acorn and beech mast in the forest, this in turn will also affect the number of pigeons they can hunt. Also, a cold winter may result in squirrels 'hibernating' for longer periods of time — again reducing the Goshawks' potential food source. This said, we have been steadily building the numbers of Goshawks in the New Forest from just one pair in 2001 to about 15 pairs now calling the New Forest their home."

Goshawks are early nesters which means Forestry Commission staff have been out in some very cold weather recently to witness the large birds 'displaying'. From vantage points on hillsides, Andy and his team viewed the birds flying over an area of woodland to attract females and deter other males from their 'patch'. From here, the team focused in on which point in the forest the Goshawk is coming and going from and then relied on their knowledge of the New Forest to pin-point that spot.

Andy continued: "The difficulty we have is that Goshawks will often have two or three nests in an area and we have to determine which one will become this season's preferred nest for breeding. The male Goshawk may refurbish one nest with sticks but then their female mate may opt for a less obvious, more sparse nest at the last minute — the avian equivalent of the saying, 'It's a female's prerogative to change her mind'! There are also other factors for us to consider, such as the distance of a potential nest from the Reptile Centre and also the height of the tree it's in — particularly as I'm not the one climbing it to secure the filming equipment!"

Each year, the Forestry Commission team rings the Goshawk chicks. Indeed, the team are optimistic that this year the chosen adult pair may well be birds ringed several years earlier as chicks themselves.

A Date with Nature is a joint venture between The RSPB, the Forestry Commission, New Forest National Park Authority and Carnyx Wild. It will run daily from 1st April to 31st August (10:00 to 16:30) and will follow every move of some of Britain's most secretive birds of prey — from eggs hatching, to prey arriving and chicks finally leaving the nest. Entry to the New Forest Reptile Centre will be free (although donations for parking will be welcome) to all visitors, who will be able to watch live pictures (and recorded highlights) from the Goshawk's nests on a large-screen TV.