A parasitical disease normally found in domestic poultry is rapidly spreading to our native Red and Black Grouse populations.

Cryptosporidia is a respiratory disease of farmed chickens and turkeys caused by a parasitic protozoan called Cryptosporidium baileyi, and was first discovered in 'wild' gamebirds in 2010, in an infected Red Grouse on the North Pennine Moors. Birds with symptoms had already been reported from the same area the previous year. 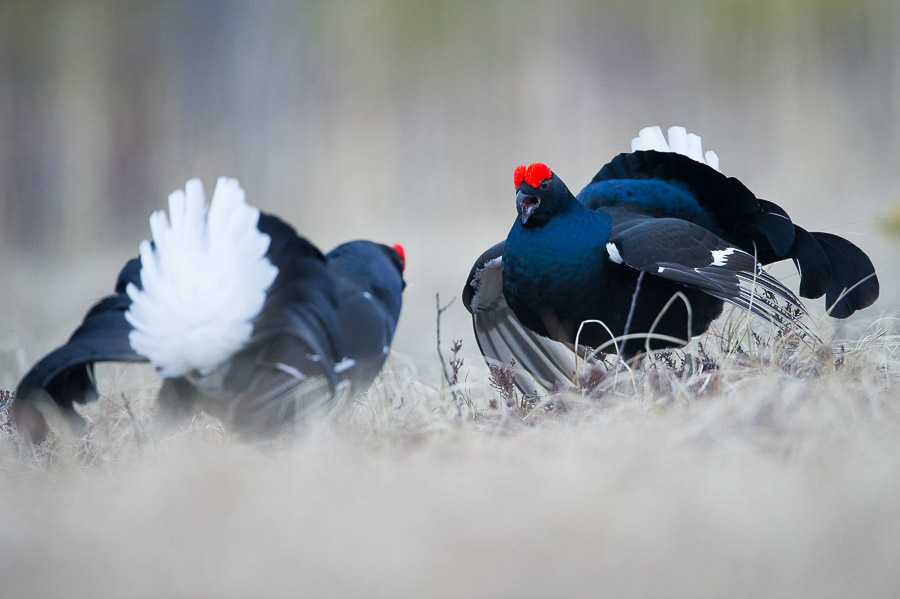 Black Grouse are at risk from Cryptosporidia (Photo: Terje Kolaas)

Since then several other moors had reported the disease, prompting scientists from the Game and Wildfowl Conservation Trust (GWCT) to circulate a questionnaire, asking shooting estate whether any of their shot birds had exhibited the symptoms of the disease: swollen eyelids and a mucus discharge from the nostrils and eyes. Their results have just been published in the journal Veterinary Record.

About 68 per cent of the 150 landowners questioned responded, reporting that 48 per cent of moors had found birds with these symptoms. Clearly the disease is spreading rapidly, and appears to be currently present in about 3.7 per cent of Red Grouse examined.

The GWCT themselves admit that the practice of driving the grouse during shoots has probably helped spread the disease to new areas, as well as the birds mixing in the unnaturally high densities encouraged on shooting estates for commercial reasons. The first record from Scotland, in the Lammermuirs in 2013, probably indicates that it is also being promulgated by the transport of birds to different areas, much in the way that 'bird flu' was brought to Britain via domestic poultry in shipments to Bernard Matthews' Norfolk factories from eastern Europe.

The paper also suggests that Black Grouse may be becoming infected, undoing the hard work of conservationists who have managed to double the numbers of this scarce species in recent years. This new threat to our native gamebirds can't help but fuel thoughts that this and other diseases of captive birds are what is driving the decline in Grey Partridge, too, along with increased competition with the millions of Red-legged Partridges and Pheasants artificially released every year (many of which are known to harbour this disease and others).

Few appear to have the will to research such areas, perhaps due to vested interests, so we should be grateful that the GWCT has made their results public.