A large number of dead Himalayan Vultures were discovered by locals at Milanpur in Assam, India, in March, and reported to the authorities.

Staff from the Assam Forest Department and the Bombay Natural History Society came immediately, along with veterinarians who managed to successfully treat 10 vultures and a Steppe Eagle. 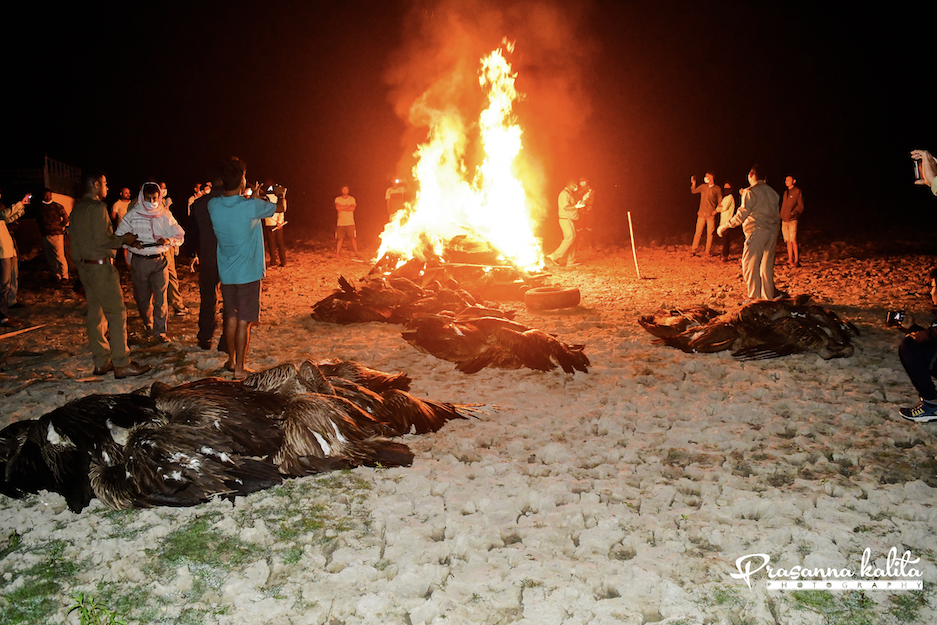 Vets saved 10 vultures, but the other victims had to be burned to stop the poison moving through the food chain (Prasanna Kalita via Vulture Conservation Foundation)

However, their main job was to burn the carcasses of 98 Himalayan Vultures and another Steppe Eagle to prevent the poison spreading through the food chain. The next day, another two dead vultures were found, bringing the vulture death toll to 100.

The carcasses of a goat and a dog were telling pieces of evidence at the scene. Farmers in the area often lose goats and calves to dogs, so it is likely the dead goat was laced in poison to kill feral dogs. Of course, poison is indiscriminate and vultures soon home in on dead animals, so the gathering scavengers were killed too.

It is suspected that carbofuran, a toxic pesticide, was used on the goat carcass, and a man who recently lost to goats to a dog attack was detained.

The event comes under the backdrop of a huge fall in India's vulture population in recent years, with the veterinary drug diclofenac leading to a 95% decline in three Gyps vulture species in the 1990s. Diclofenac is now banned and there are signs of population recovery but the drug has still been widely used in recent years.

As a state, Assam is familiar with mass vulture mortality events. Slender-billed Vultures and White-rumped Vultures made up 36 dead birds in Tinsukia in January 2021, and 20 more died in the area a few weeks later, with all these birds thought to have been poisoned.