Hailed as an icon of wild Scotland, the Golden Eagle has been used on company logos, place names and ancient burial sites, and was also recently voted the nation's favourite animal. Now, a new campaign is aiming to see it named as the country's national bird. Fronted by wildlife cameraman Gordon Buchanan, RSPB Scotland has submitted a petition urging ministers to formally designate the species as a national symbol, placing it alongside the lion rampant, saltire and Scottish thistle as emblems of the country.

There are currently just 431 pairs of Golden Eagles in the entirety of Scotland. Owing to centuries of persecution, this most charismatic of birds has been almost entirely confined to the more remote areas of the country, such as the mountains and glens of the west coast and on the Western Isles, with numbers held at artificially low levels and many territories vacant. Its restricted range and tendency to favour the more remote and dramatic areas has made it become a coveted sight for any visitor who appreciates Scotland's magnificent wildlife spectacles. By pressing for the adoption of the eagle as Scotland's national bird, RSPB Scotland hopes to help to raise its profile, turn around its fortunes and see it return once again to its former range — thus increasing the chances of a sighting for visitors and local people. 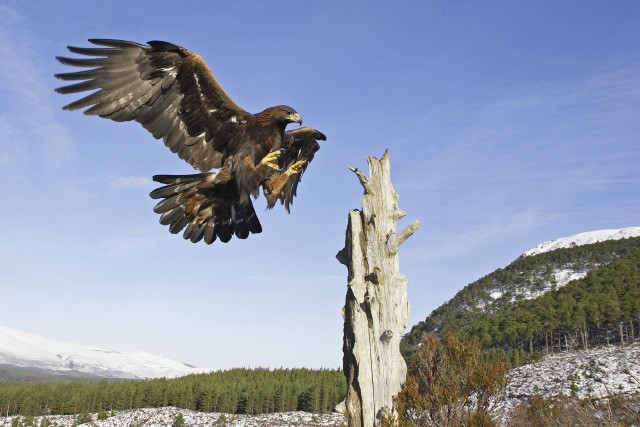 Gordon Buchanan commented: "The thrill of seeing a Golden Eagle soaring over a Scottish hillside is an unbeatable experience. For me they symbolise the wildest parts of Scotland and there is no other contender for Scotland's national bird. Spending my childhood on Mull meant I grew up with eagles. I've been lucky enough to see hundreds since and each one is special. But they could and should be more common. Scots and visitors to Scotland shouldn't hope that an eagle sighting is a once-in-a-lifetime experience; they should expect to see them regularly. That is why I'm backing the RSPB's campaign to make Scotland's national bird the Golden Eagle."

Stuart Housden, Director of RSPB Scotland, said: "The majestic sight of an eagle gliding effortlessly above the treetops, or along a dramatic cliff edge, never fails to impress — so much so that this spectacular species was recently named Scotland's favourite animal following a public vote. It is a stirring symbol of strength and pride, qualities well befitting to a modern Scotland and its people. 2013 is the Year of Natural Scotland — a period where the Scottish Government is celebrating our most impressive natural heritage. What better legacy can we provide for this initiative than to officially designate the eagle as Scotland's national bird and join together for its future conservation? It would formally recognise the place this species has unofficially occupied in our culture for many centuries, and show our commitment and desire to protect and conserve it, and our wider national heritage, for generations to come."

To show support by signing the petition, please visit http://www.scottish.parliament.uk/gettinginvolved/petitions/goldeneagle.