Peregrines are back in town…

Urban Peregrine families are poised to capture the hearts of city dwellers once again this spring, with the discovery of the first city Peregrine egg of 2009 in Birmingham. A nest cam has captured the single egg of a nesting female on Fort Dunlop, a local landmark in Birmingham. A pair of Peregrines has bred at this site since 2002 and it is hoped that they will successfully raise a family again this year. 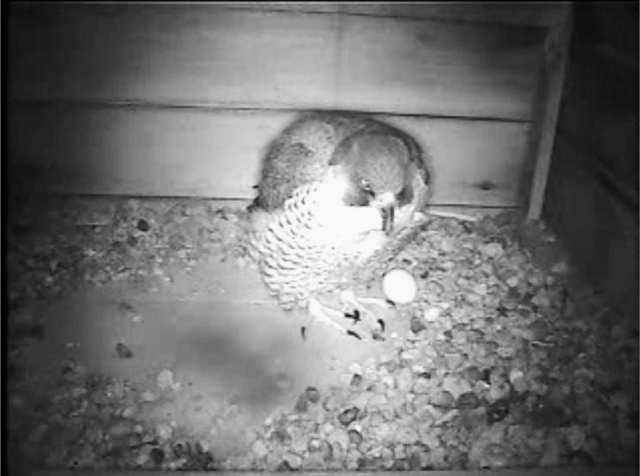 Peregrine Falcons have increasingly been winning the admiration of commuters, shoppers and town workers, inspiring even the most ardent city folk about wildlife as they bring up families on iconic city buildings. One of the fastest creatures on the planet, the Peregrine Falcon is seen in towns and cities across the UK. Nesting sites include the Tate Modern in London, cathedrals in Lincoln and Chichester, Cardiff clock tower and Manchester's Arndale shopping centre.

After a population crash in the 1960s, Peregrine numbers have recovered steadily and recent surveys show that there are now almost 1,500 Peregrines pairs in the UK. They have traditionally been associated with wild crags or lonely sea cliffs but changing landscapes mean they have adapted to living in more unlikely places. All they ask for is a place to breed and a food supply they can catch. To a Peregrine, a tall building like an office block or church offers the same benefits as a cliff face — it is high, safe from danger and the surrounding areas offer ample prey. Surrounding parks, and urban pigeons in particular, offer a ready supply of food. 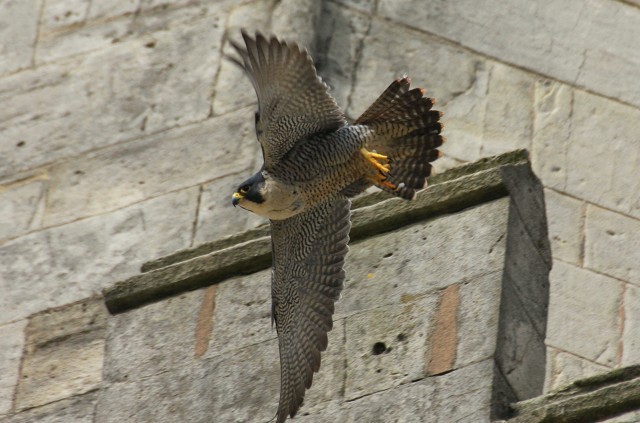 It is hoped that the Birmingham Peregrine egg will be the first of many in cities again this season, giving urbanites the opportunity to see this impressive bird. Thousands of people will be able to keep an eye on the progress of the peregrines at Fort Dunlop while walking to work or doing their shopping in the city centre with a viewing scheme organised by the RSPB. Images will be beamed onto a screen in Victoria Square via the BBC Birmingham website meaning viewers could catch every feed, preen and first flight. Similar viewing schemes will be available all over the country, including Chichester Cathedral, Lincoln Cathedral and Cardiff clock tower.

Louise Pedersen, from the RSPB's West Midlands office, says: "We were all waiting with bated breath to see if our city Peregrines would breed again this year and were so relieved and excited to see the egg when we checked the nest cam footage. We hoped they would be successful again but you just never know, and to think it is the first urban Peregrine egg that has been recorded this year makes it extra special. People never fail to be wowed by the news that one of the fastest and most powerful hunters on the planet lives just above their heads in the city. To get views of them so close up via the camera really brings it all to life and gets even the most resolute urbanites excited about wildlife. It's incredible what shares our cities! Now we just need to keep our fingers crossed that the egg hatches successfully and we can't wait to see a young Peregrine hunting in our skies."

As part of the nationwide 'Date With Nature' scheme, the RSPB will be showing people incredible wildlife spectacles in a range of places. As well as Peregrines in cities, people will be able to get close views of nesting Herons in East Anglia, take a seabird cruise in the north of England, see more than a hundred Red Kites feeding in mid Wales and watch a Red Deer herd in Suffolk. Other Dates With Nature include thousands of Starlings roosting on Brighton Pier, Choughs nesting in slate caverns in Wales and White-tailed Eagles soaring across Scotland.

There are more than 50 Dates With Nature for 2009, introducing people to the wildlife they have on their doorstep and giving unrivalled views of natural spectacles. Richard Bashford, RSPB Date With Nature Project Manager, says: "You can make a date with nature anywhere, any time, and the UK has some of the most incredible wildlife in the world. The RSPB scheme shows people some of the best we have to offer, from Peregrines to Puffins. Everyone loves nature and sometimes you don't realise how close you are to it. To see one of the most exciting bird species in the world while pottering along with a coffee or heading out to grab a sandwich often surprises people and we're pleased to be able to wow people on their lunch break!"

The link to the Birmingham Peregrine camera is: http://www.bbc.co.uk/birmingham/content/webcams/peregrine_falcon_live_webcam.shtml.

Full details of all projects can be found on the brand new Date With Nature website www.rspb.org.uk/datewithnature.