With its red-banded and white-spotted black wings, Red Admiral Vanessa atalanta is unmistakable among European butterflies. Every year Red Admirals colonise Central and Northern Europe from the south. Later in the year, the offspring of these spring arrivals travel back southwards. Autumn movements can be spectacular, sometimes involving tens of thousands of butterflies moving through a certain area. For decades its movements have been studied. However, some aspects of Red Admiral migration and the species' year-round dynamics are yet to be resolved.

Making use of the recent rapid expansion of online recording portals, the Insect Migration and Ecology research group at the University of Bern (Switzerland) collates observations collected by citizen scientists from across Europe. Aiming at better resolving movement and occurrence patterns on a continental scale, the Swiss researchers have assembled an enthusiastic network of more than 40 institutions and citizen science data portals, operating in more than 20 countries, that support their research project. The project now unites the amazing effort of thousands of naturalists across Europe, compiling hundreds of thousands of records. This allows for Red Admiral migration to be studied with an unprecedented spatiotemporal resolution. 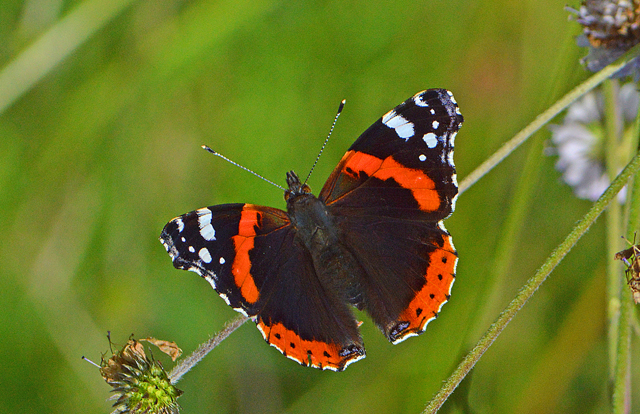 Red Admiral is one of Europe's most familiar butterflies, but mysteries still surround its annual migration (Photo: Philip Ruler)

This wealth of data will allow the scientists not only to better understand occurrence patterns and phenology of Red Admiral, but also to study the influence of a varying environment and a changing climate. It also allows them to explore major migration pathways and their potential impact on the ecosystems they cross. Using Red Admiral as a model species, the researchers also hope to draw more general conclusions that may be applicable to the understanding of other migratory insects, such as economically important crop pests.

Anyone can contribute to this ongoing project, and all sightings are welcomed. The project's website explains how to get involved and offers links to the online data recording websites where sightings can be submitted: insectmigration.wordpress.com/red-admiral-migration