A new pilot project to manage geese populations in Orkney has got off the ground. The initiative will allow local people to control the resident Orkney Greylag Goose population during September before the arrival of the migratory population in October. Geese taken as part of the pilot will be recorded and population levels monitored each summer. This will help ensure that the population is managed at a level that reduces the impact on farming activities while retaining the species' conservation interest. The long-term goal is to have a goose population that is sustainably managed to generate income for local people.

The technique is being trialled in Scotland for the first time under the auspices of Scottish Natural Heritage (SNH) and guided by the National Goose Management Review Group (NGMRG). Plans are also being developed for additional pilots on Coll and Tiree, Islay and the Uists. All have growing populations of Greylag Geese that are causing significant damage to arable or grass crops. In all these areas, culling will be carried out or coordinated by experienced local shooters. In areas where disturbance to migratory geese, including Icelandic Greylags, may be an issue, culling will be carried out before they arrive. 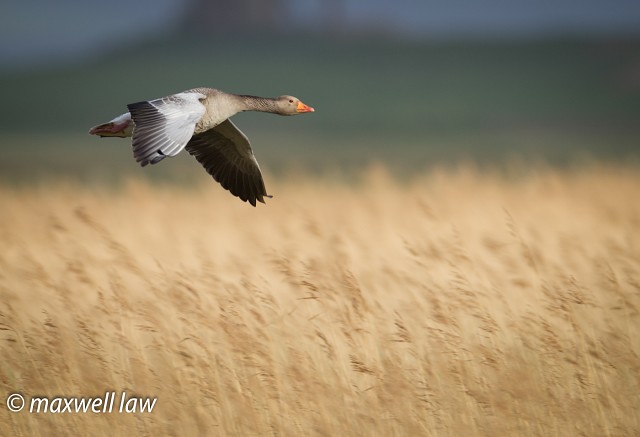 Gail Churchill, SNH's Orkney operations manager, confirmed: "We are responding to the concerns of local farmers and land managers and we are also committed to ensuring that management is controlled so the populations of geese are managed sustainably. The initial target is for 5,500 to be taken as part of this pilot this year, though in subsequent years this number will reduce as the overall population decreases. The number taken in the pilot is very small in comparison with the large number of migratory Greylag and Pink-footed Geese taken each year in Orkney. The work will be undertaken by experienced shooters following established best-practice methods, and overseen by staff within Scottish Agricultural College. This active management work will help us meet our nature conservation obligations by maintaining both a sustainable and stable resident Greylag Goose population over their range. This initiative has the support of the British Association for Shooting and Conservation (BASC) who will be working closely with all those involved in this new form of adaptive management control."

SNH is also committed to working with RSPB Scotland, Wildfowl and Wetlands Trust and the National Farmers Union Scotland (NFUS) to ensure goose conservation and sustainable agricultural land management. Environment Minister Paul Wheelhouse said: "The Scottish Government recognises the major role that farmers have played in the success of goose conservation projects and the significant increase in goose numbers over the past 10 years. However, it is clear that increasing populations of resident geese in particular areas of Scotland pose new challenges for farmers and, given that other methods have only proved partially successful, further action is now deemed essential to bring resident geese numbers down to a sustainable level which may also provide conservation benefits for other species. This is the reason that pilot schemes to manage these populations in Orkney are being supported by SNH and Scottish Government, building upon collaborative work undertaken by the local farmers."

In Orkney the project has been developed and managed in conjunction with the Orkney Greylag Goose Management Group, which includes NFUS, RSPB Scotland, the Scottish Agricultural College (SAC) and local farmers. Current funding supports management and control of resident Greylags on the Uists, Coll and Tiree through shooting and oiling of eggs. The new pilot projects will supplement this work and ensure that information is collected on population levels to ensure sustainable management.