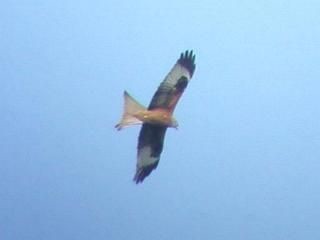 Plans to reintroduce Red Kites to North East England have received a huge boost with the announcement that the Heritage Lottery Fund (HLF) has awarded a grant of more than £300,000 to the North East Red Kite Project.

The North East Red Kite Project is a world first in proposing to re-introduce the rare and spectacular birds of prey into a semi-urban environment in Gateshead's Derwent Valley. Kites were once widespread throughout the north of England, but have been absent from the region for around 150 years. Now they are coming back!

HLF's decision to award £303,500 to the Red Kite Project has been enthusiastically welcomed by the project, which is managed by English Nature and The RSPB working in partnership with Gateshead Council, Northumbrian Water, The National Trust and the Forestry Commission. The project already has the financial backing of Gateshead Council, which has pledged £250,000 over 5 years, and Northumbrian Water who are donating £15,000 for each of the first two years.

With the green light from HLF, Red Kites could be back in the skies over Gateshead as early as next summer. The search will soon be underway to recruit a locally-based team to run the project.

Within a few years, Red Kites should be a regular sight over the suburbs of the city, and they will be a valuable new visitor attraction for the area, helping generate income for the local economy. The kites could eventually be spotted soaring over the MetroCentre and might even adopt The Angel of the North as a perch! Opportunities for local people and visitors to watch the kites at special viewpoints are planned, along with community and education events.

In summer 2004, up to thirty young kites sourced from an established population in southern England will be released into the wild from a secret site in Gateshead's Derwent Valley. Further releases are planned for 2005 and 2006. Kites may start nesting in 2006 and it is hoped that the population will become self-sustaining within a few years.

Richard Bailey, Chair of the Heritage Lottery Fund's Committee for the North East which made the decision to award the grant, said: "People don't necessarily associate wildlife with their heritage, but we consider it to be just as important to the region as our historic buildings, traditions and parks. We were particularly keen to support this pioneering project because, not only will it reintroduce these rare and beautiful birds to the North East, but it will provide plenty of opportunities for local people to get involved."

Welcoming the news on behalf of Northern Kites, RSPB Regional Director Andy Bunten said: "We are thrilled that the Heritage Lottery Fund has chosen to award such a significant sum to this exciting project. Red Kites have been absent from the skies of northern England for far too long and we are all looking forward to helping bring them back home. Re-introducing these magnificent birds into the semi-urban setting of Gateshead's Derwent Valley is another world first for the North East."

Tony Laws, Area Manager for English Nature added: "Without the lottery money it wouldn't have been possible to bring back this stunning bird of prey. We're confident that the Red Kites, with their five-foot wingspan, rust-red plumage and forked tail, will be a major benefit to Gateshead. The return of the Ospreys to the Lake District has been a huge boost to the local economy there, and we're hoping that Northern Kites will achieve similar gains for the North East."

Written by: Media Release: Issued by English Nature, The RSPB, Gateshead Council, Northumbrian Water, The National Trust and the Forestry Commission
Login to leave a comment
Return to List