Nocturnal nature in the balance

With the longest night of the year having recently passed, conservationists have assessed the fortunes of our native nocturnal wildlife and found mixed fortunes. The extra darkness helps some night-time creatures to find food to help them through the cold winter, but many others hibernate throughout the coldest months to survive.

An assessment of the nocturnal species in the ground-breaking State of Nature report, launched earlier this year by Sir David Attenborough and 25 UK wildlife groups, shows that hedgehogs are one of the species hardest hit, with a decline of a third in the past 15 years. Conservationists including the People's Trust for Endangered Species are trying to get to the bottom of the cause — it may be connected to a decline in food available to them on farmland.

Two of the most iconic nocturnal mammals in our countryside, foxes and badgers, remain in healthy numbers widespread across the UK — but the story is more complicated for bats. Bat numbers declined before the 1980s but recently some species have stabilised and a few others have increased as a result of better protection. The Greater Horseshoe and Lesser Horseshoe Bat populations showed annual increases of around 5% last year but there is still a long way to go before these populations recover from the dramatic losses sustained in the 20th century.

Abi McLoughlin, from the Bat Conservation Trust, has warned people not to disturb bats hibernating over the winter. She said: "British bats go into torpor during winter, slowing their metabolisms down, dropping their body temperature and effectively 'sleeping' through the coldest winter months without having to feed. Waking bats drains their precious energy reserves meaning they might not be able to survive until the spring. Rousing like this can use the equivalent amount of energy as spending 30–60 days in torpor. Disturbing bats at this time of year can kill them."

For nocturnal birds the trends vary widely. Barn Owls have fared well, with a 67% increase in their range since the late 1980s, according to the British Trust for Ornithology's recently published Bird Atlas 2007–11. The reasons have not been fully investigated, but it is believed they have benefited from the provision of nestboxes and environmental schemes on farms. 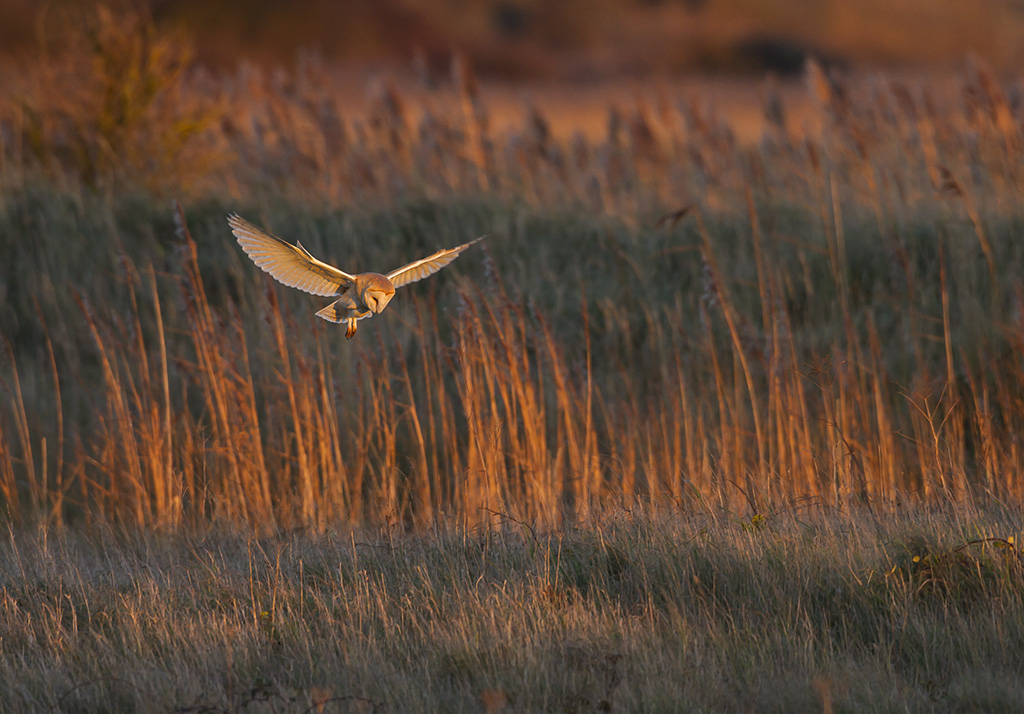 Nightjars have also increased, by 128% since 1981. They have recovered from previous dramatic declines, helped by the restoration of their heathland habitat by conservationists. Nightingale numbers, however, have fallen by 46% since 1995. This is likely to be due to loss of habitat, but also the degradation of their remaining breeding grounds.

Moth numbers have been hit hard in recent years. Two of the latest-flying moths in the UK are the aptly named December Moth and Winter Moth, whose populations have declined by 68% and 19% since 1970. Liam Creedon, from Butterfly Conservation, said: "As well as being important pollinators, moths are an absolutely vital cog in the food chain for other species such as birds and bats. Two-thirds of common and widespread larger species (macro-moths) have declined in the last 40 years. Ongoing habitat loss and the deteriorating condition of the countryside are believed to be the major factors behind these declines."

Things that go croak in the night

Other nocturnal species causing concern to wildlife groups include the Natterjack Toad, a heathland and coastal dune specialist. The species disappeared from 70% of its former range in the last century and by 1970 it existed in only 50 places in the UK. Conservationists from groups including Amphibian and Reptile Conservation have battled to save the toad by creating habitat and releasing Natterjacks to recolonise nature reserves. Its numbers have stabilised, but have yet to return to their earlier levels.

There is currently no population trend for native UK glow-worms, whose females glow as brightly as an LED light in order to attract flying males. However invertebrate charity Buglife is concerned about their status and has been carrying out a survey in Scotland this year to help provide information. Buglife is concerned that increasing levels of light pollution are one of the key threats to nocturnal wildlife. Every year the night sky is a little less dark and lights shining on glow-worm breeding areas, ponds, rivers and other wildlife habitats can destroy their natural ecology.

As well as birds, bugs and mammals there are also plants classed as nocturnal because their flowers only open after sunset to attract night-flying insects like moths. One is the night-flowering catchfly which, like many other arable farmland plants, has suffered strong declines in recent years.

RSPB scientist Dr Mark Eaton, a lead author on the State of Nature report, said: "When the sun goes down and we all go to bed, a whole range of creatures come out to hunt and forage under cover of darkness. The fields, woods and heaths are a fascinating place at night with moths, bats, hedgehogs and even night flowering plants emerging. Many of these species are suffering because of changes in our countryside but these declines would go unnoticed if it wasn't for the vital work of volunteer wildlife surveyors."