New information relating to a Critically Endangered South American bird has given scientists renewed hope for finding any remaining individuals in the wild – and a roadmap to save the species from extinction.

Purple-winged Ground Dove has been recognised as being at the highest risk of extinction since 1994, due to loss and fragmentation of its Atlantic Rainforest habitat.

The species has occasionally been reported, even as recently as 2017, but with no published photographs or sound recordings of the birds in the wild, scientists were increasingly pessimistic for its survival.

However, thanks to a Manchester Metropolitan University-led study published recently in Frontiers in Ecology and Evolution, a group of researchers from the UK, Brazil and Argentina have found evidence that the species might still exist and have discovered files which could help them with their search. 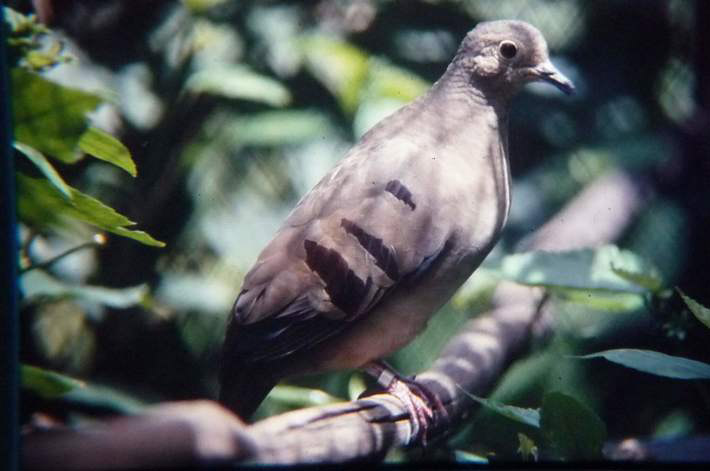 Purple-winged Ground Dove hasn't been documented in the wild for many years, although hope remains that it may still persist (Carlos Keller).

After collating historical records relating to the dove and analysing their distribution in space and in time, the team found the most recent reported sightings came from large remaining rainforest patches in Northern Argentina – which is where most hope now lies that the species may survive.

They also interviewed amateur bird keepers as records showed the species were once kept in captivity – and by doing so unearthed new videos and sound recordings of the birds, along with detailed notes about their biology and habits.

Researchers now plan to use the newly discovered sound recordings to search for existing bird species in the wild.

Dr Alexander Lees, Senior Lecturer in Conservation Biology at Manchester Metropolitan University and lead author, said: "Finding this previously unknown sound recording could prove critical in helping us locate this species in the wild again, as now we know what they sound like, we are far more likely to be successful in our search.

"Our chances of hearing the species are of course low, but by deploying dozens of autonomous sound recorders near seeding bamboo, and automatically searching for the vocalisations along the recordings takes the searching effort to a whole new level.

"It is also promising that our analysis of the sighting records do offer a glimmer of hope that the species may still persist – especially in the rainforests of Northern Argentina."

The team came across the recordings after speaking to aviculturist Carlos Keller, who bred Purple-winged Ground Doves more than 30 years ago – before captive breeding of the species was banned in an attempt to protect the birds from illegal trapping.

Researchers believe the loss of the captive population at this time was a bitter blow for conservation efforts, but hope that in the future, if they can find and capture wild birds, they could establish a successful conservation breeding programme using Carlos' specialist knowledge in the area.

Carlos said: "In the 1980s we knew this was a rare bird, but it still had a very wide distribution, so nobody realised just how close to extinction it was.

"It was a sophisticated bird, moving quietly through the darker, shadier parts of the rainforest. My hope is that although this is a species that is almost impossible to see, it is still out there and hopefully our research and the models we have created can help to guide searches to the most likely places that this species may still be clinging on."