New report on prospects for Golden Eagles in southern Scotland

A report published today finds that southern Scotland could support up to 16 pairs of Golden Eagle. The Scottish Natural Heritage (SNH) report found that, with suitable conditions, many more breeding pairs could inhabit southern Scotland.

The report presents a novel approach in which each of the nine principal regions is assessed for habitat suitability. The study explored several factors which can affect range use in detail, including rainfall, plant growing days, potential recreational pressure, persecution records, wind farm developments, nest sites and woodland cover.

The report suggests the next steps involve monitoring the ranges for any eagle activity, developing work to improve habitats and other conditions for eagles and assessing where further individuals might come from, notably in Argyll, Cowal and Arran. Practical work on the ground to benefit the species could be funded through a number of routes, such as the SRDP and FCS woodland grants. 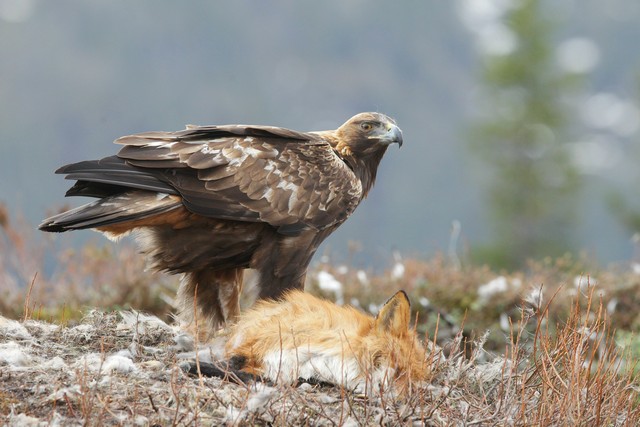 Environment and Climate Change Minister Paul Wheelhouse said: "It is great news that South Scotland could support so many pairs of Golden Eagles. This offers tremendous opportunities for wildlife tourism and the prospect of re-establishing a special population of these birds. I'm especially pleased to see so many partners have worked together on this project. As a resident of the Scottish Borders, I very much look forward to Golden Eagles once again becoming a regular sight in our skies. We will work hard to ensure that they are given the best possible chance to expand their population and range in the south of Scotland, given the region contains habitat that we would expect to see and sustain a greater population of this most magnificent bird."

Professor Des Thompson of SNH, and chair of the Project Group, said: "With our partners, we would like to see on-the-ground, practical work to improve the habitat for Golden Eagles in south Scotland. With habitat improvements, we could see connections with the small reintroduced population in Ireland. This would help both groups of eagles, and could even help bolster the population in north England. The approach is novel, and could work well for other regions and species."

The Golden Eagle is the UK's second largest bird of prey and has a wing span of around two metres. It was voted Scotland's favourite species by the public last year in the Year of Natural Scotland's Big 5 contest.