Harpy Eagle is one of the world's largest eagles and the biggest and heaviest raptor across its range in Central and South America. It typically inhabits tropical lowland rainforests. The species is listed as Vulnerable by BirdLife International, largely due to habitat destruction.

A new project has been launched to help preserve nesting habitat for the eagle in Colombia. Harpy Eagle requires large areas of well-preserved forest, with large, leafy trees to support an adequate prey population. However, such areas are at risk from high rates of deforestation and fragmentation due mainly to agricultural expansion and livestock. 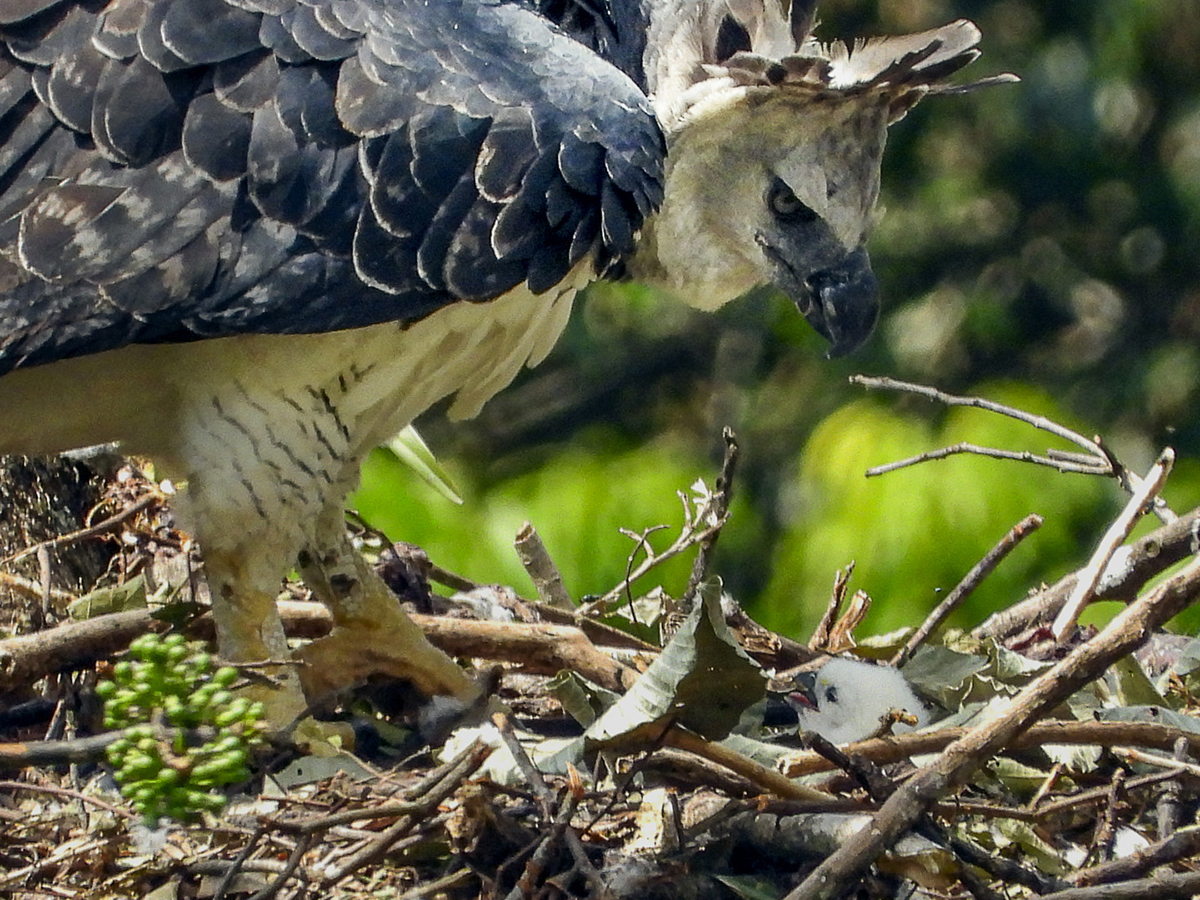 A new campaign has been launched to protect a Harpy Eagle nesting site in Colombia. This adult female and chick, ‘Morocho’, are occupying the site.

Information recently came to light of an easily accessible nesting site for the species, with the location occupied by an adult female and 15-day-old chick. Found by a member of the local community, the chick has been nicknamed Morocho. The finder has previously worked with staff from Mannakin Nature Tours, Fundación Camaná and Orinoco Nature Tours to identify areas worthy of conservation, and so brought the site their attention.

Local information says the nest has been active every year for the last 30 years. However, it is located on farmland with agricultural and livestock production. The owners have plans to increase production capacity, putting the nest site at imminent risk.

The three organisations have reached an agreement with the farm owners to allow purchase of approximately 140 ha of land for a total value of US$80,000. They have now launched a new campaign, #SaveTheHarpyEagle, in order to raise funds for the project. The campaign goals are threefold: buy the properties where the nesting area is located; develop research projects to determine the conservation needs of the species in a local way; and promote community participation in monitoring, environmental education and sustainable nature tourism.

Donations can be made via Paypal or Vaki. Anyone who would like to get involved in the project through conservation, environmental education, research and community social and economic development, should email info@manakinnaturetours.com.

The project has already started to work in the area. Current tasks include constant monitoring by the farmer who found the nest as well as other farmers in the area, to whom the organisers are paying a salary to guard and monitor the nest. They are also communicating with local communities about the importance of protecting Harpy Eagle and passing on any other information regarding nests or sightings of the species in the area.

"This is an excellent opportunity to promote the conservation of the Harpy Eagle, in a location that is easily accessible for research studies, linking local communities in education and tourism programs as an economic alternative for its development," Mannakin Nature Tours said in a statement.

Luis Urueña, director of Mannakin Nature Tours, talks about the project, as well as showing the nest site, in this short video.