The RSPB has launched a major new blanket bog restoration project at Dove Stone in the Peak District, after securing a grant of more than £228,000.

Over the past five years, staff and volunteers from the RSPB have already restored vegetation to large areas of bare peat and repaired gullies at Dove Stone, which it co-manages with landowner United Utilities. This work will continue with the Spreading the Mosses project, which involves planting over 70,000 individual handfuls of sphagnum moss across a 100 ha of moorland (the equivalent of around 150 football pitches) with the help of a team of volunteers. The substantial funding will come from landfill tax charity WREN.

Blanket bog is a globally scarce habitat, which plays an important role in storing carbon, improving water quality and giving wildlife a home. The upland areas of the Peak District used to boast thriving blanket bogs, but a combination of industrial pollution, wildfires and heavy grazing left them seriously damaged with large areas of exposed bare peat. 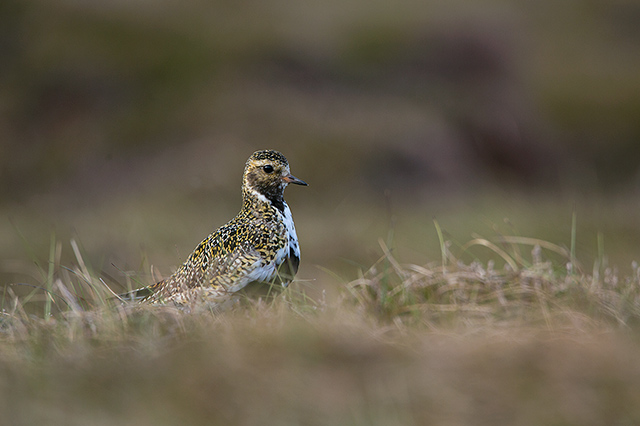 European Golden Plover will hopefully be encouraged to breed more often on the blanket bogs of Dove Stone in the Peak District (Photo: Marek Szczepanek)

Gareth Roberts, Project Officer for Spreading the Mosses, said: "Ever since moving to the Peak District 15 years ago, I've wanted to do my bit in helping to protect this landscape and the wildlife that depends on it. Over the past five years, the RSPB and their wonderful volunteers, together with United Utilities, have already made great progress in restoring the bogs at Dove Stone, and I am proud and excited to be continuing such important nature conservation work.

"I would love to hear from people who are equally passionate about the moors of the Peak District and who would be interested in working as a volunteer on this project. You'll learn some new skills, keep fit and meet some like-minded people."

Dove Stone forms part of a 57,000 ha estate of water catchment land owned by United Utilities throughout the North West. It is 10 years since the company began its award-winning programme of landscape restoration known as SCaMP.

Simon Boyland, Integrated Catchment Strategy Manager at United Utilities explained how the benefits are now becoming apparent:"We've transformed thousands of hectares of bare peat with sphagnum moss and blocked up miles of drainage ditches to re-establish boggy areas. Already we are seeing increasing numbers of birds and we are just starting to see evidence of improved water quality entering our reservoirs. Landscape restoration is a long-term process and it's wonderful to see more good work starting here at Dove Stone."

If you are interested in volunteering on the project call Gareth Roberts on 07834 148617 or email him at gareth.roberts@rspb.org.uk.