The RSPB is making a final call for anyone who hasn't got their nest boxes up yet to do it this week. The breeding season will get underway in early March and, while some birds may have already chosen their nest sites, there are still some who have yet to decide where they'll raise their family over the spring and summer months. Richard James, RSPB wildlife adviser, said: "If you've got nest boxes gathering dust in your shed, or have thought about making or buying one, then now's the time to do something about it. Ideally, nest boxes should go up in autumn for winter shelter followed by breeding, but you may just be lucky if you don't delay. It may be cold outside but if you can do one thing outdoors this weekend, make it that."

Nest boxes are excellent substitutes for holes in old trees. In the same way that we put out supplementary food in gardens to help our birds, we can also create extra homes for them. Tits will not seriously start to investigate nesting sites until February or March and Spotted Flycatchers won't be arriving in the UK until April or May. Some birds have multiple broods and Robins and Wrens may use a nest box that has recently been put up for later broods. Over 60 bird species are known to have used nest boxes, but the most regular residents who are most likely to move in are Blue Tits and Nuthatches, as well as House Sparrows and Starlings, both of which are declining. The species that use your nest box will depend on the type of box, where it is located and its surroundings. 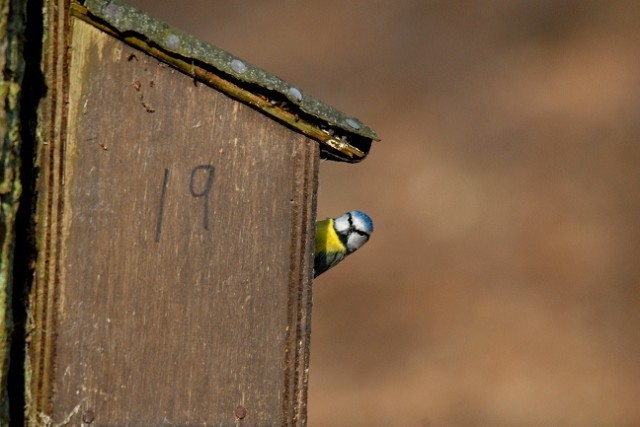 Boxes for Blue Tits, sparrows or Starlings should be fixed two to four metres up a tree, wall or the side of your house. Face the box between north and east away from strong sunlight and the wettest winds. These birds need clear flight-paths without clutter in front of the entrance. House Sparrows and Starlings will readily use nest boxes placed high under eaves, and two or three can be spaced out on the same side of the house.

Swifts nest on buildings and virtually nowhere else, so they really need our help with nest sites. Position special Swift boxes under the eaves of your house, away from any windows and out of the direct sun, wind and rain. The birds will start to arrive from their wintering grounds in Africa in May.

Robins and Wrens need open-fronted boxes placed low down, well hidden in vegetation. Woodpecker boxes need to be three to five metres high on a tree trunk with a clear flight-path and away from disturbance. To find out more about gardening for wildlife, visit www.rspb.org.uk/hfw.