Two Common Cuckoos, both of which were tagged last summer in north-east Mongolia, are racing north towards their breeding grounds after spending the winter months in eastern Africa.

The two males, named Onon and Bayan, are currently [11 May 2020] both taking a short break from their epic migrations in Meghalaya, north-east India, and Yunnan, China, respectively.

Remarkably, both birds' spring movements began within a day of each other, with Onon moving 450 km north from eastern Zambia to Tanzania on 20 March and Bayan moving a similar distance and direction from Mozambique to Zambia on 21st. Each made steady progress through East Africa until reaching Kenya by mid-April. 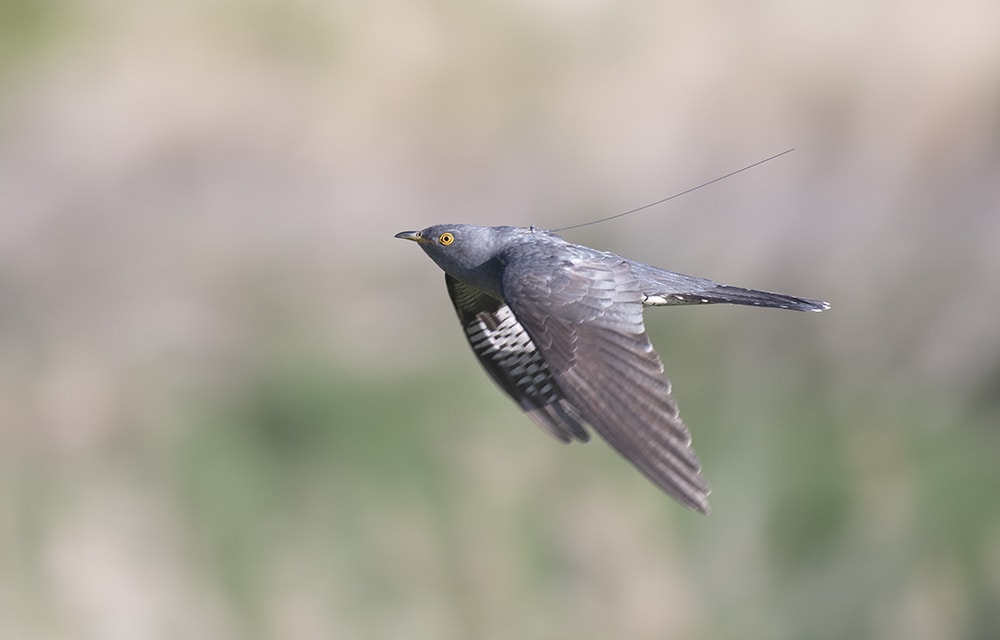 Common Cuckoos are being tracked both in Mongolia and closer to home. This BTO-tagged male was photographed in Norfolk in early May 2020 (Neil Calbrade).

The show began with the arrival of May. After leaving Kenya on 29-30 April, Onon's transmitter relayed a signal from western Madhya Pradesh, India, on 4 May. Despite the monumental feat he'd just completed, Onon didn't stop there and was in Bangladesh by the early hours of 6th. This translates to an astonishing 6,300-km journey in around six days, including a non-stop Arabian Sea crossing of at least 2,200 km.

Bayan's journey proved extremely similar, with signals suggesting a comparable route across the Arabian Sea to Onon, using tailwinds over the water to propel him to the Indian coast. By the early hours of 6 May, Bayan was in Gujurat, in western India; by that evening, he had crossed the country and was close to Kolkata, West Bengal. Not content with his work, he had moved into Yunnan, China, by 8th, meaning he had flown 7,200 km in seven days.

Each has been enjoying a well-earned rest over the past few days, but their respective journeys are expected to recommence again very soon. Bayan still has more than 3,000 km to travel, with Onon around 4,500 km. It'll be imperative for each to arrive on breeding grounds early, in order to claim an optimal territory, but neither wants to arrive too early, when there'll still be an overall paucity of invertebrate food on offer.

Onon and Bayan were tagged in June 2019 by the Mongolia Cuckoo Project, a partnership between the Wildlife Science and Conservation Centre (WSCC) and the British Trust for Ornithology (BTO), facilitated by Birding Beijing and supported by the Oriental Bird Club. The project aims to discover more about the wintering grounds and migration routes of cuckoos in East Asia, as well as engaging the public through naming and following the birds.

Regular updates are being posted on the Mongolia Cuckoo Project website, where there are maps charting the birds' progress, as well as on the Birding Beijing Twitter page.