One of Europe's most threatened butterflies has been discovered breeding on a site in mid-Wales where it had not been seen for more than 50 years, Butterfly Conservation (BC) has revealed.

Marsh Fritillary caterpillars have been found at the wildlife charity's Median Farm Nature Reserve at Cross Hands, Carmarthenshire, for the first time since the 1960s. The species has declined by 71 per cent across Wales in the last 30 years, but thanks to conservation efforts and the warm summer, the butterfly is now spreading to new areas.

George Tordoff, Senior Conservation Officer for BC Wales, said: "We have been restoring the land at this site for the last five years thanks to help from project partners, volunteers, cows and ponies and we have worked particularly hard to increase the growth of Devil's-bit Scabious – the food plant of Marsh Fritillary caterpillars.

"To see a new colony establish itself on restored land is great vindication of all that effort and although there is still a long way to go in making more of the reserve suitable for the Marsh Fritillary, we're absolutely thrilled to see how well the butterfly has responded to conservation work so far." 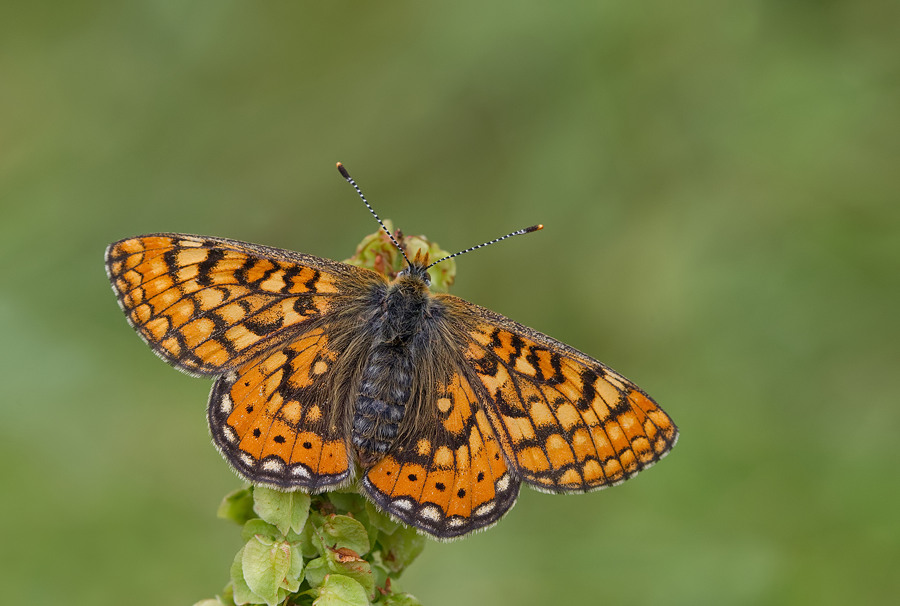 Marsh Fritillary is found in north-west and south-west Wales, as well as parts of Ireland, south-western Scotland and the south-west of England. The butterfly's yellow, orange and brown-coloured wings are more brightly patterned than those of other fritillaries and its caterpillars spin webs that are easy to find in late summer.

The land at Median Farm Nature Reserve, where the new colony can be found, is rented from Natural Resources Wales and the restoration has also been funded by Carmarthenshire County Council's award-winning Caeau Mynydd Mawr Project. The project is aiming to restore and manage over 100 hectares of habitat for Marsh Fritillary in the Cross Hands area.

Amanda Evans, Caeau Mynydd Mawr Project Officer for Carmarthenshire County Council, commented: "It's great to see such positive results and it is reassuring that all the work and investment at this site and many others in the project area is helping to secure the future of this rare butterfly."