Magnificent Frigatebird Admitted to Category A of the British List 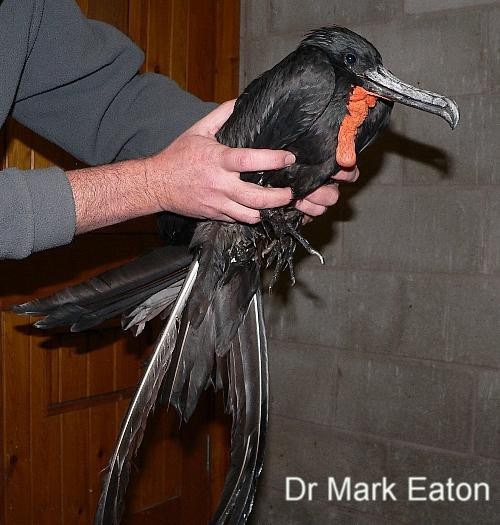 The British Ornithologists' Union Records Committee (BOURC) has accepted the record of an adult male Magnificent Frigatebird Fregata magnificens near Whitchurch, Shropshire on 7th November 2005, as the first British record.

The bird was initially found in a field near Whitchurch by Mr Handley, a local farmer. It was identified after being taken to Chester Zoo the following day, where it unfortunately died on 9th November (Birding World 18: 479-481). The specimen was deposited at the Natural History Museum (Tring).

This record was unanimously accepted onto Category A of the British List following a single circulation of the BOU Records Committee.

Unidentified frigatebirds were reported the previous day (6th November 2005) from Porthgwarra, Cornwall (heading towards Land’s End) and over Flat Holm island (in the estuary of the River Severn), Glamorgan (heading towards Weston-super-Mare). It is possible, though unproven, that these reports may relate to the same individual moving northwards, possibly following the line of the River Severn. The only previous record of a specifically identified frigatebird in Britain involved a first-stage juvenile Ascension Frigatebird Fregata aquila on Tiree, Inner Hebrides, on 10th July 1953. This was originally mistakenly identified as a Magnificent Frigatebird (Scottish Naturalist 65:193-194; British Birds 96: 58-59; BOURC, Ibis 98:154-157, Ibis 141: 175-180) but later research by BBRC during a review of 1950-58 records resulted in the bird being re-identified as an Ascension Frigatebird in 2002 (British Birds 96: 58-73, 454; BOURC, Ibis 146: 192-195).

An adult female Magnificent Frigatebird was recorded from Scarlett Point, Isle of Man, on 22nd December 1998; which it was taken into care and died there in October 1999 (Birding World 12: 458-459). Records from the Isle of Man do not form part of the British List. Identification of frigatebirds is not easy, compounded by a paucity of biometric data in the literature. Nonetheless, identification of the Shropshire bird as Magnificent was confirmed by a combination of biometrics (especially of the wing and bill) and the presence of a purple sheen on the plumage. The measurements were at the lower end of those recorded for male Magnificent Frigatebirds, suggesting that the bird may have originated from the Caribbean population.

It was also noted that both the Shropshire and the Isle of Man Magnificent Frigatebirds were discovered following the passage of Category 5 hurricanes from the Caribbean across the Atlantic in a north-easterly direction.

Magnificent Frigatebird occurs along the Pacific and Atlantic coasts of America, from Baja, California to Ecuador, including Galapagos, and from Florida to southern Brazil; there is also a relict population on the Cape Verde Islands off West Africa. The species is monotypic.

Bob McGowan, Chairman of BOURC, commented "The Shropshire Magnificent Frigatebird was a fairly straightforward record to assess, largely in light of the thorough identification groundwork on frigatebirds that took place during the review of the Tiree record. As F. magnificens is the likeliest frigatebird taxon to occur in Britain (which partly explains the erroneous identification of the Tiree bird), and with the precedent of the Isle of Man occurrence, the Shropshire record was unanimously accepted following e-circulation."

As there was no reason to doubt that the bird had occurred naturally, the Committee agreed to accept this to Category A of the British List.