A group of Capercaillie experts and enthusiasts have been visiting two Highland estates to find out why numbers of the rare species are increasing in the face of serious declines in other parts of Scotland. Earlier this month, the Friends of Capercaillie were invited to visit Inshriach Forest, owned by Forestry Commission Scotland, and the privately owned Glenfeshie Estate. Across Scotland — the only place in Britain where Capercaillie are found — there are thought to be fewer than 1,300 of these magnificent turkey-sized birds remaining. Nationally they appear to be declining still further in their former strongholds such as Deeside, but the Speyside population is holding up well and even increasing on some sites, in spite of 'challenging' summer weather that affects productivity.

Only 9 lekking cocks were counted in 2006, but lek counts this year reported 33 cocks across Inshriach and at Glenmore, the Commission's other forest in the area. Graeme Prest, who manages Forestry Commission Scotland's Inverness, Ross & Skye District, said: "Numbers in Inshriach have increased — and the increase is impressive considering the big declines over much of the rest of the range. Something appears to being working well here for Capercaillie — and we were keen to show the 'Friends' what we have been doing and the impact it appears to be having. Much of that success seems to come down to the fact that we are learning how to manage our multi-purpose Scots pine forests in ways that allow us to strike a balance between the needs of Capercaillie and the demands of timber production and recreation. It's a fairly new way of working that demonstrates that, with careful planning, Capercaillie populations can thrive in forests that produce timber. It appears to have achieved some very positive results. There is still work to do but we hope the Friends will get some ideas of what measures might be taken in other areas to try to help reverse the decline of caper populations." 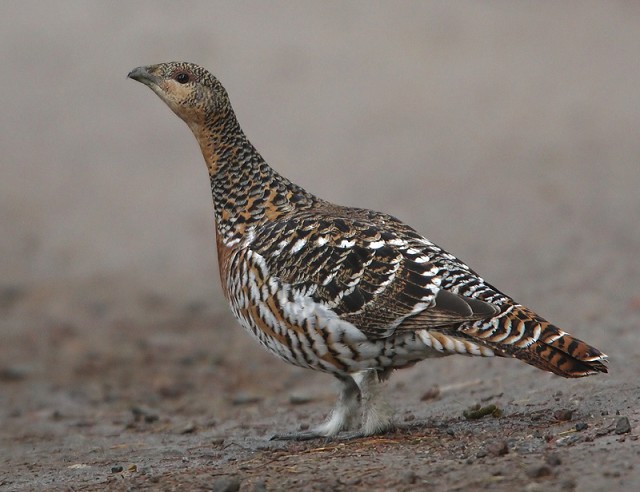 As well as learning more about the work of Forestry Commission Scotland in the area, the group were also given a unique insight into how privately run estates are making efforts to conserve the Capercaillie. Thomas MacDonell, Director of Conservation for WildLand Limited, and Mr Anders Holch Povlsen, who manages and owns the Glenfeshie Estate, said: "It's been a real pleasure to welcome the Friends of Capercaillie, and to share our Capercaillie success story. We now have approximately 800ha of forest regeneration in Glenfeshie following extensive deer reduction a few years ago, and the response of the Capercaillie and other species such as Black Grouse to this new mosaic of rich habitats is exciting."

The Friends of Capercaillie — made up of conservationists, landowners and anyone with an interest in Capercaillie — works with private landowners, Scottish Government and financial supporters, to reverse the decline of Capercaillie, undertaking both conservation and advisory work. It is led by the Earl of Lindsay and it seeks to highlight the plight of the Capercaillie and to focus attention on its survival requirements. Inshriach is managed by Forestry Commission Scotland, which works closely with RSPB and Rothiemurcus Estates to manage land in ways that will improve the habitat for Capercaillie. If you are interested in helping this work and joining the Friends of Capercaillie, contact alison.connelly@rspb.org.uk for a joining form.