A woman who ran her own bird hospital in Bury has been banned from keeping birds for life following an RSPCA prosecution.

Officers from the animal welfare charity and police attended Greenmount Wild Bird Hospital in Tottington following a report by a member of the public who was concerned about the welfare of the birds at the site. During the execution of the warrant, which was carried out on 5 July 2019, the court heard 211 birds were found at the premises and of these, 145 were found to be in a suffering state. 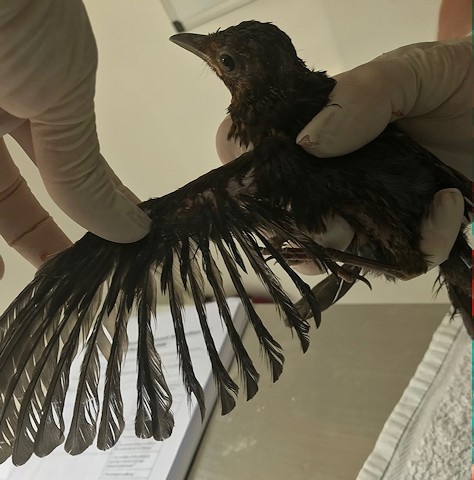 A Blackbird found during the wildlife hospital raid (RSPCA).

As well as the life-time ban on keeping animals, magistrates at the sentencing hearing on 17 September also handed Kerr a four-month community order with a curfew between 7 pm and 7 am. She was also ordered to pay £1,000 costs and a £90 victim surcharge.

Magistrates were told how some were blind, some had open wounds, others had broken wings and one had a beak so severely damaged that he couldn’t feed himself and was emaciated. Natalie Kerr, 60, of Bury, who ran the premises, pleaded guilty to two Animal Welfare Offences when she appeared at Manchester Magistrates' Court.

The court heard how a team of RSPCA animal rescuers and vets found various birds including pigeons, corvids, [[Blackbirds], an eagle owl, swans and geese in aviaries around the grounds. Many birds could not fly and were visibly injured or in poor condition.

Inspector Emma Dingley, the RSPCA officer leading the investigation, said due to the number of birds which needed to be assessed, a mobile unit from the Greater Manchester Animal Hospital was sent to the site. Sadly, of the 211 birds examined, a vet decided 145 were suffering and were put to sleep on welfare grounds.

In a court statement RSPCA Chief Inspector Ben Strangwood said: "The aviaries were all looking tired and contained a lot of bird faeces and cobwebs. Some of the birds appeared unable to fly and were largely ground-dwelling, resulting in their feathers being a mess. In the hospital unit, some birds had notes/records on their cages and some did not. Some birds had food and water and some didn’t. Some cages were very dirty with faeces. There were lots of flies and the smell was unpleasant.

"There were birds in there with head tilts, bandages/tape on wings, open wounds, glassy eyes indicating blindness, drooping wings, feathers in very poor condition. One pigeon had a deformed beak which meant it was unable to feed himself and he was emaciated; he notes indicated he had been named Beaky by the hospital. Another duck was found with two broken wings which the hospital had named Wingie. There was also a pigeon with an open wound you could see his heart. It was so sad and a vet decided that many had to be put to sleep to end their suffering."