Learning about the birds and the bees

Back in 1962 Rachel Carson wrote a landmark book, Silent Spring, which changed the way we think about our relationship with the environment. It explained in plain English how the uncontrolled use of DDT was killing many animals (including humans), but particularly birds. Its publication ultimately led to the banning of DDT, but its real legacy was a heightened awareness of the fragility of nature, and its vulnerability to human interference.

Sadly certain lessons have not been learned, and we're exploiting our environment now more than ever. Farming is prime example, where EU policies and technological advances have resulted in habitat loss on a colossal scale. Unsurprisingly wildlife has suffered, including birds (Corn Buntings spring to mind), but it seems as if bumblebees have been particularly hard hit. Sadly three species are already nationally extinct and only 6 of our 25 native species remain relatively common. Perhaps we're approaching a Silent Summer? However, there are things that we can all do to help, and I'm hopeful that birders might be interested in finding out more...

I'm a birder myself, but during the quiet summer months I started passing the time by looking at butterflies, dragonflies, bumblebees and so on. With most bird species industriously tending chicks, I was grateful for the buzzing of bees breaking the silence. Perhaps I'm not alone—maybe all birders are essentially naturalists a heart? The more I learnt about bumblebees the more fascinated I became—they really are incredible little insects. Hopefully I can convince you to join us in trying to conserve them.

So what exactly are bumblebees?

That's not such a silly question! The UK has around 250 species of bee, of which one is the honeybee, 25 are bumblebees (of which 3 are extinct), and the remainder are small solitary species. There are also many other insects (including some hoverflies, moths and beetles) which seek refuge from predators by pretending to be bumblebees, so it can be confusing. I'll come back to identification later, but suffice to say it shouldn't be difficult for skilled naturalists who can identify waders and warblers!

A small solitary bee, typical bumblebee and a honeybee (from left to right).

Bumblebees (like honeybees) are social insects—a colony consists of a queen and a number of sterile (female) workers. The queens emerge from hibernation and start new nests (either in tussocky grass, underground or in some other natural cavity). Each queen forms a clump of pollen and a little wax nectar pot just within reach, which she fills to the brim with honey. She then lays a clutch of eggs in the pollen clump, which she incubates for 4 to 5 weeks in total (does this sound familiar?!). To begin with she doesn't leave them, and because she has no mate to bring her food, she relies on the stored honey in her pot. She shivers constantly, which generates enough heat to keep the clutch at about 32°C. 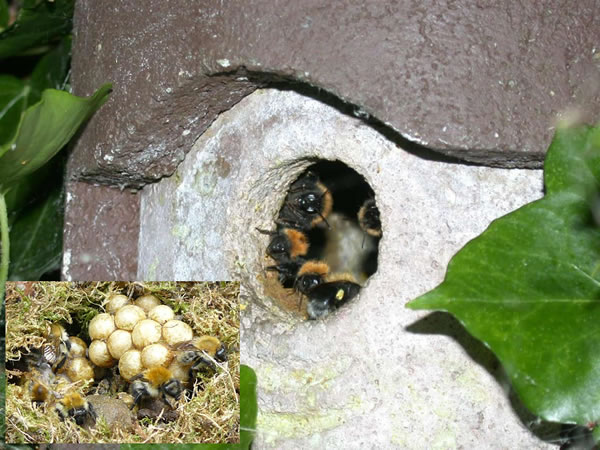 Bees 1—Tits 0 This is a nest of the Tree Bumblebee (a recent arrival from France), which as the name implies likes to use holes in trees. The inset shows inside a nest (of the Common Carder bumblebee)—you can see the wax cells in which the larvae are reared. (Photos: Juliet Osborne and Sue Thomas).

After about 4 days the eggs hatch, and the queen begins foraging regularly for nectar and pollen to feed to the larvae. This a delicate time, as a shortage of forage or dodgy weather could cause the young queen and her colony to perish. All being well, a month or so after hatching (fully grown) worker bumblebees emerge from cocoons and take over most of the work—the queen now just lays eggs. The colony grows throughout the summer, producing successive broods, and can peak at around 400 workers. 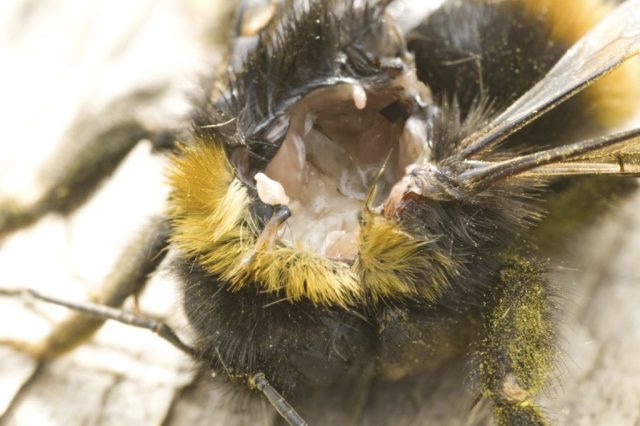 Bees 1—Tits 1 First they learnt to steal cream from milk bottles, and now it seems as if they've discovered the tasty meat inside a bumblebee thorax—we're hoping if doesn't catch on! This bumblebee was still alive, believe it or not! (Photo: Richard Knisely-Marpole).

Interestingly, the workers emerge in a range of sizes, and the large ones go off foraging, whilst the smallest stay in the nest and do chores. Even foraging workers vary in size, and they specialise in visiting flowers which suit their tongue length—much like the waders on tidal mudflats. Towards autumn the colony switches to producing new queens and males which leave the nest to find mates. It's around this time that chaos often breaks out, because the workers don't like the queen producing males (their brothers), so they'll try to destroy her male eggs (which she doesn't like!) and a big fight kicks off, in which the queen is often murdered. It's all to do with relatedness, which is what underpins the whole social system. 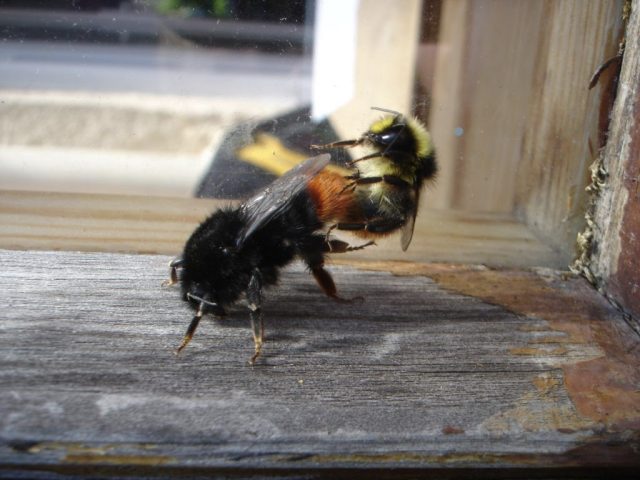 Mating bumblebees—an unusual sight Once 'coupled' the male just lets go and lies back, suspended only by his genitals—definitely not something to try at home! (Photo: Michael Gibbins).

And what is all the fuss about?

The UK has roughly 18 native species of 'true' bumblebee (there are lumpers and splitters in the bumblebee world too!), and of these nine are either already extinct or are UK Biodiversity Action Plan priority species—that's the highest percentage of any insect group. Interestingly, we also have 6 cuckoo bumblebee species, which do exactly what it says on the tin, taking over established nests, killing the queen, and commandeering her workforce to raise their own young.

Bumblebees are, of course, extremely important pollinators of both wildflowers and crops, so the consequences of these declines are far reaching. It's hard to imagine a more important group than the pollinators, and harder still to predict what will happen if these declines continue. It's been said that every third mouthful of the food we eat relies on bee pollination, and so do most of the wildflowers we're accustomed to seeing in the countryside. 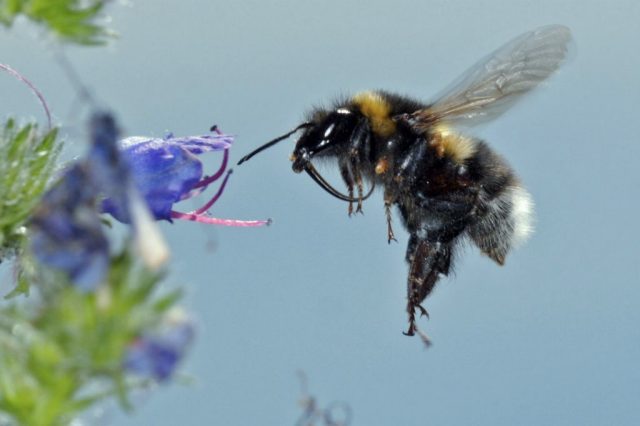 A Garden Bumblebee visits Viper's Bugloss but notice how she's smelling the flower before landing on it. Bumblebees have smelly feet, and leave a mark on every flower that they've visited. Foragers learn to avoid cheesy flowers, which are likely to offer little reward. (Photo: Ben Darvill).

Why are they declining? It's essentially down to habitat loss (rather than disease; that's honeybees). The post-war drive towards increased self-sufficiency, coupled with the spread of urban development, has led to the loss of many wildlife-rich habitats such as lowland hay meadows, marshes and hedgerows. Over 97% of Britain's flower-rich grasslands have disappeared in the last 60 years. As a result, the number of bumblebee species that you might expect to see in lowland Britain has roughly halved since 1950.

Sadly, unlike butterflies, rare bumblebees can't hang on in remaining habitat fragments (nature reserves etc.). The lights keep going out on the distribution maps, irrespective of habitat quality, and we've recently found out why. It turns out it's all down to 'meta-population breakdown'. Population sizes are small (because one entire nest is effectively one breeding pair) so they're prone to going locally extinct just by chance. Add to this the fact that dispersal range is limited, particularly in the rare species (~10km), and you have a recipe for meltdown. The bad news doesn't stop there I'm afraid. These small and isolated populations are prone to inbreeding (which is never a good thing), but in bumblebees it's particularly problematic. The unusual way by which the sex of an individual is determined results in inbred colonies producing males in place of female workers. The males, it turns out, are only interested in drink and sex, and are no use around the house whatsoever. Hard to believe I know...

So how can I help?

By taking part in casual or more formal recording, by joining BBCT, and by managing your garden (or farm, if you have one!) in a sympathetic way—I'll cover each in turn.

I'm hopeful that after reading this article, some (if not all!) of you will take a renewed interest in the bumblebees that you see in your garden, or when you're off on a walk. One of the major challenges we face is producing accurate, up-to-date distribution maps—so the more recorders we can recruit the better. We're running a national survey (Beewatch 2008), and it would be great if you were able to help with that. Digital photos are all that we need, along with a date and grid ref. There's an identification guide on the website, and a photo gallery—hopefully useful for those wishing to learn how to identify bumblebees themselves. It's really not that hard—the key questions are: male or female, true or cuckoo and what are the banding patterns—beyond that there are mercifully few plumage variations! With close-focussing binoculars and a little patience you can quickly learn to identify the commoner species. Records of the scarcer species are highly desirable—preferably backed up with a photo to get them past the infamous BOU records committee (BeeWatch Observations Unit)! 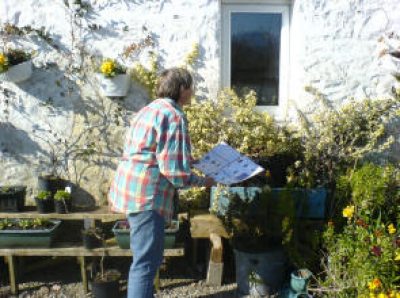 Why not keep an eye out for bumblebees next time you're off on a walk? Our ID sheets can be printed off and taken down the garden, or folded inside the cover of your bird book!

If you get hooked on bumblebees and would like to find out more or support our work then I'd really encourage you to join the Trust. Members receive an ID poster, our full colour newsletter tri-annually, various other goodies, and get to attend ID training walks and so on. We had around 2000 happy members at the last count, and of course the more support we have, the more we can achieve! Adult membership costs just over £1 per month...

Finally, could you find space in your garden for bumblebee-friendly flowers throughout the year? Or for bumblebee nesting sites? Traditional cottage garden types seem to go down well, along with certain wildflower species. Rare species in particular seem to be heavily dependent on high-quality protein-rich pollen, which they can only get from certain flowers. More information on gardening for bumblebees and providing nest sites can be found on our website, for those interested. 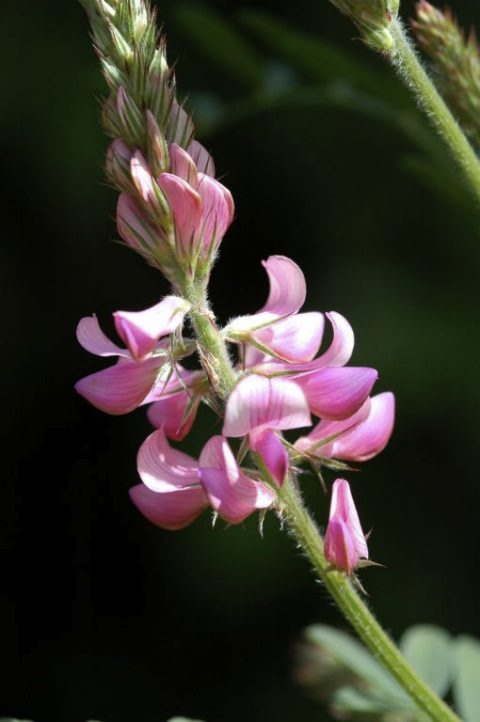 Sainfoin one of many beautiful wildflowers which thrive in domestic gardens and are great for bumblebees. The pollen produced by members of the pea family is particularly rich in essential amino acids. Rare species in particular seem to need the 'superfoods' in order to thrive (photo: Ben Darvill).

If you've made it this far, then I hope you've enjoyed the article, and I wish you much pleasure from bumblebee watching in the future!