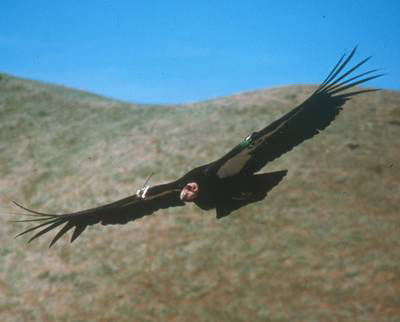 The conservation of the California Condor - one of America's most high-profile reintroduction projects - has received a helping hand from a 270,000-acre ranch that is home to the state's largest private hunting program.

Tejon Ranch Company, working with the U.S. Fish and Wildlife Service and Audubon California (BirdLife in the US), have announced they are to discontinue the use of lead hunting ammunition on their privately owned ranch in California's Tehachapi Mountains.

California Condor has declined rapidly throughout the 20th century, so much so that in 1987 the species became extinct in the wild when the last six wild individuals were captured to join a captive-breeding recovery programme. Conservationists have attributed this drastic population decline principally to persecution and accidental lead ingestion from shot carcasses.

"Kudos from Audubon to the Tejon Ranch for not only making the right decision, but for its leadership role in ending the use of lead ammunition on the ranch," said Glenn Olson, Vice President and Executive Director for Audubon California. "As California's largest private landowner, Tejon Ranch and its decision today highlights the role private landowners can play in conservation."

While tremendous progress has been made in bringing the bird back from the brink of extinction, poisoning from lead ammunition remains the single greatest threat to the continued recovery of the California Condor. The recent move by Tejon Ranch is the latest effort by the Ranch to help protect the condor, which has historically used portions of Tejon Ranch for foraging and roosting.

"We have a 170-year history of stewardship on the Ranch, which means when we learn a better way to manage our land's resources, we adapt." commented Robert A. Stine, President and Chief Executive Officer of Tejon Ranch Company.

"To ban use of lead ammunition over such an expansive area is a real step forward for the recovery of California Condor," said Dr Stuart Butchart, Global Species Programme Coordinator at BirdLife International. "It's a great example of how private landowners have the potential to improve dramatically the chances of survival for highly threatened species."

Find out what you can do to support Audubon's efforts to ban completely the use of lead ammunition in the condors' native range - click here.