A study has found that ‘land sparing’ – the setting aside of land for biodiversity conservation – could revitalise certain British species. Andrew Balmford, a professor of conservation science at the University of Cambridge, and a team of researchers compiled the data, which shows that more intensive farming might free up more land, creating the opportunity for rewilding greater areas of countryside. This, in turn, could generate significant increases in populations of some farmland birds.

European Turtle Dove is one species closely associated with rewilding, with a dramatic increase at the Knepp Estate in West Sussex (Andrew Moon).

The research lays out how farming intensively to increase yields while turning over much larger areas of farmland to wildlife would – if combined with actions to cut wastage and meat consumption – meet Britain's demand for food, while simultaneously more than doubling the populations of breeding birds. The findings were presented at a rewilding conference organised by the Cambridge Conservation Forum, with Balmford and his team studying food production and birdlife on the Cambridgeshire Fens in order to understand how larger amounts of farmland could be given to wildlife.

In order to meet Britain's growing demand for food, it's been estimated that farmed land must increase by almost a third in the next 30 years – a figure that means increasing yields is inevitable. If wastage and meat consumption were reduced significantly, less intensive and wildlife-friendly farming could take place on current farmed land in various ways, with 5 per cent spared for nature. The research suggests 101 species would increase by some 50 per cent as a result.

However, if yields on 25 per cent of farmland were increased to the highest levels found on the Fens, with another quarter farmed in a nature-friendly way, future food demand would still be met. The difference, though, would be that half the remaining land could be set aside for wildlife, with resulting dramatic increases in birds: in the Fens, populations rose by roughly 250 per cent, with rewilded areas harbouring many of the beneficiaries, though the low-intensity farmland also saw conservation benefits.

Balmford commented: "We’re not arguing for business-as-usual industrial farming, but we have to be mindful of yield. We need a twin-track where we get serious about using some of our landscape in a way that's much better for biodiversity and ecosystem services, but that must be linked to incentives enabling some farmers to be productive in sustainable ways on remaining farmland. If we don't, it's a sleight of hand – we'll just buy our food from somewhere else and offshore the problem." 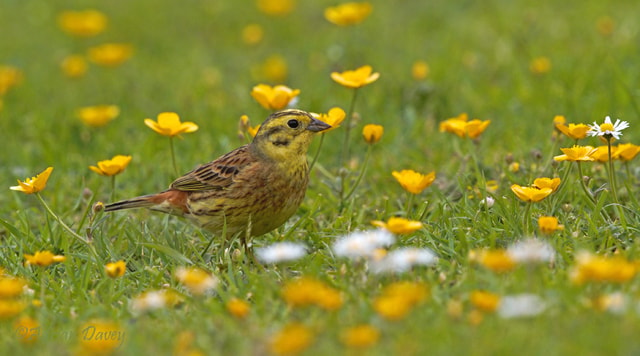 Yellowhammer has increased on low-intensity farms in the Fens (Adrian Davey).

If land sparing is taken up in the post-Brexit farm payments being developed by Michael Gove, some fear it could lead to unprofitable upland farms being turned over to nature while fertile lowlands are intensively farmed – upland farmers object because they fear the practice will force them to give up farming.

Although organic farmers and some conservationists have concerns that raising yields would lead to more environmental damage, research by Balmford and his colleagues found that in four types of farming – including European dairy farming and wheat production – intensive systems were usually less polluting than organic and low-intensity methods.