England's most famous wildlife family is the centre of attention again today with the announcement that the Ospreys nesting in Cumbria have successfully hatched eggs and have produced two chicks. 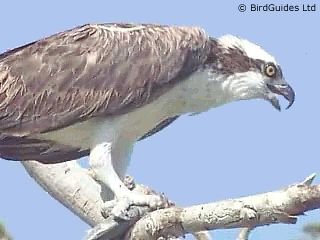 After a tense five weeks of anticipation, the first egg is thought to have hatched on Monday evening and the second late yesterday. The news is especially welcome because the chicks are the only ones known in an Osprey nest anywhere in England.

The news that there are two young in the nest has delighted the Lake District Osprey Project team, a partnership of the Forestry Commission, Lake District National Park Authority and the RSPB, who have maintained a round-the-clock guard over the rare birds since they started nesting in April.

The female bird has been seen feeding her young and the male bird is bringing regular deliveries of freshly caught fish into the nest.

The project partners have provided public viewing facilities at two sites in the Lake District and the arrival of the young ospreys is likely to provide a welcome extra boost to tourism in the area. An estimated 30,000 people have already seen the nesting Ospreys and more visitors are expected in the coming months.

The Ospreys are nesting close to Bassenthwaite Lake, near Keswick. Until Ospreys nested last year and raised one chick, there had been no recorded nest in Lakeland for at least 150 years. The return of the birds to England has been hailed as one of the greatest conservation success stories of recent years.

The fortunes of the now famous pair of Lake District Ospreys have been closely followed in the UK and worldwide over the last few months. More than 12,000 people so far have visited a special Osprey Viewpoint at Dodd Wood near Keswick, where telescopes are on hand for visitors to view the Osprey's nest.

Around 17,000 people have also visited the nearby Whinlatter Visitor Centre to see live pictures of the birds relayed from a Big Brother-style camera overlooking the nest. The Ospreys are also Internet stars, with pictures from the 'spy on the nest' camera available at www.ospreywatch.co.uk and www.bbc.co.uk/cumbria

Welcoming the news, Bill Kenmir of the RSPB said: "The last few weeks have been incredibly exciting but also a very tense time for everyone involved. The male Osprey arrived in early April but the female kept him waiting for several weeks before she returned. After that, it was a whirlwind courtship and by 10th May, the pair were incubating eggs. We are thrilled and delighted that both eggs have successfully hatched and that England's Ospreys are raising twins."

Graeme Prest of the Forestry Commission said: "Thanks to the Internet and with the help of English Nature and BBCi, the fortunes of the Lake District Ospreys are being followed by fans worldwide. So far, we have had messages of encouragement sent to the team from as far afield as the USA, Canada, Spain, Norway, Austria, Australia and Japan, all wishing us well in achieving our goals for the project. It's fantastic that there is such a global following for these wonderful birds. I hope our international supporters will be delighted by this latest result for England!"

Pete Davies of The Lake District National Park Authority, said: "The presence of these spectacular birds has given a real boost to this special area of the Lake District. The National Park has been delighted that so many people are now more aware of the wonderful wildlife in this part of Cumbria and have enjoyed visiting the Osprey Viewpoint or watching the birds on camera."

The project team says that this is still a very anxious time as the chicks are initially helpless after hatching and vulnerable to bad weather. They will be carefully tended and fed by their parents until able to fend for themselves but good weather is needed so that the male can hunt successfully and bring in sufficient fish for his new family. The Ospreys have already had to cope with the vagaries of the Cumbria weather and the nest has been battered by torrential rain, gales and thunderstorms.

If all goes well, the chicks should make their first flight from the nest in mid-August.

The Lake District Osprey Viewpoint gives open-air viewing of the nest from a safe distance. It is located at Dodd Wood, 3 miles north of Keswick, off the A591 - follow signs to "The Mirehouse". The Viewpoint is open all daylight hours; park at NY235282, then walk uphill for 10 minutes to view the nest. Between 10am and 5pm, Osprey project staff are on hand with telescopes for visitors to use.

Pictures from the camera overlooking the osprey's nest are relayed to television monitors at the Forestry Commission's Whinlatter Visitor Centre, located west of Braithwaite on the B5292. A generous donation from English Nature has allowed the video link to be set up and BBC Cumbria have made it possible for pictures to appear on the Lake District Osprey Project website - www.ospreywatch.co.uk and www.bbc.co.uk/cumbria