It's A Tern Up For The Record Books 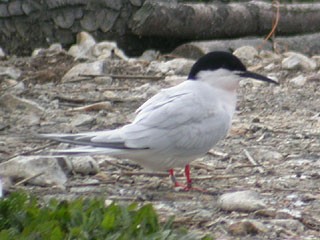 Giving a helping hand to Britain's rarest breeding seabird has resulted in bumper numbers nesting on a tiny Northumberland island this year, the RSPB announced today.

At least 67 pairs of Roseate Terns have set up home in special man-made love nests provided by the RSPB on its 14-acre Coquet Island, situated off the Northumberland coast. The island now has the largest breeding colony of roseate terns in the UK and the entire English population is thought to be nesting there this year.

Numbers of the birds nesting on the island have more than doubled in the last five years - in 1998 just 29 pairs nested. Last year 57 pairs of roseate terns nested on the reserve and RSPB wardens are jubilant that numbers have increased again this year. The wardens say that it is possible that there are still more nests to be recorded.

Special nest boxes have proved to be a big hit with the rare seabirds, giving shelter for both eggs and chicks. More than 100 nest boxes have been put out this year and all the breeding Roseate Terns have taken advantage of these starter homes to rear their families. The nest boxes are placed on specially created terraced areas on the island and provide protection for the precious nests.

RSPB Coquet Island warden, Paul Morrison, said: "This is outstandingly good news for such a rare bird. Coquet Island is one of only a handful of sites in Europe where Roseate Terns nest and this makes Northumberland an internationally important stronghold for these beautiful seabirds.

"The nest boxes have proved to be a huge hit with the Roseate Terns and the fact that they have been adopted so readily by the terns is wonderful news. A lot of the work that we carry out on Coquet is based on the success of the seabird colony on Rockabill Island in the Irish Republic, so this is a great example of how sharing good ideas and trying out new conservation management techniques is paying dividends for wildlife."

As well as the 134 breeding birds (67 pairs), there have also been up to 50 other Roseate Terns present on Coquet Island this year, and the RSPB is optimistic that these birds will return to nest in future years.

Roseate Terns are summer visitors to the UK, but populations have plummeted since the 1960s for reasons that are still not clear. The terns, which have long tail feathers, pale grey plumage and a rosy tinge to their underparts, are long distant migrants. They spend the winter off West Africa, heading north in spring to nest on coasts and off-shore islands.

This project is part of the Wildlife Guardians Scheme supported by the SITA Environmental Trust through the Landfill Tax Credit Scheme, and Scottish and Southern Energy plc.

There is no public access to Coquet Island itself and landing on the island is not permitted because of the disturbance to nesting seabirds. Trips from Amble, organised by a local boatman during the summer, sail close to the island, but do not land. For details, contact Amble Tourist Information Office on 01665 712313.
Written by: David Hirst, RSPB
Login to leave a comment
Return to List