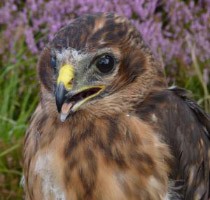 Five Hen Harrier chicks fledged on National Trust land in the Upper Derwent Valley, Derbyshire, this summer — the first time the species has bred successfully in the Peak District for eight years. This welcome news was, however, tempered by the subsequent discovery that three of the birds later died, at least two of them apparently as a result of natural predation.

Hen Harrier has been under serious threat in England for many years, with numbers plummeting nationwide to the brink of extinction within the country, primarily due to illegal persecution. The 2013 season saw just two pairs attempt to breed and, for the first time in over 50 years, no young fledged.

The plight of the species has recently been the subject of an extensive social media campaign which cumulated in the first 'Hen Harrier Day' on 10 August, of which one of the events took place in Derbyshire — incidentally not far from the nest site. The cause has also been supported by cosmetics company Lush, which featured Hen Harrier displays in all of their UK stores.

The positive outcome in Derbyshire is the result of a wide partnership of people and organisations that have worked together to protect the birds and their nest as part of the National Trust's High Peak Moors Vision for the area, which aims to restore birds of prey as part of a rich and healthy ecosystem.

From late April two males and a female were seen 'skydancing'. The birds then appeared to leave the area but, in early August, a nest containing five healthy chicks was discovered by Geoff Eyre — a local National Trust shooting tenant. Mr Eyre alerted the Peak District Birds of Prey Initiative, the partnership set up to help secure the future of some of the area's most iconic and threatened birds, who put in place a nest watch team, providing daily monitoring.

Jon Stewart, the National Trust's General Manager for the Peak District, said: "Having Hen Harriers breed successfully here in the Peak District is wonderful news and would not have been possible without the hard work and commitment of all the people and organisations involved, which has been truly inspiring. Trust, collaboration and a protocol to limit unintentional disturbance have all played important parts... the vision for the land that we manage is all about enhancing the quality of the habitat, enabling nature to flourish."

Satellite-tagging will enable the birds' progress to be tracked through the National Hen Harrier Recovery Project led by Natural England, helping us learn more about their movements and behaviour. Sightings of the birds can also be reported via a Hen Harrier hotline (0845 4600121 — calls charged at local rate) and email address. Reports of sightings should include the date and location of sighting, with a six-figure grid reference where possible.

Jamie Horner, Project Officer with the Peak District Birds of Prey Initiative, added: "It's been brilliant to see everyone working together to help this breeding pair of hen harriers succeed and I hope it bodes well for birds of prey and wildlife generally in the Peak District. Of course we also want people to be able to enjoy these spectacular birds, so please let us know of sightings but please also respect the birds' space and avoid disturbing them."