Gray Catbird added to Category A of the British List 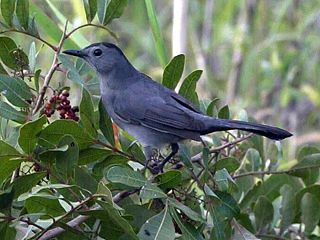 The date and west coast location are consistent with natural vagrancy from North America. Another North American vagrant, a Red-eyed Vireo, was found at the same site on the 4 October. An investigation into the captive status of Gray Catbird revealed that it was unknown as a cagebird outside North America. The bird was extraordinarily elusive during its two-day stay, but was described sufficiently well to establish the identification beyond doubt. It was not photographed.

This record constitutes the sixth confirmed occurrence of the Gray Catbird in the Western Palearctic. The only other British record relates to a bird that arrived in Portsmouth, Hampshire on board the QEII cruise liner on 21st October 1998. The bird was not known to have left the ship while it was in port, and was not admitted to the official British List as its passage to Britain was human-assisted, with the bird being fed during the trans-Atlantic crossing. There is a single record of Gray Catbird from Ireland on Cape Clear, Co Cork, on 4 November 1986, plus one from Jersey, Channel Islands, during October-December 1975. These records do not form part of the British List.

The British Ornithologists' Union, founded in 1858, is one of the world's oldest ornithological societies. The BOU's main function is to 'promote ornithology within the scientific and birdwatching communities'. This is achieved primarily by the publication of BOU's international journal of avian science, Ibis, one of the world's leading ornithological journals. Ibis includes original research reports on the systematics, ecology, physiology, behaviour, anatomy and conservation of birds. Ibis is also available online at www.ibis.ac.uk. The BOU also organises conferences, seminars, meetings and expeditions and gives a series of annual grants and awards to assist with travel and equipment associated with ornithological research projects and student sponsorship.

For over 100 years the British Ornithologists' Union (BOU) has maintained a list of birds that have been recorded in Britain. This is undertaken by the BOU's Records Committee (BOURC), which periodically publishes up-to-date checklists incorporating changes the BOURC has announced in its reports published annually in the BOU's journal, Ibis.

In 1997, the BOURC liaised with the government's Joint Nature Conservation Committee (JNCC) to revise the categories used in the British List. The JNCC has adopted the list for decisions concerning to the status of birds in Britain in relation to the Wildlife and Countryside Act 1981. Responsibility for the British list lies with the BOURC. Northern Ireland has different legislation, and the list for Northern Ireland is maintained by the Northern Ireland Birdwatching Association (NIBA). The Isle of Man (which is not a legislative part of the UK) also maintains its own list which may be used by its own legislators.

Species recorded from the Republic of Ireland do not form any part of the British List.

The role of the BOURC

Records of birds new to Britain are passed to the BOURC by the British Birds Rarities Committee (BBRC) after that committee has examined them. The BOURC Secretary prepares a file summarising the record. The file also contains original descriptions and supporting documentation, including BBRC comments, correspondence from independent specialists, an analysis of the captive status of the species and its escape likelihood and extracts from books and journals referring to migration and vagrancy patterns. Records are circulated by post and require unanimous agreement on identification and at least a two-thirds majority on categorisation. All files are archived for future reference.

The Committee also studies taxonomic advances and initiates research into this field. Information on feral populations is monitored, and reviews are undertaken of older records. Anyone can ask for old or rejected records to be reviewed by the BOURC if they provide fresh evidence to justify re-examination.

This is time-consuming work, particularly when it involves detailed research or discussions with experts, who are often based abroad.

The BOURC publishes regular reports in Ibis, the BOU’s scientific journal. As few birders regularly see Ibis, information is press-released to the main birding magazines, who also receive pre-publication copies of the Ibis reports. The magazines use some of this information as the basis for news items or articles, but much of the BOURC’s work goes unreported. BOURC members occasionally write longer papers on species reviews and decisions for publication in the birding magazines. Decisions are notified to appropriate recorders and/or the original observers.

For BOU news, publications, events and more, check out the BOU Website www.bou.org.uk.

The BOU's international journal of avian science, Ibis, is available online at www.ibis.ac.uk.