The mystery breeding location for Scotland's only Taiga Bean Goose flock has finally been solved, Scottish Natural Heritage (SNH) announced this week. Through GPS tracking, their migration route has been found to cross Scandinavia to their breeding grounds in Sweden. Six Taiga Beans were fitted with tracking devices by scientists from the Wildfowl & Wetlands Trust (WWT), commissioned by SNH. The study is a collaborative project which also includes RSPB Scotland and informs the work of SNH and the Bean Goose Action Group.

The six geese were caught and ringed by experts at their winter quarters on the Slamannan plateau to help understand the threats facing one of Scotland's smallest flocks of geese. Taiga Bean Geese were once common in Scotland, but over the past 100 years or so they have become extremely rare. The Slamannan plateau, outside the village of Slamannan near Falkirk, is home to Scotland's only wintering population of these birds. The flock, usually consisting of around 250 birds, is one of only two that visit the UK in the winter — the second, in Norfolk, is much smaller. Bean Geese were first seen in the Slamannan plateau area during the 1980s, and their numbers and distribution have been monitored annually since the early 1990s — they tend to arrive in the area in late September each year and leave in late February. However, their decline across Scotland is a trend reflected elsewhere in Europe, with the total population having fallen from approximately 100,000 geese in 1995 to about 60,000–65,000 in 2008/09. 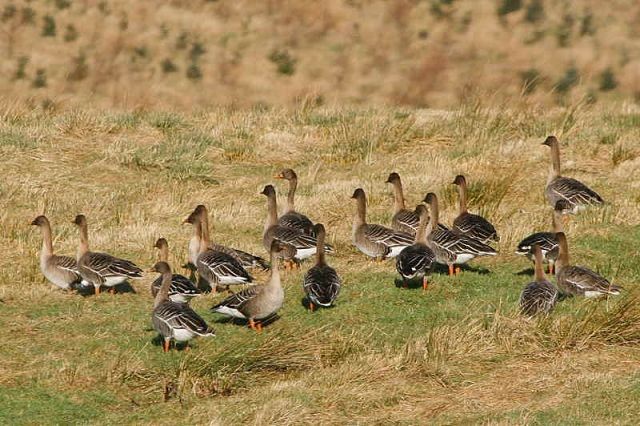 In this innovative project, the six geese were fitted with small 19g Global Positioning System (GPS) tags which revealed the location of individual geese each day. The scientists then built up a detailed picture of their winter feeding areas. In late February, the geese left Scotland and spent a month feeding on old stubble fields in Jylland, northwest Denmark, preparing for the next leg of their migration. In late March, the flock then travelled to fields 40km northeast of Oslo (Norway) to feed for two weeks, before moving a further 200km north, in mid-April, to their summering grounds in the forested Dalarna county of west Sweden. Here they have settled in what is thought to be their breeding grounds.

Two local schools, Slamannan and Greengairs primary schools, have followed the twists and turns of the birds' migration from tagging through to the complete GPS tracking programme, and are hoping to round this off with a trip for six or so of their students to Sweden in 2014. The children have been involved in Bean Goose project work for several years, and have learned about netting geese for tagging, GPS tracking, and international bird populations, as well as having made artwork, puppets and a short film about the geese.

Caroline Crawford, SNH project officer, said: "It was quite exciting to track the geese and finally learn their route home to breed after all these years. This information will be crucial to help us understand and protect these special birds. It was also terrific to have all the children involved, learning about these special geese and seeing their enthusiasm and wonderful art."

Carl Mitchell of The Wildfowl & Wetlands Trust added, "Understanding the daily movements and migration route of Scotland's only regular flock of Bean Geese in relation to proposed wind turbine developments is essential to safeguard this important population. Discovering important stopover locations on their spring migration and their breeding grounds has filled a huge gap in our understanding of the life cycle of these geese."

Angus Maciver of the Bean Goose Action Group commented, "It has been a very interesting winter following the distribution of the tagged Bean Geese on the Slamannan Plateau and relating that to our previous knowledge. Their spring migration has been exciting to watch with new information on the birds' whereabouts being discovered every other day."

Allison Leonard of RSPB Scotland said, "It's great that this technology allows us to inform conservation and education in this way. With each download from the collars, we have learned just a little bit more about the geese, helping us to protect them in their wintering and breeding grounds.