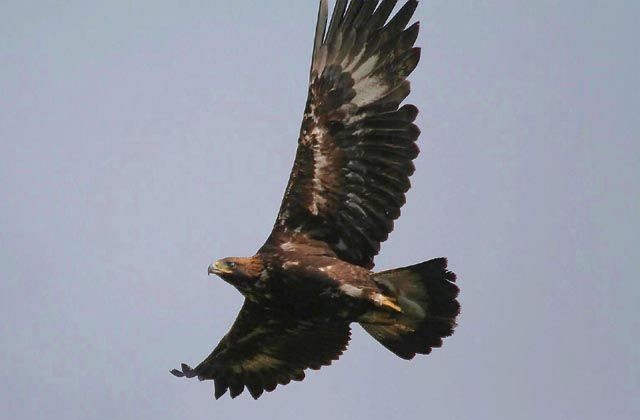 For the first time in Scotland one of the country's most enthralling wildlife spectacles is to be included as the centrepiece of an exciting new visitor attraction, which opens to the public tomorrow Sunday April 1st, 2007.

The unprecedented venture will allow nature enthusiasts to get up close and personal with Golden Eagles in their natural habitat among the inspiring craggy glens of Scotland's wild west coast.

RSPB Scotland in partnership with Ardnamurchan Natural History Centre will host the new attraction, featuring CCTV cameras trained on a deer carcass, allowing observation of wild Golden Eagles as they come in and feed. There will also be extensive new displays about Golden Eagles, in addition to the range of wildlife viewing opportunities that already exist at the Centre.

Golden Eagles have long been recognised by Scots as symbolic of the inspiring beauty of the country, capturing, as they do, much of what we believe to be the very best aspects Scotland. It is for this reason that last year RSPB Scotland lobbied to have the Golden Eagle recognised as the National Bird for Scotland.

At the time, Culture Minister Patricia Ferguson said that she was concerned that visitors to Scotland might be under the impression they would be guaranteed to see a Golden Eagle. Unfortunately that can't be guaranteed even with this new project, but this certainly is the best chance people have of seeing one up close, in its natural habitat, and hopefully will provide a major tourism boost to the area as its reputation spreads.

On Mull a similar project allowing people to view White-tailed Eagles has become a firmly established tourist magnet, pulling in hordes of wildlife enthusiasts and boosting the island's economy by as much as £1.7 million annually, according to a recent economic assessment.

Thousands of people come to Scotland every year specifically to see majestic Golden Eagles soaring at the head of our glens and heather clad hills, and the sight never fails to amaze. The last census of Golden Eagles, conducted in 2003, revealed there are 400 pairs in Scotland The birds choose to live among the grandeur of rugged mountains, craggy glens and beautiful lochs. Using its natural resilience, intelligence and supremely adapted senses, the Golden Eagle has survived in this environment in spite of periods of persecution and hardship to win international regard.

Dave Sexton, RSPB's Mull and Ardnamurchan officer, said: "Golden Eagles are without doubt one of the most awe-inspiring species in the UK, and if you are lucky enough to glimpse them in their natural habitat the sight will not fail to astound. The sea eagle reintroduction on Mull has been a huge success, and many people come to this part of the world now with wildlife watching in mind. The economic benefits for Mull have been fantastic and, hopefully, this will be repeated in Ardnamurchan.

"Most people in Scotland would think of the Golden Eagle as our most iconic bird, and it’s great that people will have a chance to see them in the wild here, as well as learning about their place in the wider environment and the threats they face."

Ritchie Dinnes, manager of the Ardnamurchan Natural History Centre, said: "The eagle viewing gives a new dimension to what we offer at the centre and we're hopeful it will be a big draw for visitors. Already lots of people ask about where they can see Golden Eagles, and now we'll be able to give them a chance to see them as well as talk about the species and nature conservation. At the centre everything we try and do ties in - we serve local food, we promote the area's natural assets and talk about sustainability. Hopefully, visitors will agree that you can't get much better than taking what's special that you have in an area and showcasing it as well as you can."

The project, which will be the newest 'Aren't Birds Brilliant' site, designed by the RSPB to offer a range of opportunities for the public to get close to birds around the UK, will open to the public on Sunday 1st April.

More information on Ardnamurchan natural history centre can be found at www.ardnamurchannaturalhistorycentre.co.uk .
Written by: RSPB
Login to leave a comment
Return to List