The Ascension Frigatebird has been found breeding again on Ascension Island, a UK Overseas Territory, almost 180 years since it was last recorded there. The species was previously confined to the outlying Boatswain Bird Island, which is just 1km2, for decades. The seabird population on Ascension Island numbered into the tens of millions until it was devastated by cats introduced onto the island in the early 19th century to control introduced rats and mice.

The RSPB began a project to remove feral cats from Ascension Island in 2002. The project was supported by funding from the Foreign and Commonwealth Office and the island was formally declared feral cat-free in 2006. Ascension Island is a small and remote volcanic island in the South Atlantic, rich in unique flora and fauna. At the time of its colonisation by Europeans in 1815, it was thought to host 20 million seabirds, including the Ascension Frigatebird. Nowadays, the frigatebird is a globally threatened species found nowhere else in the world; it is one of 33 globally threatened British birds found in the UK's Overseas Territories and is considered Vulnerable to Extinction by the IUCN. 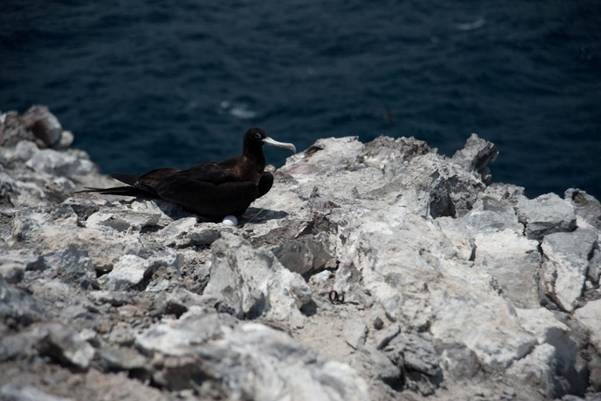 Dr Tim Stowe, the RSPB's International Director, said, "This is the news we have been waiting for since starting the project more than a decade ago. Many species in the UK Overseas Territories are threatened by non-native species and this project marks a landmark in conservation. Ascension is the largest inhabited island where feral cat removal has been attempted and proved successful. What a wonderful Christmas present."

The discovery of breeding frigatebirds was made by members of the Army Ornithological Society, together with members of the Ascension Island Government's Conservation Department. Ascension Frigatebirds are sometimes called 'Man O'War' birds or 'Pirate Birds' because they steal other birds' food in flight. They are almost as big as albatrosses but, although seabirds, can't swim. The adult male is black overall with a glossy green and purple sheen. During courtship it develops a bright red gular pouch (a flap of skin) that inflates to form an impressive heart-shaped balloon. The adult female is more rusty-brown, particularly around the collar and breast, and some individuals have patches of white on the breast and abdomen.

Derren Fox from Ascension Island Conservation said, "We were out with the Army Ornithological Society to work on some other seabirds in the area when Andrew Bray from AOS came up to us with a photograph of the bird on a nest. We were all incredibly excited and went to see the site and survey for further nests in the area. It's a great moment for Ascension conservation and a superb example of collaborative work between the FCO, RSPB and Ascension Island Conservation."

A Foreign and Commonwealth spokesperson said, "We are delighted at the news that, after almost 180 years, the frigatebirds have returned to Ascension to breed again. The feral cat eradication project has been a real success and we are grateful to the RSPB for their skilful management of the initiative. This is great example of the practical impact of the UK's wider commitment to working with the Territories and environmental partners to protect the biodiversity of crucial habitats. The UK underlined that commitment with the recent launch of 'Darwin Plus', a £2m fund to support environmental work across the Territories. We very much hope to see more innovative projects take advantage of this and help further safeguard the extraordinary biodiversity of our Territories."