A single Hen Harrier has successfully fledged at Geltsdale RSPB, Cumbria, for the first time in a decade, from one of England's three successful nests this year.

The male bird, named Bonny, was the only chick to hatch from a clutch of five eggs at the North Pennines reserve and is one of only seven to fledge in the whole of England this season. The other chicks fledged from two nests in Northumberland.

Hen Harriers are on the verge of extinction in England, resulting from ongoing illegal persecution on some grouse moors, and Bonny's survival has been a classic tale of triumph over adversity, defying the odds at every turn. 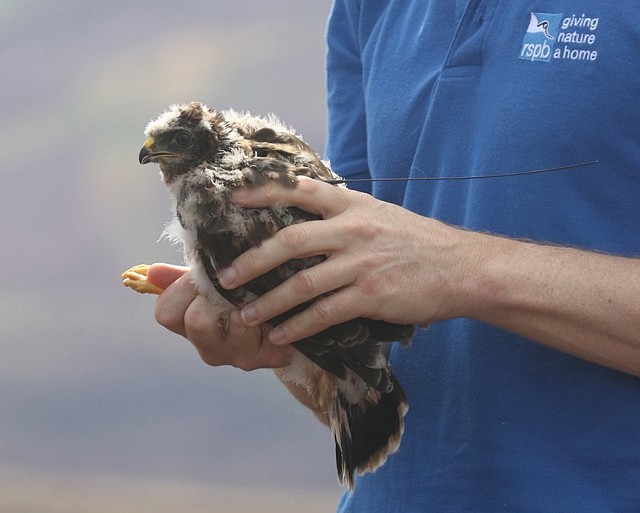 Blanaid Denman, the RSPB's Hen Harrier LIFE Project Manager, explained: "Bonny's mother arrived at the reserve back in May looking for a mate but she had to wait several weeks for a male to turn up. When one finally did appear, she was not impressed.

"He was young and yet to gain his adult grey plumage. Normally, in a healthy population of Hen Harriers, an immature male like this wouldn't get a look in. But with so few birds in England, the female had little option but to accept his advances or leave breeding to another year."

Once it had been confirmed there was a nest, RSPB staff and volunteers mounted a 24-7 watch and provided supplementary food under licence, to ensure that the family of raptors had the best possible chance of survival and success.

Denman continued: "The supplementary food proved vital as the inexperienced male was hopelessly inattentive of his dependent female, often vanishing for days before reappearing with a paltry food offering. The extra food ensured that the female never had to go far from the nest to feed Bonny or herself."

Bonny has already achieved national fame as its name was selected by nature TV presenter Chris Packham from over 2,300 entries to a competition run by LUSH cosmetics, to celebrate the incredible £122,000 raised by their 'skydancer bathbombs' to support Hen Harrier conservation.

The bird is one of a number of Hen Harriers to be satellite-tagged as part of RSPB's Hen Harrier LIFE Project across England, Scotland and the Isle of Man this year. Once he has left Geltsdale in a few weeks, it will be possible to follow his movements online at rspb.org.uk/henharrierlife or @RSPB_Skydancer.