Gannet numbers on the up

A study of Gannets off the north-west coast of Scotland has found that the birds' numbers have increased rapidly over the last decade.

The news comes hot on the heels of the announcement in February that Bass Rock, Lothian, had taken over from St Kilda as the world's largest Gannet colony. The latest results confirm that Scotland — and particularly north-west Scotland — is nevertheless an extremely important region for the species.

The survey, commissioned by Scottish Natural Heritage (SNH), found that Gannets nesting on Sula Sgeir increased at a rate of more than 47% per year. On the Flannan Islands, the growth was 7.5% per year. Numbers changed very little on St Kilda (now the world's second-largest Gannet colony) and Sule Stack. 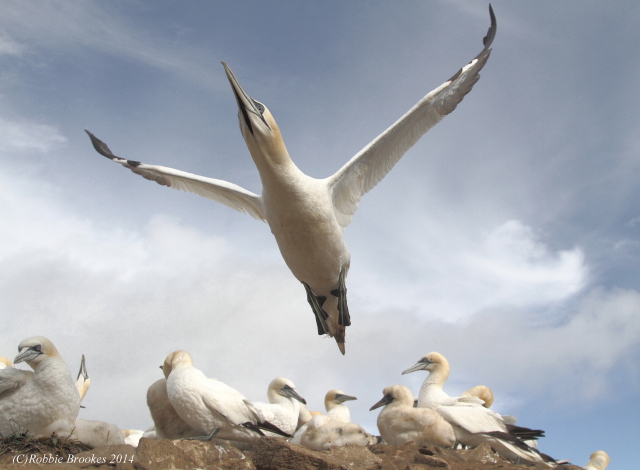 The good health of Gannets across Scotland may be explained by their foraging behaviour. They can fly for great distances in search of food, and are able to take a wide range of prey species — features which may make them more resistant to changes in the marine environment compared with other birds. They also usually nest at sites which have few predators, have produced lots of chicks over the past decade, and have high survival rates.

Both Sule Skerry and the Flannan Islands have plenty of unused but suitable nesting habitat, and this may explain why the number of gannets in these particular colonies has increased. This contrasts to the stable numbers on Sule Stack, where pairs already occupy all the suitable breeding areas. This may lead to Gannets establishing new colonies, as has already occurred at Sule Skerry, and may also be happening at Barra Head.

Eileen Stuart, SNH's head of policy and advice, commented: "Scotland has internationally important populations of seabirds, and Gannets in particular, so it's vital that we monitor how they're faring. The survey is especially good news as gannets are, like many seabirds, of conservation concern."

The latest seabird census needs volunteers to count seabirds around the coastline; to volunteer, contact the Seabird Group at www.seabirdgroup.org.uk.