Among the birding community, Spurn needs no introduction. One of the most iconic wildlife sites in the UK, this Yorkshire Wildlife Trust owned National Nature Reserve is a complex mix of habitats including coastal saltmarsh, coastal sand dunes, mudflats and lowland meadows. Protected by a range of national and international designations, Yorkshire Wildlife Trust manages this large site and nearby Kilnsea Wetlands to meet specific habitat prescriptions set out in management plans, governed by Natural England and to help visitors enjoy the wildlife of the site and its uniqueness.

Spurn is arguably one of the best mainland sites in England to witness visible bird migration and the sheer scale of this can be breathtaking. On some days, tens of thousands of migrants can be seen passing down the peninsula. Its location jutting out across the mouth of the Humber Estuary into the North Sea acts as both a first landfall and the end of a funnel created by the East Yorkshire coast and the outer Humber Estuary. The expanses of the Humber Estuary provide a key staging post for waders and wildfowl both on migration and during the winter months. Due to its location and the commitment of local and visiting birders, many rarities are discovered in the area, most recently Yorkshire's first (and the UK's third) record of Masked Shrike. 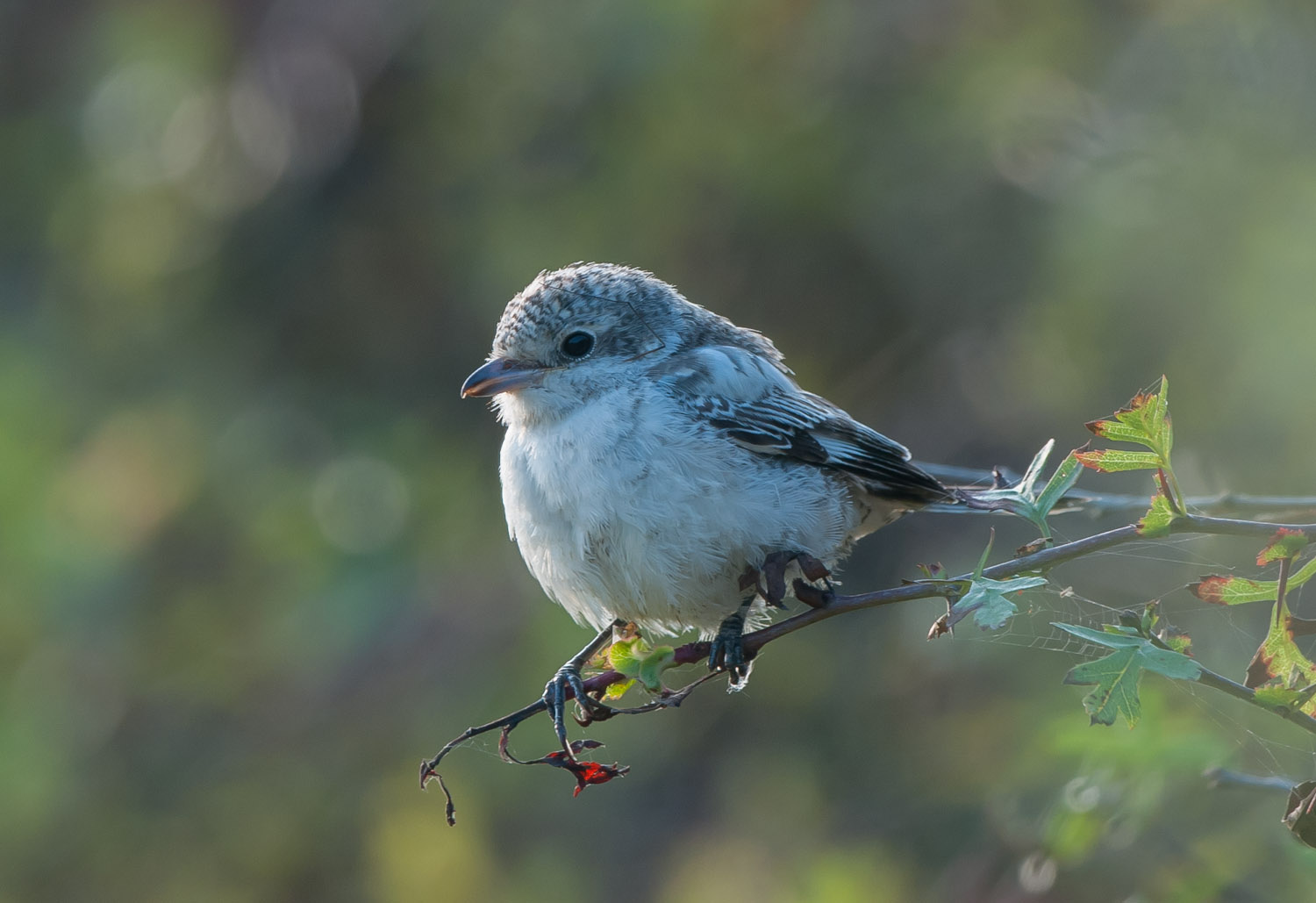 Spurn has always been a challenging site to manage. It is a dynamic place, with the site changing with the tides and the weather. In December 2013, the huge tidal surge breached the peninsula and washed away a long stretch of the road that runs to the point. This presented a major challenge to the Trust and its tenants including the RNLI and Associated British Ports who run operations at the end of the point. The Trust is monitoring the beach height carefully but until the land stabilises it will be impossible to replace the road. Earlier this year, Natural England funded a vehicle which has allowed the Trust to cross the unstable soft sand, mud and gravels of the breach. While bought primarily for logistical reasons, the vehicle has also been used to great effect to run guided tours, something which was heralded a success at this year's Spurn Migration Festival.

Besides the obvious effects of the loss of the road, more subtle changes are occurring. Those who took part on the guided tours to the point during the Migration Festival and on Trust-led events will have noticed the road was lined with the yellow and white flowers of perennial wall-rocket and sea rocket. A visitor who had been coming to Spurn for decades commented it was one of the best displays of flowers she had ever seen on site. The power supply was also lost and the power company took the decision to remove the long line of poles and wires and bury them below ground. Sadly, this means no more reports of 'a Wryneck at Post 53' but it does reduce the hazard to low-flying birds crossing the peninsula in poor visibility.

One of the possible effects of reduced visitor pressure could be the return of ground-nesting birds on the peninsula itself. Little Terns, Oystercatchers and Ringed Plovers should breed along the beach but the level of disturbance has been too great for this to happen in recent years. Lower visitor pressure at the southern end of the peninsula will make it easier for the Trust to reduce the impact of people during the breeding season and give these birds a chance to nest, by re-routing paths at key times. A reduction in disturbance will also benefit the large numbers of waders which use the Humber for feeding during migration and the winter. High tide wader roosts can be disturbed easily and the Trust is keen to try and minimise this. 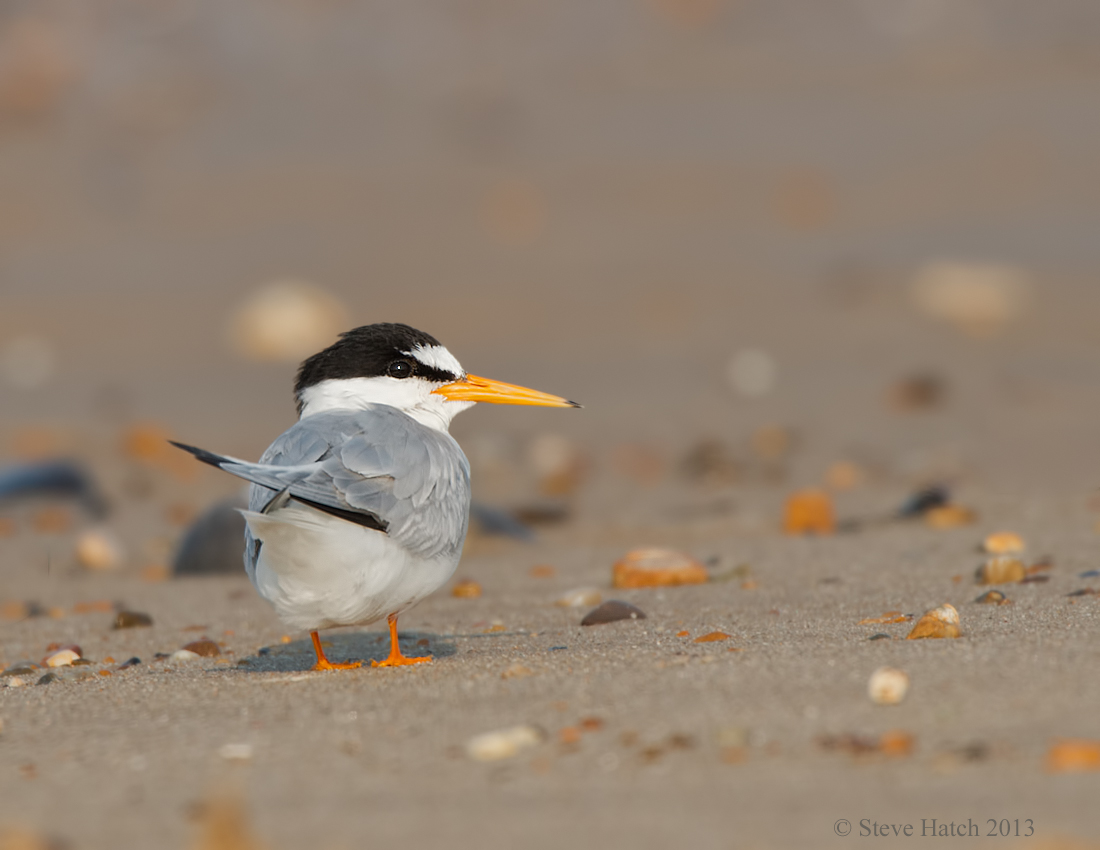 Up until the surge last year, Spurn received between thirty and seventy thousand visitors a year with more entering unrecorded. Many of these visitors are birders, especially during spring and autumn, but at other times of the year people visit for a variety of reasons, including that it is simply the 'end of the road'. Most birders will understand the need to avoid damaging habitats or disturbing wildlife unnecessarily, but many visitors to the site need guidance on how to enjoy this unique place without causing damage. With the loss of the road, the Warren area at the north end of the site becomes very busy at peak times with large numbers of cars squeezing into a small area, adjacent to the old war buildings as well as lots of people birdwatching or setting off on walks.

It has become very difficult for Yorkshire Wildlife Trust to manage the visitor pressure under these new circumstances. The tidal surge also flooded the Warren area, undermining some of the already-condemned derelict buildings. The Warren Cottage which the Trust leases to Spurn Bird Observatory was unaffected. Earlier this year, E.ON confirmed they would make funding available to Yorkshire Wildlife Trust to build a new visitor centre to replace the buildings at the Warren. This will allow the Trust to better manage the visitor pressure and to help conserve Spurn's wildlife. A modest visitor centre would also enable the Trust to generate income from visitors helping towards the large maintenance and insurance costs of this large site. As a charity without direct government support, the Trust has to raise every penny they spend on wildlife conservation. The centre is expected to generate enough income to cover its running costs.

Yorkshire Wildlife Trust has spent many months working with ecologists, government agencies and experts to identify the best location for the visitor centre in order to eliminate or minimise the impact on wildlife and the local community. Not only will the centre benefit wildlife, it will increase the understanding of the importance of the wider Humber Estuary for wildlife and thus increase support in the wider community for its protection.

The favoured location is a small area of grass, the Triangle Field, at the southern end of a piece of land known as The Triangle, which is bordered by the canal: a linear borrow put dug to provide material for the adjacent Humber floodbank. The centre is a modest building, to be built on stone gabions with a floodable undercroft used for storage and toilets. A footpath will run through existing scrub along an established route to the entrance to the Canal Scrape car park where visitors will cross the road to a new car park which will run parallel to the road towards the village. The car park will be screened with newly planted scrub and will remove the need for people to park along the road and verges, which is a source of frustration to the local community and also hazardous.

Associated British Ports will be incorporating a radar tower into the footprint of the building. As their operation at the end of the point is currently untenable, they will be moving their operations and require a radar scanner to be positioned within the Triangle area. Locating this within the footprint of the building avoids a double impact on the area.

Virtually no existing scrub will be removed through the build or operational phase of the visitor centre. Scrub plus the existing bund around the canal will screen the building from Kilnsea village, something that would not be possible with a building sited further north. Signage and paths will draw people away from the sensitive Humber bank towards the coast and then south towards the Warren area, thus reducing the existing visitor impact along the Humber banking. The centre itself will offer a modest café (with a menu to compliment the offer at the pub nearby), an education room for use by visiting school and community groups and an office, as well as interpretation about Spurn, the wider Humber Estuary and renewable energy, with views over Canal Scrape, the river and the coast. A new ringing laboratory and storage has been offered to the Spurn Observatory Trust.

As part of the visitor centre project, the derelict buildings at the Warren will be removed, except for Warren Cottage. The whole of this area will be re-naturalised with scrub and dune vegetation, providing superb cover for migrant birds and great opportunities for birding. In the bay opposite the Warren Cottage a viewing screen will be installed temporarily to reduce the impact of visitors standing on the bank top and also to provide a shelter for birders wishing to view from this point.

Two parking bays will be left for Warren visitors but otherwise, no cars will be parked here once the new car park is open to ensure this area is as wild as possible. Moving back north, scrub will planted extensively in the grass field to the north of the Warren and then further scrub planted along the road, to link the new habitat at the Warren to the scrub at the south end of the Triangle and around the new car park. All in all, there will be a major gain in scrub habitat for migrant and breeding birds. To the north of the canal, the Well Field has successfully attracted some of the waders from the nearby Special Protection Area and the Trust plans to construct additional scrapes to increase the habitat available. 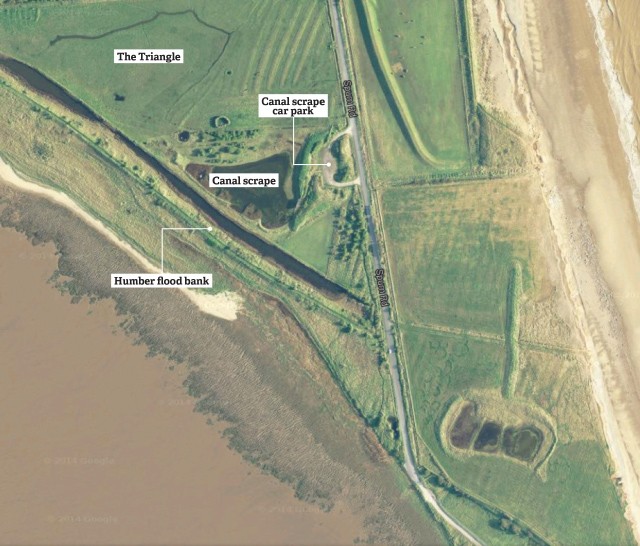 Aerial photo showing the southern end of the Triangle as it currently looks. 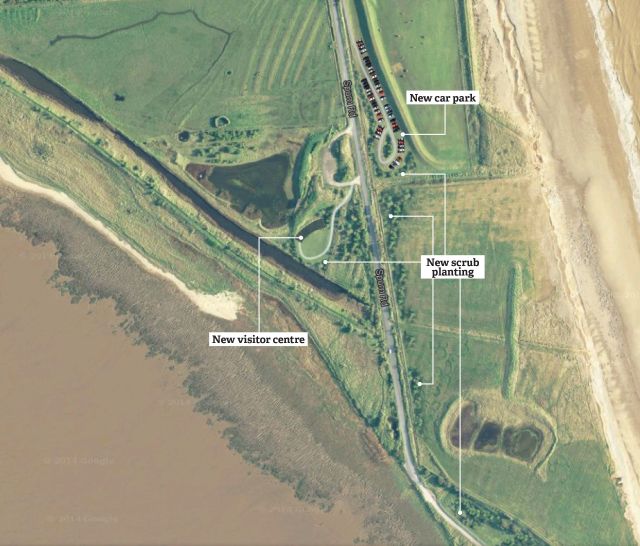 Artist's impression of what the southern end of the Triangle will look like with new visitor centre and car park.

The Trust feels that the new centre will lead to a brighter future for Spurn's wildlife but is aware that the chosen location is contentious among some local birders. The Trust believes that having considered all the options, the favoured location provides the best opportunities to ensure there is no impact on the SPA, wildlife habitat and local people living in Kilnsea. Of course change does bring an impact. The southern end of the Triangle will look different, but there will be much better opportunities for people to see birds from the centre.

Engaging with more of Spurn's visitors — both birder and non-birder — will reduce the impact of visitors on the wildlife of the site, and increase the profile of both Spurn and the Humber as a vital place for birds and other wildlife. As part of the landscaping around the Warren, the new car park and the centre, there will be a net gain in habitat with the mix of new grassland and scrub being particularly attractive to migrant and breeding birds.

Yorkshire Wildlife Trust is a charity dedicated to wildlife conservation. The Trust is working hard to ensure Spurn's wildlife and environment is conserved and the public can visit safely, learn about the importance of the area for wildlife While minimising disturbance to birds and other wildlife. The Trust hopes that birders will embrace these changes, weather the short term change, and realise the long term benefit they will bring to both Spurn and the Humber. The Trust would welcome views from birders. Please email spurn@ywt.org.uk.